FestivAll: 15 Ideas For Next Year

Okay, FestivALL was great, no bones about it, but here’s a list of 15 ideas, things that I think could make next year’s FestivALL even better! These are constructive criticism and positive suggestions, with the whining kept to a minimum:

1)  The stages should be farther apart.   It was great that there was so much stuff going on around Capitol Street, but the Northernmost stage suffered from being too close to the music at the Davis Park Gazebo. Maybe the Allied Artists tent and the North Capitol Street stage could be relocated next year.  Summers Street at the Slack Plaza could be a  good location,  unless the Gitmo-chic butt spikes at Slack Plaza scare away some folks.  END_OF_DOCUMENT_TOKEN_TO_BE_REPLACED

About That Wrestling Show

It’s looking like a late emergency may keep me from attending the show tonight in Logan, but that shouldn’t stop any of you from making the drive. If you go, tickets will be fifteen bucks, it’s at Logan High School, and say “Howdy” to Pondo, Juggz, and the guys for me.

Friday Night At The Sound Factory: My Take

Wow, when I sat down to write this post, I didn’t even know that my fellow Gazzblogger Bill Lynchwas also at the Sound Factory last Friday night (Bill, when you see me out, come up and say “Hi’–once I’m in a bar for more than five minutes the tobacco smoke has usually rendered my field of vision to about three feet–I can’t see anybody!).  I’d been trading emails with the guys from Seven Minutes to Midnightfor months, as I’ve

been courting them to be my guests on Radio Free Charleston.  This was my first chance to see them live.  Doctor Senator(I love the name) was an unknown quantity.   I settled in near the stage and hung out with Justin, Roy, Thomas and Ed from Seven Minutes while Doctor Senator took the stage. END_OF_DOCUMENT_TOKEN_TO_BE_REPLACED

That flood of articles concerning the arts in town and my FestivAll coverage has fallen behind as I’ve been dealing with a case of tobacco-induced bronchitis and work on episode 23 of Radio Free Charleston.  However, my afternoon is cleared, so get set for some first-class PopCulting.  I’ve got to tell you about the great bands I heard at the Sound Factory last Friday (who apparently didn’t impress Bill Lynch as much as me), and make some suggestions about FestivALL that could kick it up a notch. Plus I’ll have an edible Cool Thing Of The Week. Check back all day, because this afternoon I’m heading hoping to head to Logan to watch Mad Man Pondo wrestle The Honky Tonk Man!

It’s amazing the monkey wrenches that can get thrown your way when you’re writing a blog post.

In honor of FestivALL 2007, which just wrapped up yesterday, we’re going to kick off the week with guest art, courtesy of Radio Free Charleston Big Shot, Melanie Larch. Here, bisected into two parts so that it would fit on YouTube, is Melanie’s FestivALL memories compacted into a nice, neat little ten-minute video package. We had a blast at FestivAll this weekend, and I had a blast not being the video guy (except for a few shots). Mel even composed and performed an original tune in honor of the FestivALL Catfish.

I was just a lazy boy this weekend, sitting back and soaking in as much as I could without actually doing anything. Mel did all the work on this report.  So my art will be back next Monday, and since you can’t put a YouTube clip on a T Shirt you’ll have to wait until next week to resume ignoring my Cafepress store.

Let’s let Mel take over. There’s one brief bit in this film that may not be work safe, but it’s really too funny to miss:

I attended the Gazz Gathering panel on the role of the Arts in Charleston Wednesday night, and it was a raucous discussion.  Not boring at all.  It was a bit unfocused, and most of the people taking part totally missed the point, but several key questions were raised and almost addressed. This is the first of a few essays I’m going to drop here in PopCult that address some of the challenges facing the Charleston arts scene.

Sadly, at the panel discussion the other night, the local arts community, as is its wont, quickly fell into the “circular firing squad” mentality, lobbing barbs over how the funding for FestivAll was dispersed among the various disciplines and then winding up with the cliched bitching about the Clay Center that always seems to happen at these things.  Folks, I  have seen the enemy, and it’s NOT US! END_OF_DOCUMENT_TOKEN_TO_BE_REPLACED

With FestivAll, there’s way too much cool crap going on this week.  I’m going to try and list a bunch of examples of  the overflowing cornucopia of coolness cascading down upon our carcasses concurrently, but I can’t claim to be complete.  It’s not all FestivAlliciuos, either, but let’s dive in!

First of all, there’s the ART WALKtonight.  Galleries all over town will be open, some with musicians performing, so that art aficionados can wander all over the city and soak in all the creativity.  It’ll be like getting hooked up to an IV full of art.  Coolness abounds, and is compounded by the second anniversary of The Purple Moon, West Virginia’s only Atomic Age Emporium.  I was just in earlier today and they have an amazing assortment of new retro coolness, including some vintage movie posters and the wonderful artwork of Felix Krysak.  END_OF_DOCUMENT_TOKEN_TO_BE_REPLACED Let’s kick off FestivAll Week with a self portrait by yours truly!  Not that I’m deserving of special treatment or anything, but the fates have conspired to pry me loose from my computer at a time when I really, really need to be hard at work.  That whole idea about making Radio Free Charleston weekly in June? It’s out the window.  Episode 23, the Feast Of Stephen reunion, will be delayed at least one week while I tend to a family illness.  That same family illness has kept me from coming up with anything in the way of Monday Morning Art this week, so I’m sticking up this digitally-assaulted frame grab of my ugly mug from episode 22 of RFC.   Click on it to enlarge the pic, if you have a masochistic streak.  Links for the Monday Morning Art store will be posted here in the event that I get the time to update that site in the next day.  I’d go into more detail, but I gotta get going.

A Couple Of Cool Things Of The Week

Lotsa coolness this week, so let’s dive in. 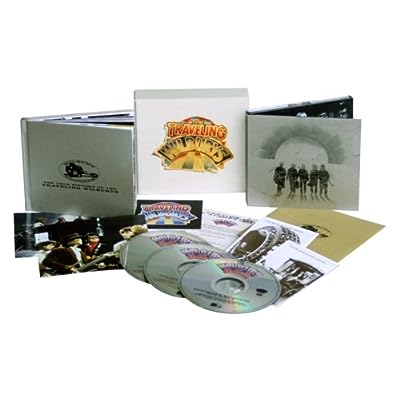 First, there’s the coolness from last week that I never got around to posting.  In stores now is the reissued complete works of The Traveling Wilburys!  Courtesy of Rhino Records, you can now get your hands on the music made by the ultimate supergroup without spending your rent money on eBay.  Unavailable for ten years, the two Wilburys albums, “Volume 1,” and “Volume 3” have been collected in a variety of deluxe formats with annotated notes and bonus cuts and video.  In case you forgot, the Wiburys were George Harrison, Bob Dylan, Roy Orbison, Tom Petty, and Jeff Lynne.  This was the sound of them just having fun, and some people have come to the conclusion that this is perfect music.  Perfect for what, they won’t say, but they stand by the claim. Also cool this week is The No Pants Players, fresh from eating a watermelon on the latest Radio Free Charleston, the mountain state’s only comedy troupe returns to their home base a the Labelle Theater in South Charleston for shows on Friday and Saturday night.   Tickets are six bucks.

Opening for the NPP on Friday will be current RFC musical guest, the acoustic duo Aurora.  During intermission you can hear future RFC guest Joe Slack.  Saturday night the music will be provided by another future RFC guest, In Formation.  The shows start at 7 PM each night.

Episode 22 of Radio Free Charleston is online now!  At the head of this post you can see a wild music video from Voices Of Anatole, a breezy acoustic duet from Aurora, brand-new computer animation from my brother Frank Panucci, and The No Pants Players eat a watermelon.

RFC 22 is called “Shark Boy Shirt,” named after the shirt I bought from Shark Boy himself at the IWA East Coast show, “Skate Or Die” a few months ago. It’s a cool-looking tie-dye job, and it doesn’t make me look too fat (not as fat as the stomach does, anyway).  The host segments were shot on the banks of the mighty Kanawha River, near the Dunbar bridge.

The No Pants Players are old friends of RFC, dating back to our very first video episode last year.  They’re back with a short film they shot at Kanawha State Forest, “The No Pants Players Eat A Watermelon.”  I’d like to report that no watermelons were harmed during the production of this film, but, sad to say, that just wasn’t the case.  Poor little guy.  He never stood a chance.

I first heard Aurora at a recent show at the Labelle Theater, and you can catch them there again Friday night, opening for the No Pants Players.  I thought it would be a kick to snap up these promising young talents for the show before they go on to become world famous.  Jonathon and Laura, also known as “Captain Crash and the Beauty Queen From Mars” came in on a hectic Friday, and nailed the song in one-and-a-half takes (the half-take was due to microphone placement issues).  Aurora, aside from sharing their name with one of my favorite toy companies from the 1960s, are the youngest performers we’ve had on the show so far.  I think you’ll get a kick out of the breezy, delicate tune, “Hazel Eyes.”

Frank’s cartoon is “No Running,” the tender tale of youthful robot exuberance and parental rebellion.  And falling down the stairs….for a very long time

In the headlining spot for this episode is Voices Of Anatolewith the video for their song “Se7en.”  They’re great guys, plus I got

to meet Holly Siders, who directed the video for Screaming Butterfly Productions.  We hope to feature more of her very impressive work in future shows.  I can not praise her work loudly enough. She’s doing some really incredible stuff, and like RFC, she’s doing it with a limited budget.

At some point we also want to bring Voices Of Anatole into LiveMix Studio for an RFC shoot.  They have an amazing sound, which is sort of obvious if you’ve been following the local music scene.  It was a coup to get them for the show right after they opened for Godsmack. The video for “Se7en” is an amazing piece of work, very imaginative with a great song and way cool visuals married into a perfect whole.  We’re lucky to have it for the show.

That’s the story of the show.  Go to the Radio Free Charleston MySpace page for more inside information.