Into each year a little suck must fall, and 2008 was certainly no exception. There were plenty of things/places/people and events that sucked in 2008. Let me strap on my curmudgeon hat, as here, in no particular order, we present the PopCult Universe list of 50 things that sucked in 2008.

1) We have to start off heavy.  The death of Randy Lee Walden sucked. I did not have the honor of knowing Randy for very long. Mel and I recorded the first performance by his new band, Quick and Dirty, in May, and in early July we attended his funeral in Poca. Randy was a major talent on the verge of breaking through in the Charleston music scene, and PopCult extends its deepest condolences to Randy’s family and band-mates. We are planning to do a second tribute episode of Radio Free Charleston dedicated to Randy early in 2009.

2) The economy. The reasons are myriad, the blame easy to spread around. All we know is that things are tough all over.

3) Black Ice. You can take your White Christmas and Winter Wonderland and stick them up your….

4) Steve Gerber dies. The creator of Howard the Duck and one of the most original writers in comic books. Sadly, most people will know him from that awful movie that George Lucas made out of “Howard.” Nobody who saw that movie should have been surprised by Jar Jar Binks.

5) Computer programs that automatically convert emoticons into little graphics of smiley faces. I mean, seriously. The whole idea of an emoticon is only marginally clever as it is. “See, if you look at it sideways, it’s a smiley face!” Do we really need to dumb it down even farther?

6) Danny Jones’ obsession with closing Kanawha Boulevard at the drop of a hat. What next–a six-day gathering of Yugo enthusiasts?

7) Dick Cheney makes an idiotic remark about West Virginia. See his apology below:

8) Ringtones. People spend money to subject me to bad music before they start talking loudly in public. I hate ’em.The ringtones that is. The people I simply hold a sneering contempt for.

9) Bettie Page passes away. Farewell sweet Bettie. At least you finally got to earn some money off of your image. And as you can see at left, it was quite an image!

10) No third season of “Rome” on HBO. I know the decision was made a couple of years ago, but it still sucks.

11) “Smash Lab” on The Discovery Channel. So the folks at Discovery wanted to duplicate the success of their hit show “Mythbusters.” They looked at Mythbusters, which cleverly examines urban myths in the name scientific skepticism, and has appealing, intelligent and engaging hosts, and decided that people were watching it because they blow sh*t up. So they created “Smash Lab,” a program where people blow sh*t up. It not only sucked….it blew. 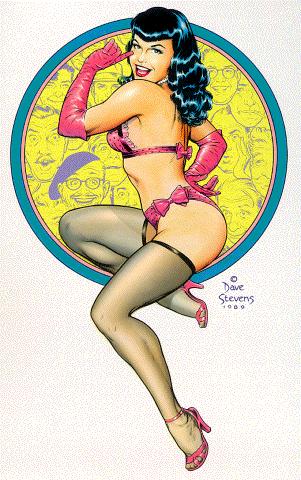 13) Dave Stevens dies. One of the best artists to grace the comic world, the creator of “The Rocketeer,” and the man who introduced Bettie Page to a new generation of fans before becoming her close friend, passes away. That’s one of his depictions of Ms. Page at the right. You can see another one above.

14) The Power Alley Grill. I will never eat there again, even if they offer me free food.

15) The Taco Bell in Spring Hill. Ditto. Better to go to Patrick Street and dodge the gunfire.

16) No impeachment. Come on! You know he’s still going to try and pardon everyone in his administration. You could’ve at least introduced the articles to stop that from happening.

18) Frank Miller’s “The Spirit.” This one pains me. I’ve been a fan of Miller’s for 30 years. Frank, you blew it. This is “Sin City Lite,” not Will Eisner’s classic character.

19) The Yankees didn’t win the World Series in their final season at the original Yankee Stadium.

21) I won’t name names, but at the Sound Factory during Regatta I heard the single worst band that I’d ever heard in 30 years of listening to live music.

22) Adding insult to injury, they were playing between sets by two of my favorite local bands, so we had to sit through all of their awfulness.

23) On top of that, The Sound Factory was not enforcing the smoking ban, so the place stank, both musically and literally. 24) Uninflated inflatable Christmas decorations. You know, when you turn those things off, it looks like you have a yard full of giant discarded condoms.

26) That toupee I wore on the April Fool’s episode of Radio Free Charleston.

27) The events surrounding the filming of that episode, which you can read about here.

28) Theives and Plagarists in general.

29) Being offfered Mayonnaise. Keep dat stuff away from me!

30) People not buying stuff from the Monday Morning Art store.

31) People who camped out all night to buy “Chinese Democracy” and then expect you to be equally excited about it even though you never really cared for Guns and Roses in the first place.

32) Having to admit to those people that you sorta like “Chinese Democracy” after hearing it.

33) People who think that Sarah Palin is the future leader of anything resembling a major political party.

34) The fact that, with all the advances in HD and digital television technology, there still isn’t a filter switch I can flip to insure that I never see Rosie O’Donnell, Dane Cook or Larry The Cable Guy on my TV ever again.

35) People who gloat about Blu Ray winning the HD DVD format war, as if they had a personal stake in the outcome.

36) The verdict in the Mattel vs MGA Toys (Barbie vs. Bratz) case. This sets a precedent that could take all the power of trademark and copyright law away from the individuals and shift them to corporations.

37) The fact that I didn’t have as much time to write about the toy industry in 2008 as I wanted.

38) IWA East Coast and Mid South sweetheart Mickie Knuckles breaks her leg just weeks after signing with national fed, TNA. Hopefully Mickie (known as “Moose” on TNA Impact) will be back in the ring soon.

39) Virgin Comics goes belly-up. You know things are bad in the comic book industry when Richard Branson says he’s losing too much money to keep the company afloat.

40) Steve and Barry’s goes bankrupt. For years people wondered how they managed to make a profit with such low prices. Simple– they never did.

41) Fox pulls the plug on “4 Kids,”  their Saturday morning block. It will be turned over to local affiliates next year and used as a dumping ground for “educational” programming and infomercials.

42) Deep Discounters stop discounting deeply. At some point last year, things changed and prices at Dollar General, Family Dollar and Big Lots raised to the point where most things for sale there can be found cheaper at Wal Mart or K Mart.

43) Gas soars above four bucks a gallon. I know the price came back down. I guess all it took was a handy global economic meltdown.

44) Are those wars EVER going to end?

45) “Flo,”  the check-out girl from the Progressive.com car insurance commercials is not a real person. She is portrayed by actress Stephanie Courtney. For some reason this bums me out.

46) People who get overly sensitive when you crack a joke about “Create WV.” Guys, I was creating a joke about how the orange cone is also representative of an obstacle that you have to go around. Lighten up.

47) People who rave about how much they like Radio Free Charleston, then sheepishly admit that they only watched the episode that their band was on.

49) No “adult cabaret” night during FestivAll. How about we bring that back in 2009? It was the highlight of FestivAll 2007.

50) The closing of O’Kay’s and the sucky year all around that befell Kay Sullivan. Here’s hoping this classy lady sees a well-deserved reversal of fortunes in 2009.

Tomorrow Ramble Week winds down when we revisit the ghosts of PopCult posts past.