Photos From The Manna Meal Dance Party And More St. John’s Episcopal Church was the scene for the All Vinyl Dance Party and Art Auction held to benefit Manna Meal last Saturday evening.  Despite being delayed for a week due to the snow, the fundraiser was a huge success.

DeeJays Mark Davis and John Nelson spun the tunes, and it was great seeing tons of friends from the Charleston art and music scene. Manna Meal is, of course, a great cause, feeding people in need. If you’d like to get involved, contact them at 304-345-7121.

After the jump you’ll see a few more shots of the dancing, along with a sampling of the art on display.

“The Bump” was in evidence, during the night:

Here are several more shots of the crowded dance floor: Many of the artists gathered in the art auction room: Some of the neat work by Eric Pardue: Not being picky, they even let some of my work into the show:

One last sepia shot of the dancers: 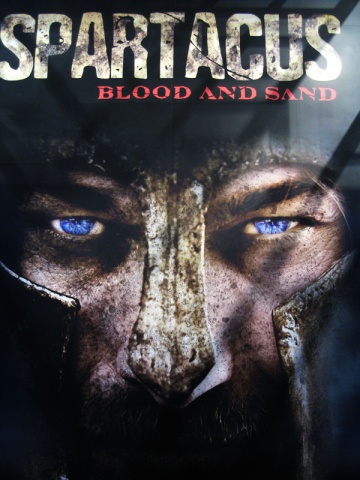 “Spartacus: Blood And Sand,” the new original series on Starz, is a rare treat–a show bad enough to provide amusement, but not so bad that you want to avoid it. This is TV to mock, great fun, but not great art. Pop some popcorn and get ready to do your best “MST3K” act for this show.

Inspired by HBO’s excellent “Rome” and the visually stunning movie, “300,” “Spartacus” tells the familiar tale of the imprisoned slave who becomes a gladiator and eventually leads a rebellion. If you’re a fan of the classy and compelling “Rome,” you are going to be sorely disappointed by “Spartacus.” 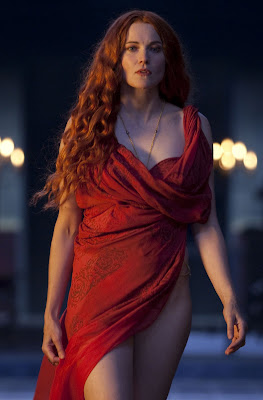 You see, “Spartacus” is produced by the folks who brought us “Hercules” and “Xena” in the 1990s.  And “Spartacus: Blood And Sand” is every bit as campy and cheesy as those series. In fact, Xena herself, Lucy Lawless (right), is on display in this new show, trying hard to channel Polly Walker’s character from “Rome.”

She doesn’t come close, in terms of acting, but she IS very much on display. You see much more of  Lawless than you ever did in “Xena.” In fact, the show ought to be called “Spartacus: Blood And Boobs.” This is basically the campy fun of “Xena” with lots of extra nudity and strong language, and blood.

Oh yes, the blood. It should almost be billed as a co-star.  In this post “300” production, the blood is spilled by the bucket, and it has more screen presence than many of the actors.

Viewers are treated to low-budgeted green-screen fight scenes that freeze the action so that the comically gigantic blood sprays can fly out of even the smallest impact and fill the screen. I was waiting for a character to get a paper cut, so that the blood would spray out across the screen in slow-motion. The fight scenes in “Spartacus: Blood And Sand” remind me of the Monty Python sketch about Sam Peckinpah’s “Garden Club.”

The blood and boobs in “Spartacus” are sure to inspire drinking games, and if you participate in one, please do not try to drive afterward.  You’ll be lucky to stand upright, let along drive. If female nudity is not your idea of fun, there’s plenty of bare male buttocks on display, too.

Aside from the gratuitous, but hilarious, sex and violence, “Spartacus:Blood And Sand” is essentially cheap melodrama. It’s brainless fun. If you enjoy professional wrestling, but feel that there simply isn’t enough gore or bare-breasted women, then this is the show for you. It’s a guilty pleasure, best watched in the company of clever friends who can crack good jokes on it.

Rock Show Of The Week: The Concept And Mother Nang

Two of the most popular bands that we’ve had on Radio Free Charleston are teaming up for a killer double bill Friday night at The Empty Glass. The Concept will kick things off with their primo punk at 10 PM. After that, Mother Nang takes over with their unique brand of thinking man’s alternative funk.

If you want to see and hear a sample of both bands, check out this post from Pop Cult, which includes four complete episodes of RFC featuring the band.  The cover charge will be five bucks, give or take a couple.

Cool Comic Of The Week: The Torch Marvel Comic’s Human Torch has a bit of a convoluted history. There are actually two or three of them. The original Golden Age Human Torch was not actually human. He was an android, created by scientist Phineas Horton, and was deactivated after WWII after fighting alongside Captain America and against (and later with) The Sub-Mariner . The Human Torch who is in The Fantastic Four is a totally different character.  At one point the android body of the original Human Torch was supposed to have been recycled into a character called The Vision, but I think they’ve gone back and changed that.

Which is why the original Golden Age Human Torch can be revived in this new 8-issue series written by Alex Ross and Mike Carey, with art by Patrick Berkenkotter and Ross. Even with the daunting task of sorting out which character has which body, who’s been reanimated after being killed and who has which super-powers now, Ross and Carey are crafting a compelling story. In it, the original Torch has been placed under mind-control by The Mad Thinker, and is being peddled as a weapon of mass destruction.

I can’t make heads or tales of the current Marvel Universe continuity, but The Torch manages to keep from getting bogged down in that mess and tells a tale that takes disparate elements and assembles them in a way that recalls the long-gone glory days of Marvel.

Look for classic episodes of Radio Free Charleston with some tenuous connection to Valentine’s Day on Sunday, plus some kind of nifty thing to look at in Monday Morning Art. Through the week you might also get a dose of cool toy news, if you’re good.