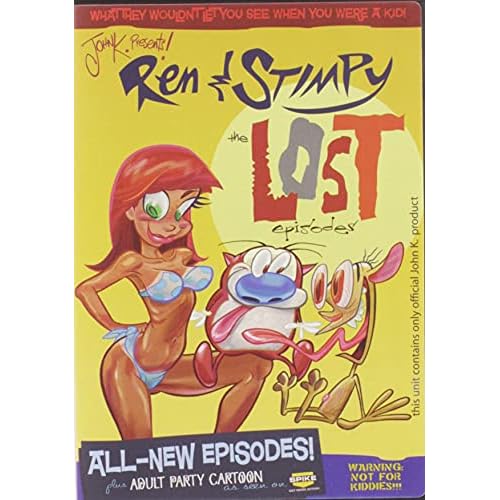 Next month (July 18, to be exact), the lost episodes of Ren and Stimpy finally hit DVD! These are the “Adult Party Cartoon” shows that were produced for Spike TV a few years ago by Ren and Stimpy’s creator, John Kricfalusi, who had been reunited with his perverted cat and dog after being booted off the series by Nickelodeon back in 1992. Spike only aired a few of these new Ren and Stimpy cartoons before the winds changed and they decided to drop their animation programming. This DVD will contain all the uncensored, adult-oriented, Ren and Stimpy cartoons that John K. produced. That includes three full episodes that have never aired. These have only been screened at events where John K. has spoken, although there are lots of clips circulating on the internet. The three un-aired shows are “Naked Beach Frenzy,” “Altruists,” and “Stimpy’s Pregnant.”

You can see a nearly five-minute trailer for “Stimpy’s Pregnant” here, at John K’s blog.

Here’s a clip from “Naked Beach Frenzy,” where Ren has been mistaken for a crab by the extremely hairy lifeguard.

Below are two short clips from “The Altruists.”

We’ve always had a soft spot for Ren and Stimpy. If not for them, we never would have started writing about animation for the Gazette all those years ago. It was nice to see John K. vindicated when he got to go back and revisit his babies in 2003. Now we’ll finally get to see the second half of his triumphant return to the show that launched his career.

“Ren and Stimpy: The Lost Episodes” is going to be one killer DVD that any adult animation fan should rush out and buy. Parents will want to think twice, or even three or four times, before letting children watch this DVD. They contain nudity, profanity, and enough twisted situations to cause a parent to have to explain delicate things long before they expect to. These will be good, dirty fun. If this DVD set sells as well as we expect, Paramount may be knocking on John’s door, asking for more new Ren and Stimpy cartoons.