RFC 88: Who Let All Of This Riff Raff In The Room?

We rushed out a special episode of Radio Free Charleston this week so we could beat the holiday rush. We’ve got great music from The Riff Raff Players and Flare Baroshi, plus we have the long-awaited trailer for Eamon Hardiman’s new movie, “Porkchop,” and some more DEVO-inspired animation from Frank Panucci.

Our host segments were shot at Taylor Books, during a particularly cold and rainy winter night (actually, at the rate we’re going, this show will have gone online less than ten hours after our taping). If you don’t see the show at the top of this post, follow this link. Our first musical performance is “Appalachian Round,” one of the featured songs from “Christmas with the Riff-Raff,” featuring The RiffRaff Players at The Room Upstairs on the funky end of Mercer Street in Princeton, W.Va. Show times are at 7:30 p.m. Fri., Dec. 11 and Sat., Dec. 12; with a 3 p.m. matinee on Sun. Dec. 13, 2009. Admission is $10 at the door. Sweets and treats will be served. The Room Upstairs, one of the coolest listening room spaces in the Mountain State, is at 865 Mercer Street, Princeton, W.Va., about one hour and 45 minutes south of Charleston, W.Va.

The RiffRaff Players feature vocals by Lori McKinney, Kathleen Coffee, Albert Perrone, Douglas Imbrogno and Melissa and Kayla McKinney, with eclectic acoustic and electronic instrumentation by The Captain Lazerblast Band and soundsmithing by Robert Blankenship. The group’s most recent (and debut) performance was a production of the off-Broadway play “Songs for a New World,” staged at the Room Upstairs and as part of the Tamarack Dinner Theater Series.

This video was shot and edited by Douglas, and we wanted to drop it into this week’s show so you could get a taste of this weekend’s performance.

We are also proud to present the trailer for Eamon Hardiman’s latest epic, “Porkchop.” This horror film has just been completed, and we’ll have details on where and when you can see a buy it on DVD as soon as we get them. 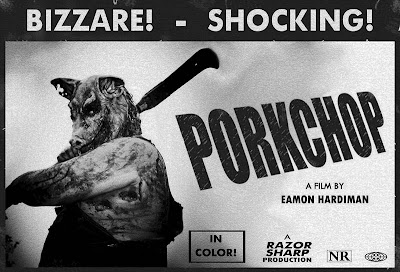 Our animation is more DEVO Energy Dome inspired fun from Frank Panucci. There’s a lot more of this coming, so get used to it. We wrap up the show with an encore of Flare Baroshi’s “Vampire Mafia.” This is the “Black and White Version,” which hasn’t been on RFC yet. Flare’s debut on our Halloween show was one of the most talked-about numbers on the show this year, and we wanted to show you this alternate version. Rumor has it there may be a third version of this video in the works.

That’s it for this show. Come back next week for our big Christmas show, with music from Molly Means, from the show, “Mary,” and some exciting musical collaborations–Todd Burge makes his debut on RFC teamed with Joseph Hale, while our resident diva, Melanie Larch, will be backed up by Diablo Blues Band–all doing special holiday music.