RFC: “Flaming Skull Shirt” with The Amazing Delores and Much More! The brand-spanking-new episode of Radio Free Charleston, “Flaming Skull Shirt,” is online for your viewing pleasure now! This episode features a video by the late, legendary darling of Dunbar, The Amazing Delores.  You’ll also get to see a performance by Joe Slack, our first second-generation guest on RFC.  Over the end credits we play one of the most-requested songs from the old radio incarnation of RFC.  We have a very special movie trailer, and animation from Frank Panucci’s movie, “Reperkussionz.”   The host segments were shot at the Charleston Town Center, just two days ago.

The host shoot was noisy but uneventful.  It was as though Delores herself was looking down when I did the show intro, since you can see the lights coming on behind me as I say her name. Actually, it was because we were shooting right at noon, just as the stores were opening, but it’s nice to pretend. We shot in a few recognizable places around the Town Center Mall, and we may go back later and do another show from there.  Heck, we might even ask permission next time.

Taking things out of order, we have to talk about The Amazing Delores.  Delores Boyd was the high-priestess of West Virginia Psychotronica.  People imagined that, had she married Hazil Adkins, that Jesco White would have been their child.   The definitive portrait of Delores was crafted by Jacob Young as part of the 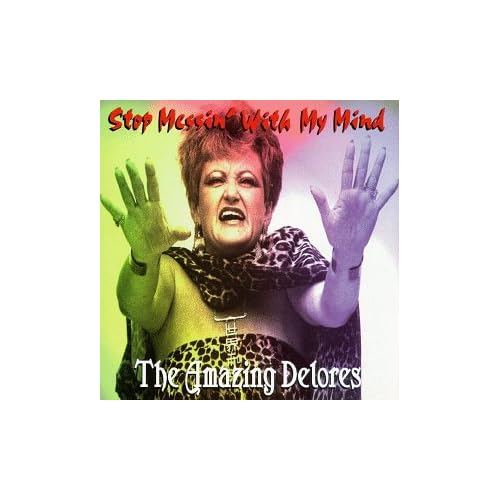 “Different Drummer” series made for WVPB years ago.  You can order it here, or you can go watch it on the big screen at the Labelle Theater in October.  I’ll be posting more details on that screening as the date approaches.  You can also order Delores’ CD, produced by Michael Lipton, from CD Baby or Amazon.

My thanks go out to Michael for permission to use this song on the show, and to WVSU Professor of Film Danny Boyd for providing me with the video.  Danny directed the video for “Love Magic,” which was included in the aforementioned documentary.  Stan Lynch co-wrote the tune with Delores and Michael, but we SNAFU’d the credits in the show because of confusion over the credits on the original video.  Steve Gilliland did not co-write the song, but he does appear in the video as the mystery man. Danny and Steve also made a film back in the 1980s called “Coaldust/Fairydust,” which was shown on Night Flight on the USA Network.  I’m not saying that “Coaldust/Fairydust” has anything to do with the deeply moving and sensitive movie trailer that we feature in this episode of RFC, but if it did, then think how cool it would be that we feature some of the same footage on Radio Free Charleston that aired on our major source of inspiration, Night Flight.

Joe Slack is the son of Tony Slack, who appeared on episodes one, six, and twenty-two of RFC as a member of The No Pants Players.  Joe is part of the talented mob of young musicians who sprung forth from Riverside High.  You can see him performing his song, “Picture Perfect.”  I played with the color for this video.

My brother, Frank Panucci, has been toiling away at his feature film “Reperkussionz” for a couple of years now.  He shot the live-action footage, starring IWA East Coast’s Mad Man Pondo and Desiree Ferrari back in April 2005, and is creating all the sets, spaceships, aliens, and doo-hickeys with CGI.  I managed to pry loose some test animation from Frank by trading him some Hot Wheels Batmobiles.

As we roll the end credits for this episode, you’ll hear the song “The Trax” by Three Bodies.  Three Bodies were Kris Cormandy, Brian Lucas and Brian Young, and you may remember seeing them in vintage video form on episode three of RFC. “The Trax” was one of the two most-requested songs on the old radio version of RFC, and I recently remastered this version of it and wanted to share it with you. We play part of it over the end credits, but you can hear the whole song here.

For the video, we recycled some of the FestivAll footage from RFC Big Shot Melanie Larch’s much-enjoyed Gazz TV report from last June.  It works really well with the song, and it was already on the hard drive.

That’s the tale of RFC number 25.  Check back here at PopCult for more details on upcoming shows and live appearances by the artists who have contributed to Radio Free Charleston.