The Walking Dead Toys For 2015 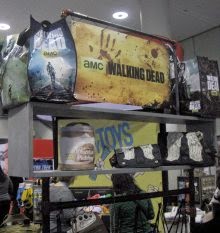 Today we’re going to look at all the cool toys and other items based on The Walking Dead, currently the most-watched series on television. We’re going to bring you news and photos of really cool upcoming Walking Dead products from four different companies. Photos are by Rudy Panucci, Melanie Larch and the toy makers.

First up, we have McFarlane Toys, the folks who hold the master toy license for The Walking Dead. They produce toys based on both the comic book and the television show and they have a really exciting line-up of new products due out later this year.

In about a month, collectors can expect to see a six inch action figure of Daryl with his chopper. Shortly after that, series 7 of The Walking Dead television action figures will hit stores, including figures of Carl, Michonne, Gareth, and the Flood Walker. Series 8 is due late in the year with figures of Eugene, Morgan, Rick, Dale and Bob. 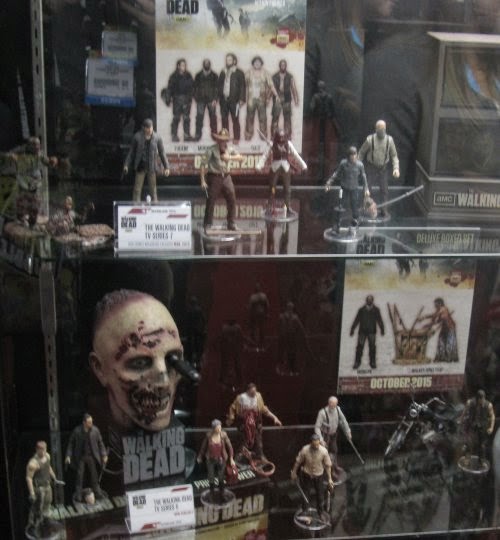 Six-inch action figures and a few other goodies 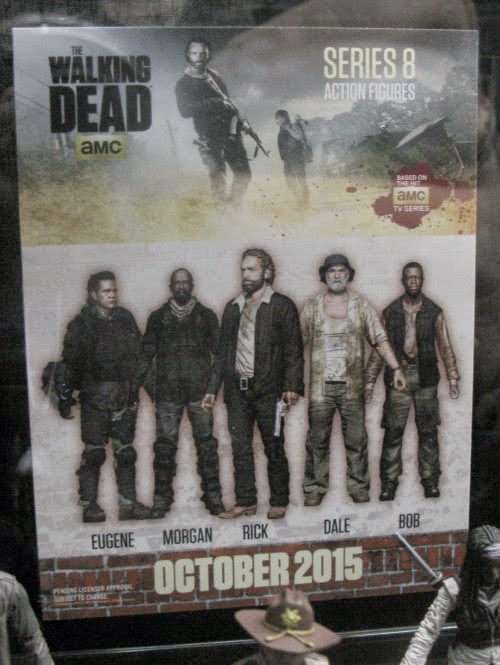 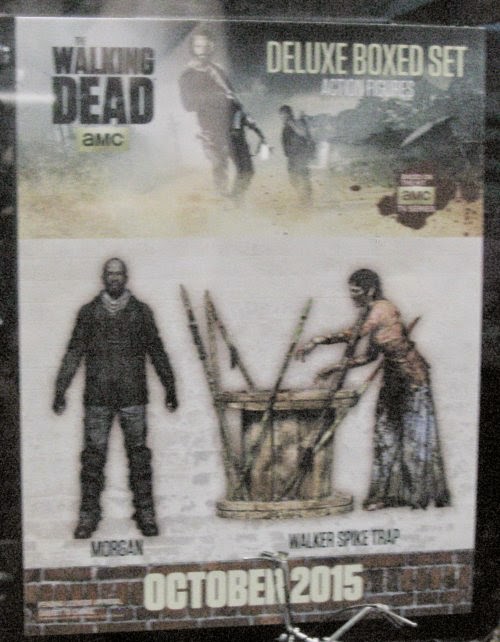 We were treated to a last minute surprise–the unpainted prototype for this fall’s ten inch deluxe Michonne action figure, just arrived on day three of Toy Fair & photos of this figure have not shown up much online yet. This is a very impressive figure. 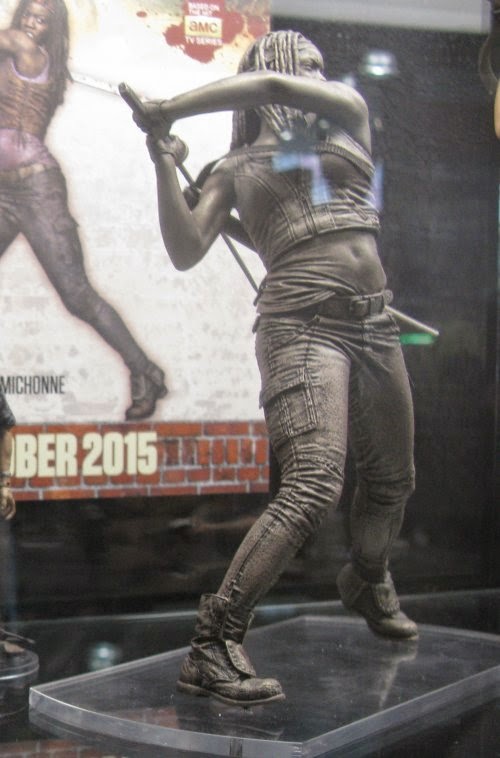 The unpainted prototype of the 10″ Michonne 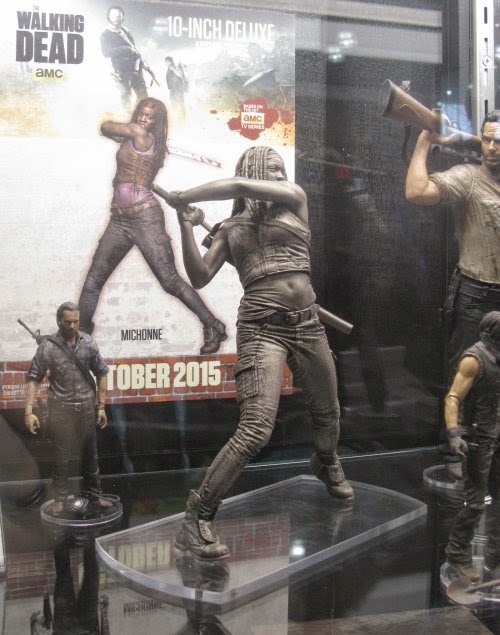 Also very impressive are the upcoming building sets based on The Walking Dead TV show. All of the sets that were previously exclusive to Toys R Us will be available everywhere by June. Following that, will be Series 2 of the blind bag figures and a Walker Trap set. Later in the year, even more incredibly detailed building/diorama sets will appear depicting the Boiler Room, the Catwalk, a pair of upstairs and downstairs prison cells, Dale’s RV, the Woodbury Assault Vehicle, the Hospital, and a new five-figure pack featuring Daryl and Merle Dixon with three walkers. 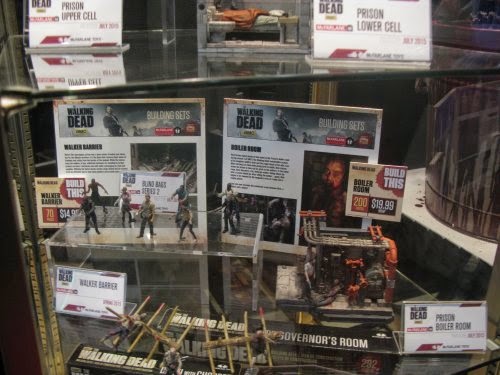 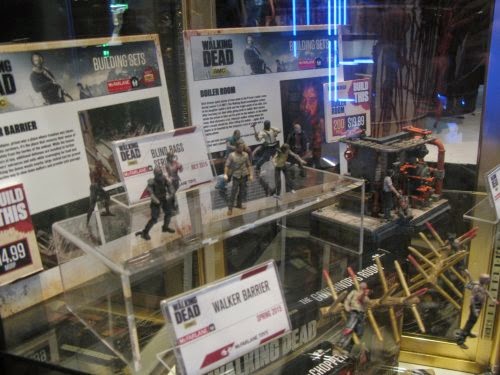 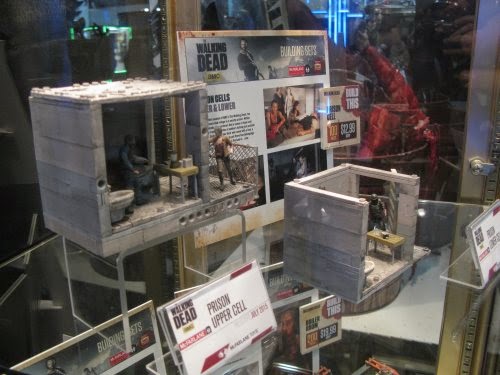 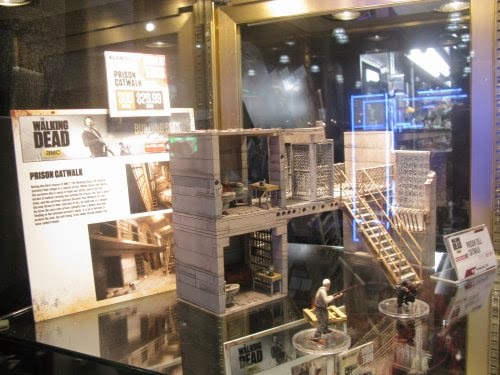 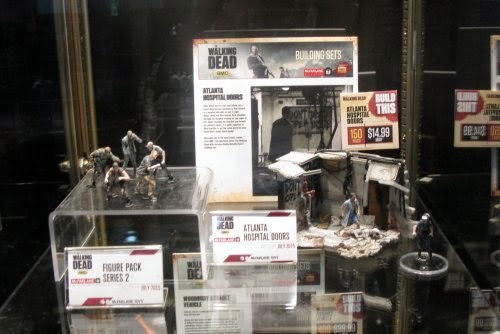 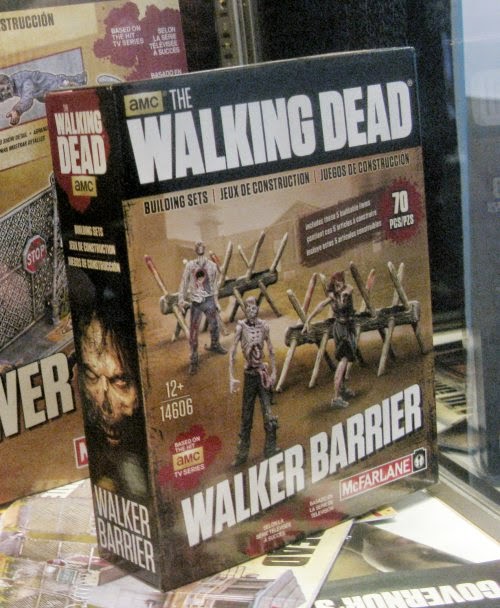 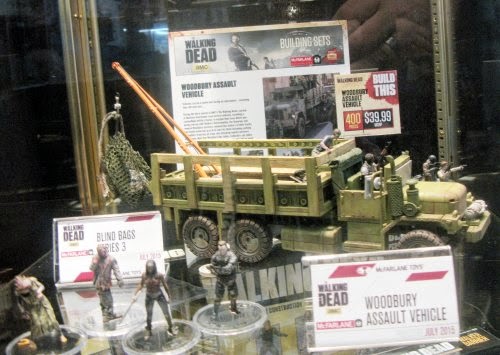 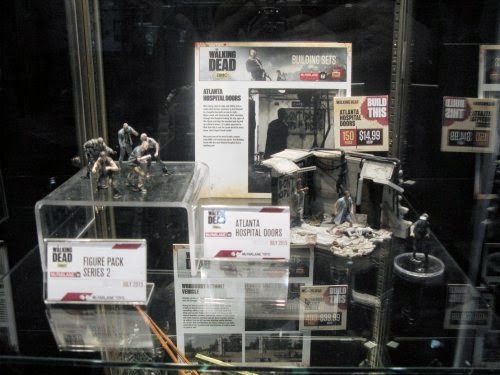 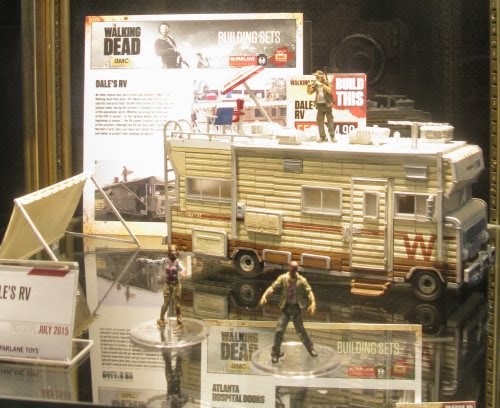 Walking Dead comic fans can also expect a new wave of Mini-Mates from Diamond Select Toys. Coming to Toys“R”Us stores nationwide and Toysrus.com in March, the new assortment features characters from the “All Out War” story arc featured in issues #115-126 of The Walking Dead, based on artwork by series artist Charlie Adlard. In the arc, Rick’s group teams up with other communities against the powerful Saviors group. Minimates based on the Walking Dead comic book

The assortment features four two-packs, each pairing a human character with a zombie. The human line-up includes: Alexandria Rick Grimes – Living in the walled city of Alexandria with his fellow survivors, Rick leads the community to war against the Saviors. Rick comes packaged with a Balding Zombie. Negan – Negan is the leader of the saviors, and enforces their draconian laws. He is deceptively polite, but has the potential for terrible violence. Negan comes with a gate-guarding Thug Zombie and his barbed-wire baseball bat Lucille. Ezekiel – Ezekiel is the leader of the Kingdom, and plays the role of king with gusto. When Rick votes to stand against the Saviors, Ezekiel agrees. Ezekiel comes with a Mauled Zombie. Available exclusively at Toys“R”Us beginning in March. Andrea – One of the few remaining members of Rick’s original group, Andrea has become an excellent shot, and is Alexandria’s resident zombie sniper. Andrea comes with the Prom Zombie, who was the winner of a poll conducted by the official The Walking Dead magazine to be the next zombie Minimate. Available exclusively at Toys“R”Us beginning in March. 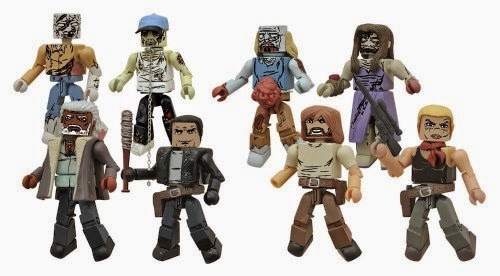 The Coop will be offering a wide assortment of really cool adult and child apparel items based on The Walking Dead, as well as pet clothes and one of our favorite things we saw during Toy Fair, a zippered thermal bag which is a near perfect replica of the 112 ounce can of pudding that Carl ate back in one episode of Season 4. 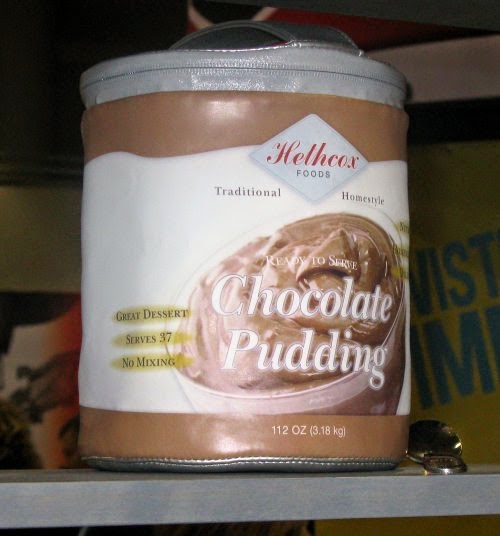 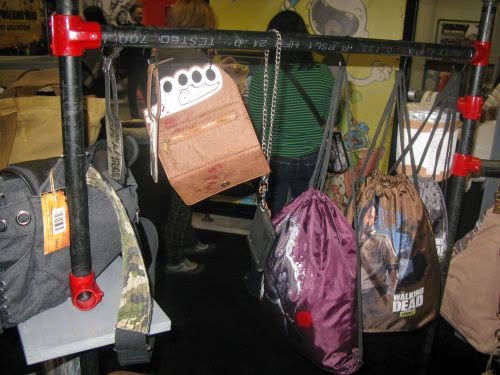 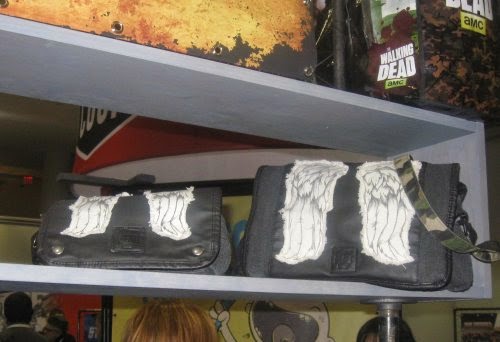 This line includes a variety of bags for carrying what you might need in the event of a walker outbreak. All of them are made of durable materials and made to look worn as they would in a post-apocalyptic world. A partial list: Daryl Wings Messenger Bag (MSRP $89.95), Michonne’s Katana Sling Bag (MSRP $59.95) and Rick’s Sheriff Duffel (MSRP $79.95). Accessories include wallets and luggage tags. The pet line is made up of collars and leashes, toys (The Governor Chew Toy MSRP $14.95) and t-shirts (“Walker Bait” MSRP $19.95).

Funko will soon offer up series three of their Mystery Mini Pop figures of The Walking Dead. 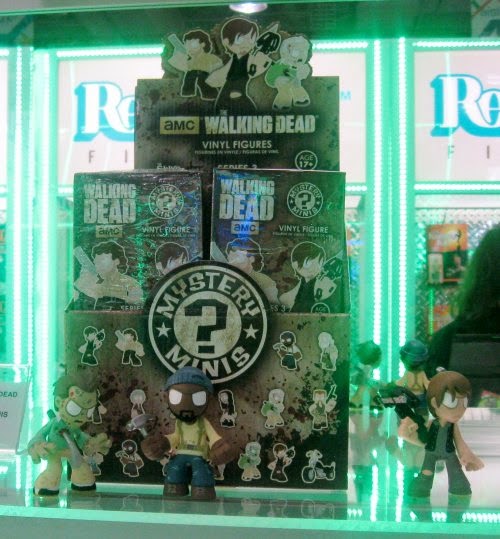 Next up, let’s look at three The Walking Dead “Vinyl Idolz” figures from Vinyl Sugar, sculpted in a stylized cartoon form by the British “Evil Corp.” 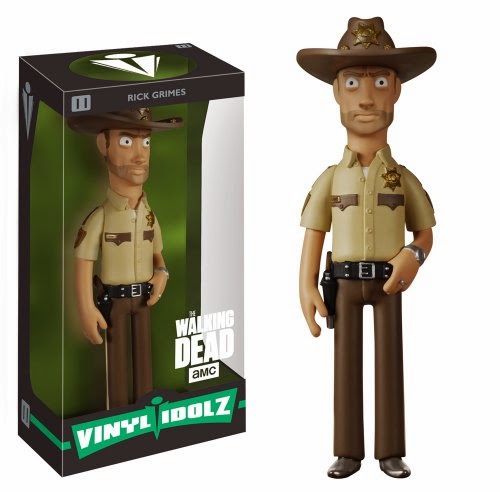 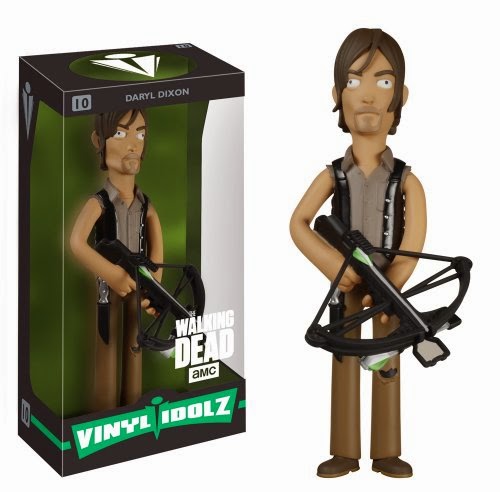 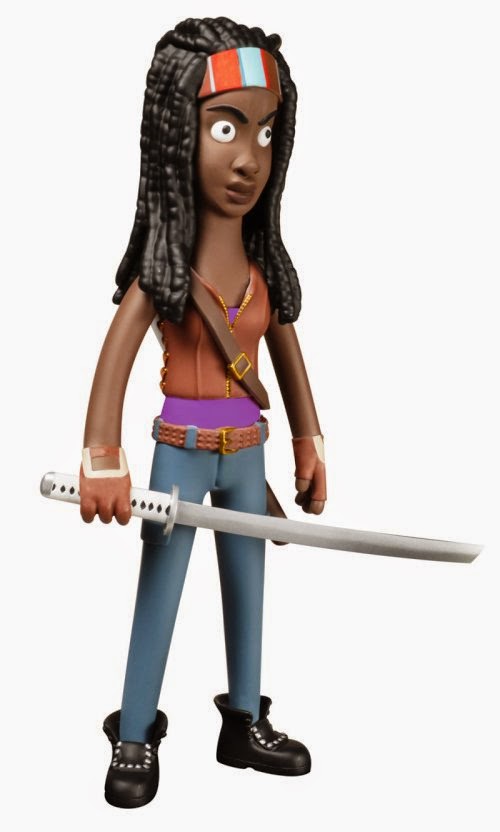 We leave you with the cool Walker figure that McFarlane Toys has designed to go with the Blu Ray set of Season Four. 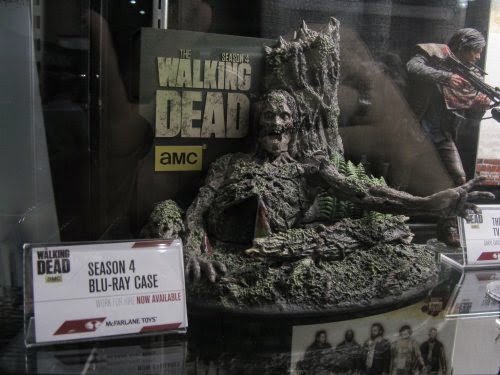