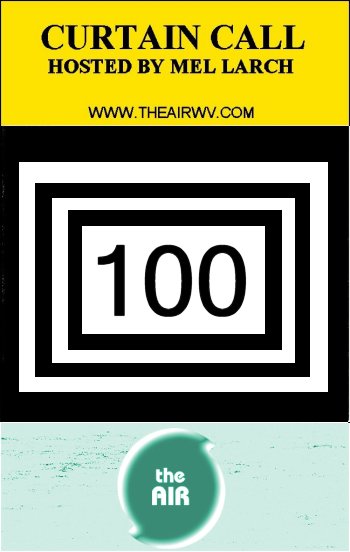 It’s Milestone Time Wednesday afternoon The AIR brings you a very special brand-new episode of  Curtain Call!  You can tune in at the website, or or you could just stay on this page, and  listen to the convenient embedded radio player lurking over in the right-hand column of this blog.

At 3 PM on Curtain Call, Mel Larch celebrtes both the fifth anniversary of Curtain Call on The AIR, as well as the 100th episode of her showcase of the best of musical theatre. To mark this special occasion, Mel is going to bring you a sampling of the best of each decade of the last century, with the 2000s getting a bonus song and an opening number that dates back to 1904!

You will hear songs composed by George Gershwin, Irving Berlin, Rodgers & Hammerstein, Andrew Lloyd Webber, Stephen Schwartz, Lin Manuel Miranda and more, and the singers include Ella Fitzgerald, Elaine Page, Bernadette Peters, Joel Grey, Nathan Lane and more.  Mel didn’t go with the Original Cast recordings for every track, opting for a mix of original performancs, revival casts and interpretations from the world’s greatest singers. Mel chose one song to represent each decade in which it debuted.

This is not supposed to be a definitive list of the absolute best, but rather a sampling of the cream of the crop of the many entertaining shows that have brought joy to millions over the last hundred years.

It was a challenge trying to cram over a hundred years of musical theatre into one hour, but Mel pulled it off. She does plan to go back and revisit each decade in future editions of Curtain Call. For now, check out this playlist: