Cool Thing Of The Week: SHAZAM! 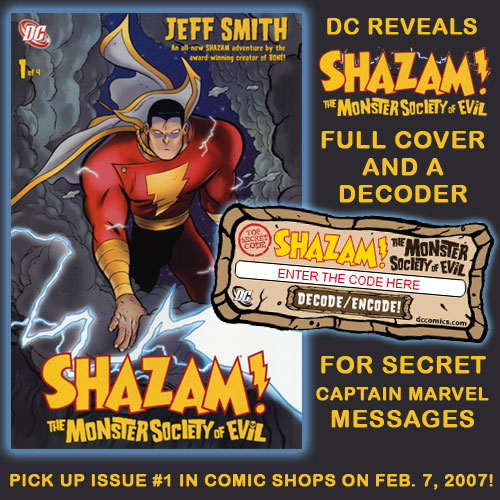 If you’re a fan of the Original Captain Marvel, known by his magic word “Shazam” to most folks, then this is the best of times and the worst of times. We will ignore the god-awful “grim and gritty” re-imagining of the Shazam family of characters currently being inflicted by my least-favorite comic book writer, Judd Winnick (of MTV’s “The Real World.” He was the guy that made you like Puck in season three). Aside from that abomination, there are very cool things afoot with my favorite super-hero, The Big Red Cheese.

Jeff Smith, the cartoonist behind the amazing “Bone” comic books, is producing a four-issue mini-series that takes the Shazam characters back to their roots and re-tells a classic adventure in “Shazam: The Monster Society Of Evil.” This series restores the sense of wonder and light-hearted adventure that was the hallmark of the Captain Marvel stories of the 1940s, when he starred in the best-selling comic book of all time, with sales of six million copies every three weeks. The series even has a secret message in each issue that has to be decoded at the DC Comics Website.

Smith is updating the Captain Marvel story, with Billy Batson, the child who utters the magic word “Shazam” in order to become Captain Marvel, aged at about eight years old. We get to see the beginnings of the character, and his “Marvel Family” sidekicks, and we get a fresh take on the Monster Society Of Evil, which was an epic serial that ran for 25 chapters over two years from 1942 to 1944. This is good stuff. Smith’s style is cartoony, but serves the story well, much like the artwork of Captain Marvel’s main artist, C.C. Beck.
The first issue of “Shazam: The Monster Society Of Evil” went on sale a few weeks ago. Issue two is due out next week.

Aside from this very cool mini-series, DC Direct has announced 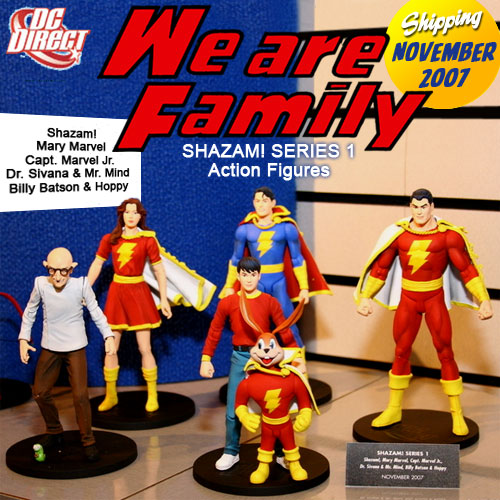 If you are an obsessive fan of the Original Marvel Family and the entire Shazam mythos, then you need to zip on over to the Marvel Family Web, which is where I swiped the images for this post. Bookmark that site, and you’ll keep up to date with all the info on Captain Marvel. Plus you can poke around the site for tons of great historical data on the days when comic books were fun.