Get Your Comedy here! There is a lot happening in Charleston’s Comedy scene over the next couple of weeks. We’ll catch you up to date today and help you plan how to spend your comedy dollars.

Bargainier is the founder of the Original Black Jews of Japan comedy troupe. He’s been tearing up the comedy scenes in New York City and all along the east coast. The Connecticut native’s style runs comfortably on the edge of conventional and alternative comedy. He is described mostly as what can be called “planned carelessness,” Although he is seen as being morbid or crude sometimes,Brian always manages to pull a 180 and find the humor in topics that sometimes seem untouchable. In 2012 he released his first cd “Grilled Cheese and Orgies” and recently released his first full length album: “Kinda Ready to Die”

Jerry Morgan has been performing all over the east coast at a variety of stages and venues for years. His style has been described as, “..smart, heady… like a mixing anxiety, observation and self deprecation into a blender; introspection in story form.” He performs at and co-promotes a monthly comedy series in New Haven, CT called Fistful of Jokes.

Admission is a mere ten bucks, and the comedy cavalcade begins at 10 PM at The Empty Glass. 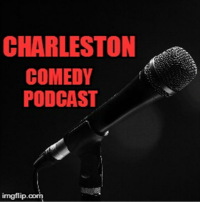 Something I haven’t touched on yet here in PopCult is that Charleston has a Comedy Podcast. Brandon Lowe and Sam Canterbury host a weekly one-hour look at the local comedy scene featuring recaps of shows, plugs of upcoming shows and events and interviews with local and national stand-up comedians. They also do a bunch of funny crap.

The Charleston Comedy Podcast is podcasticated every Wednesday night at 10 PM, with all episodes archived, so you can listen later when you’re supposed to be working. Follow this LINK, it don’t cost nothing.

Tonight you can tune in to The Charleston Comedy Podcast and listen to Lee Hale talk about next week’s No Pants Players benefit show at the Walker Theater at The Clay Center. Here’s a promo video they made…

The No Pants Players say they are gladly performing a benefit show for The Michael J. Fox Foundation and Parkinson’s Research Saturday, October 18. The truth is that they are scared to death. They have been asked by the organizers to do as many jokes in poor taste about the disease as possible, but they fear offending the audience. Making matters more dire is that, to make sure that they do plenty of jokes about Parkinson’s, a sniper, himself suffering from Parkinson’s, will be in the rear of the auditorium, ready to pick off any troupe member who doesn’t crack enough jokes about the disease.

The chances of said sniper actually hitting anyone are slim, but the troupe is still worried about coming up with material that is in absolutely horrible, nasty, mean-spirited and vile taste, without crossing the line. Actually, I made up the bit about the sniper, but I’m trying to lead by example here.

Y9u can join the troupe for a night of interactive improv comedy. This will be a “PG-13” performance. Your favorite alcoholic beverages will be provided by Embassy Suites. Tickets are $25 for adults, and $20 for children of irresponsible parents. They can be ordered in advance, or purchased at the door before the show, which begins at 7 PM.