Go On A Knickerbocker Holiday On Curtain Call 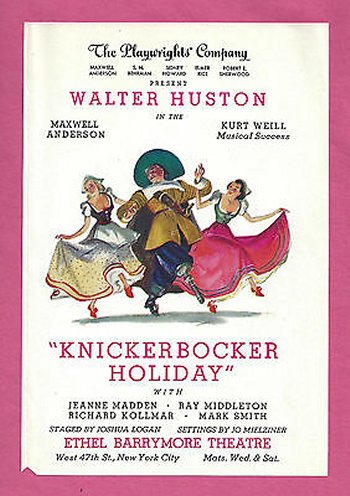 Last week she looked at the future of Musical Theatre, on Wednesday afternoon Mel Larch returns on  The AIR to brings you a brand-new episode of  Curtain Call that looks at the past.  You can tune in at the website, or or you could just stay on this page, and  listen to the convenient embedded radio player lurking over in the right-hand column of this blog.

At 3 PM on Curtain Call, Mel Larch opens the show with ELO frontman Jeff Lynne, aided by George Harrison, no less, and his rendition of the standard, “September Song.”

Today’s new episode of Curtain Call  brings you a rare radio broadcast of a shortened version of the musical, starring the original Broadway production cast, including Walter Huston, Richard Kollmar, Jeanne Madden, and Ray Middleton Walter Huston is the legendary stage actor, as well as the father of John Huston, and grandfather of Angelica Houston.

The musical itself is a wrong-headed political allegory about FDR’s New Deal, disguised as a romantic comedy. Most of the politcal commentary has been trimmed out of this shortened presentation, but it certainly isn’t missed. The songs remain, and they are particularly wonderful.

Knickerbocker Holiday is a curious and historicially important show that is largely forgotten today, save for the lovely “September Song.”