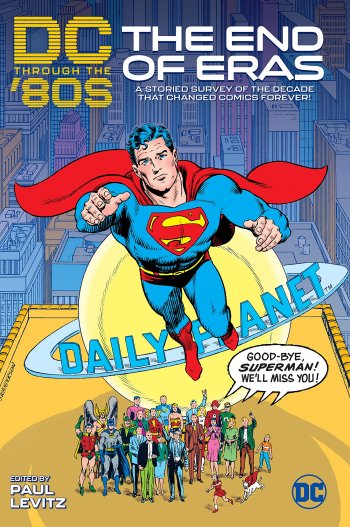 DC Through the 80s: The End of Eras is a pretty wild collection of comics, accompanied by some terrific essays. This expansive and eclectic collection of stories published by DC, mainly in the first half of the 1980s, reveals a level of quality and variety that was not fully appreciated at the time.

Most of this collection pre-dates the publication of Watchmen and The Dark Knight Returns, which most folks point to as the turning point where DC Comics pulled far ahead of Marvel in terms of quality and innovation. The stories here prove that DC, under the direction of Jeanette Khan and Paul Levitz, was already nurturing a creative environment where seasoned veteran comics creators found creative a resurgence while collaborating with then-newcomers.

The 1980s was an exciting time to be a comic book reader. This book shows why that was the case. Comics were migrating from the mainstream distribution channels, and were becoming a hobby item, sold primarily in specialty shops. This decade was sort of the last gasp of true variety in comic books, as most comic shops catered almost exclusively to superhero fans and hobby speculators.

As with any 500-plus page book devoted to DC Comics, we get stories featuring Superman, Batman and Wonder Woman. However, except for the often-reprinted “Whatever Happened to the Man of Tomorrow” Superman stories, we are treated to some unjustly overlooked gems, even starring DC’s “Trinity.” 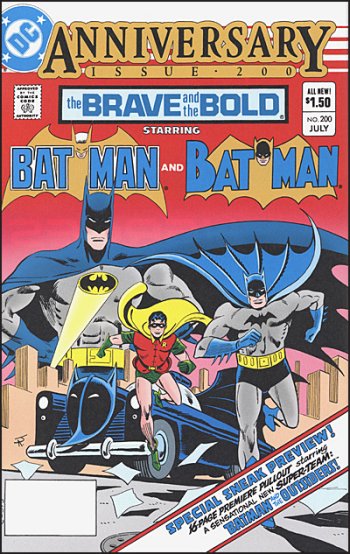 The first third of this book is devoted to DC’s superheroes, which have always been the mainstay of the publisher. However the stories selected by Levitz are superb. Batman is represented by a 40-page story from the final issue of The Brave and the Bold. This story is written by Mike Barr and features gorgeious art by Dave Gibbons, who would go on to draw Watchmen a few years later.

That is the first story in the book and it sets the tone as we are treated to a two-part Wonder Woman story with terrific art by the much-maligned Don Heck, as well as some great stories starring The Flash, Firestorm and Superman. The superhero stories are filled with great villains and alternate-universe shenanigans, and we are treated to art by Carmine Infanto, Walt Simonson, Denys Cown and Rich Buckler along the way.

With appropriate space given to the supeheroes, DC Through the 80s: The End of Eras moves on with a section devoted to “Mystery” stories (the word “horror” was still forbidden by the Comics Code Authority at this point). This section is a blast, as we are treated to artwork by some true legends of comics like Irwin Hasen, Lee Elias, Infantino, Tom Sutton, Nester Redondo, Gil Kane and Johnny Craig, illustrating stories from a mix of veteran writers and newcomers,

The next section of the book covers their war titles, and we are treated to Robert Kanigher and Joe Kubert on a Sgt. Rock story, plus Sam Glanzman drawing an adventure of The Haunted Tank. We also get to see a couple of short early pieces by first-wave Kubert School graduates Steve Bissette and Rick Veitch. One minor complain here is that, while some of the war and mystery stories may have been published in the 80s, a few were sitting around in inventory for a while. A war story with brilliant art by Ric Estrada is included here, but it sports a very large “’72” next to the artist’s signature.

The “Other Worlds” section includes a story from Mike Grell’s Warlord, plus a couple of short sci-fi tales and a two-part Jonah Hex epic. This again demonstrates the variety of different comics that DC published in the 80s. 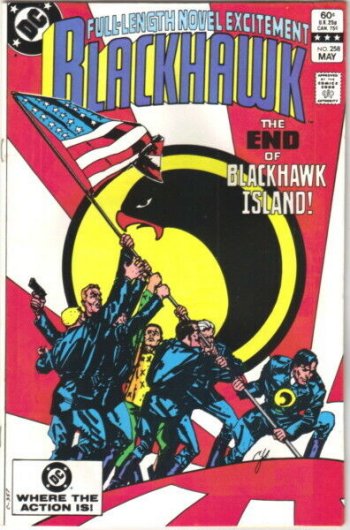 After that, we get a section of the book titled “Endings and Beginnings,” and it includes a seemingly random assortment of really great comic book stories. We get an issue of Super Friends guest-starring Plastic Man; one issue of the Mark Evanier/Dan Speigle run of Blackhawk,  a series which really should be collected into a single deluxe volume (I think this is the first time any of these stories have been reprinted); a Slam Bradley short from Detective Comics #500; a few weeks of The Worlds Greatest Superheroes comic strip; and in what makes this truly random, a He-Man and the Masters of the Universe story, drawn by legendary Superman artist, Curt Swan.

Rounding out that section of the book, and making things even more random, we are presented with some of the glorious artwork of Jose Luis Garcia-Lopez, from DC’s consumer products style guide.

I think that maybe less than half of the stories in this book have ever been reprinted before, and this adds to the specialness of this collection.

These are great stories, but the real attraction is the text bonus that immediately follows them.

DC has finally officially published Alan Moore’s 1987 20-plus page proposal for a company-wide DC Comics crossover story that was to be called “Twilight of the Superheroes.”

DC paid Moore a kill fee, but passed on developing the project, and shortly thereafter Alan Moore split from DC Comics over a myriad of reasons.

Rather than attempt to condense it myself, I’m going to share the Wikipedia synopsis with you:

The framing device of the story involves future versions of John Constantine and Rip Hunter travelling to the present day, ostensibly to prevent a catastrophe involving the superheroes of their time. The hook through which the series would connect with other titles is the attempts of the two time travelers to recruit others into their quest to alter the future through warning them of upcoming events. Individual books in the DC Universe could tie into the crossover or not, as their creators wished, by having Hunter or Constantine show up and warn the stars of the book of some event. The main narrative of the series involves Constantine relating the story of what has happened in the future to his present-day self over drinks in a bar.

The series was set in the future where the world is ruled by superheroic dynasties, including the House of Steel (presided over by Superman and his wife Wonder Woman) and the House of Thunder (consisting of the Marvel Family) as well as houses built around the Teen Titans, the Justice League, and an alliance of supervillains. The Houses of Steel and Thunder are about to unite through the marriage of Superboy and Mary Marvel, with their combined power potentially threatening the status quo, and several characters attempt to stop it. One group of opponents is a shadowy cabal of non-powered heroes led by Batman. Another involves an alien alliance of the Green Lantern Corps, Martians, and Thanagarians. Constantine’s narrative of the future ends with a massive battle between the various factions, resulting in the death of most of the superpowered characters.

A side story would show a decaying superhero ghetto where decrepit versions of old heroes live. In the final part of the present time framing device it would be revealed that Hunter and Constantine had traveled back in time not to prevent the future they came from, but to ensure its coming true. The final battle depicted in the book resulted in humanity being freed from the control of superheroes, a prospect that Hunter and Constantine supported.

The series would have restored the DC Multiverse, which had been eliminated in the 1985 mini-series Crisis on Infinite Earths. However, the series would also have been a significantly darker take on DC characters than had previously been published, with many of the future versions of the heroes depicted as murderers, perverts and tyrants. A central plot element of the series, for example, involves the Question investigating the bondage-themed murder of someone who turns out to be Billy Batson. The series was never commissioned, but copies of Moore’s detailed notes have appeared on the Internet and in print, despite the efforts of DC, which considers the proposal its property.

A number of story elements from Twilight of the Superheroes have made their way into works later published by DC Comics. The 1991 crossover Armageddon 2001, for example, involves a messenger from the future traveling to the present to convince superheroes to avoid a disastrous future. A dark future vision of superheroes as irresponsible was shown in the series Kingdom Come. DC later introduced a more flexible approach to continuity, similar to what Moore proposed, with the idea of Hypertime. Finally, the miniseries Infinite Crisis, along with the series 52, reintroduced the multiverse to DC comics. Other changes to individual characters that appear in the proposal, such as the Teen Titan Cyborg becoming almost wholly mechanical, were introduced as well.

That’s some pretty heavy and dark stuff, and from the looks of DC’s Future State concept, which is currently being published, they are still strip-mining Moore’s proposal from 34 years ago.

For many fans, the publication of Twilight of the Superheroes is worth the price of the book. I have to wonder if its inclusion here influenced some of Levitz’s story choices.

An added bonus in this collection, and something that has been sorely lacking in many recent DC Comics collections, are new essays recounting these remarkable times from participants Elliot S! Maggin, J.M. DeMatteis, Andy Kubert, Jack C. Harris, and Paul Kupperberg.

This is the first of three comprehensive volumes exploring DC in the 1980s, compiled by former DC Comics president and veteran comics writer Paul Levitz. While it’s hard to imagine how he’ll top this effort in the subsequent volumes, I have to say I’m intrigued and looking forward to the prospect. The next volume is due out in May, and is devoted the DC’s more “experimental” projects.

You should be able to order DC Through the 80s: The End of Eras from any bookseller, or get it at a discount from Amazon.