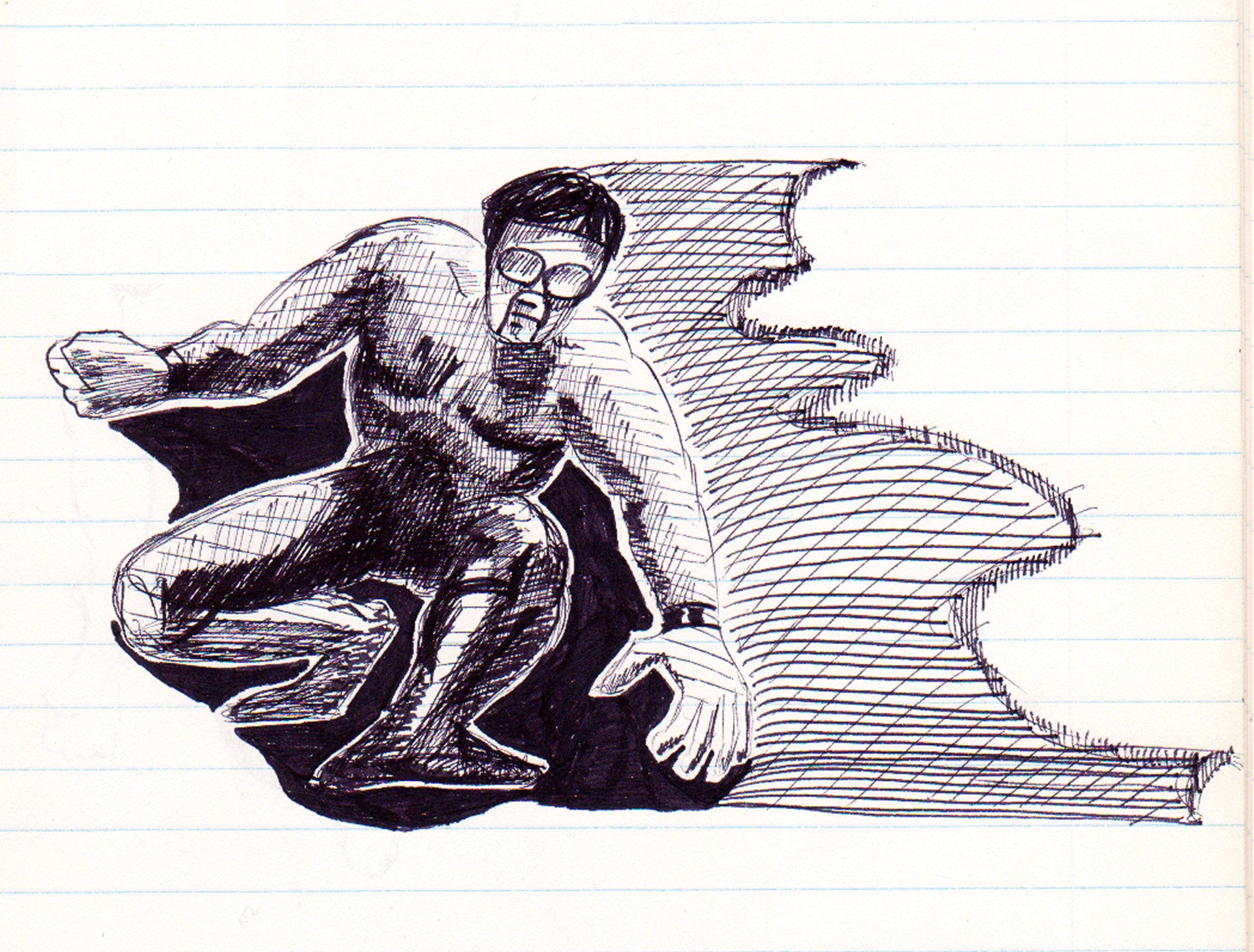 So I sort of cheated this week for my Inktober entry here in Monday Morning Art. It is indeed an ink drawing, but…it’s one I did forty years ago in a college notebook. This was how I took notes. I’d draw while the professor was talking, then when I’d look at the drawing later, I’d remember everything I heard while I was drawing it.

This is a doodle of a crouching science fiction or superhero guy. I drew it while taking a Criminology course, which I ended up dropping because it bored the living crap out of me. On this day, we were hearing about the psychology of pursuit, which isn’t nearly as interesting a topic as it sounds.

This was done in ball-point pen on notebook paper. I’m still not great at drawing feet. As for why I went back that far to grab an ink drawing…I had deadlines all last week and I wanted to be lazy this weekend. So excuse the heck out of me.

If you want to see it a bit bigger for some ungodly reason, just click on it.

Meanwhile, Monday at 2 PM on The AIR, we bring you a new episode of  Psychedelic Shack, followed at 3 PM by a new edition of Herman Linte’s weekly showcase of the Progressive Rock of the past half-century, Prognosis.  You can listen to The AIR at the website, or on the embedded radio player at the top of the right-hand column of this blog.

Nigel Pye has a trippy party with the latest episode of  Psychedelic Shack! It’s an entire hour filled with trippy-ass music from the golden age of Psychedelic Rock as well as some new, mind-expanding gems from the young hipsters.

Psychedelic Shack can be heard every Monday at 2 PM, with replays Tuesday at 9 AM, Wednesday at 10 PM, Friday at 1 PM,  and Saturday at 9 AM. Classic episodes can be heard Sunday at 9 AM as part of our Sunday Haversham Recording Institute collection.

At 3 PM, Herman Linte offers up a new Prognosis, for which he did not provide a playlist. However, he tells me that this episode features people dressing up as Pink Floyd for Halloween. You will hear an entire concert by Brit Floyd, as well as tracks from a new album that collects jazz renditions of Pink Floyd classics.

At 8 PM, stick around for an 11-hour marathon of Mel Larch’s MIRRORBALL, so you can disco dance like crazy.