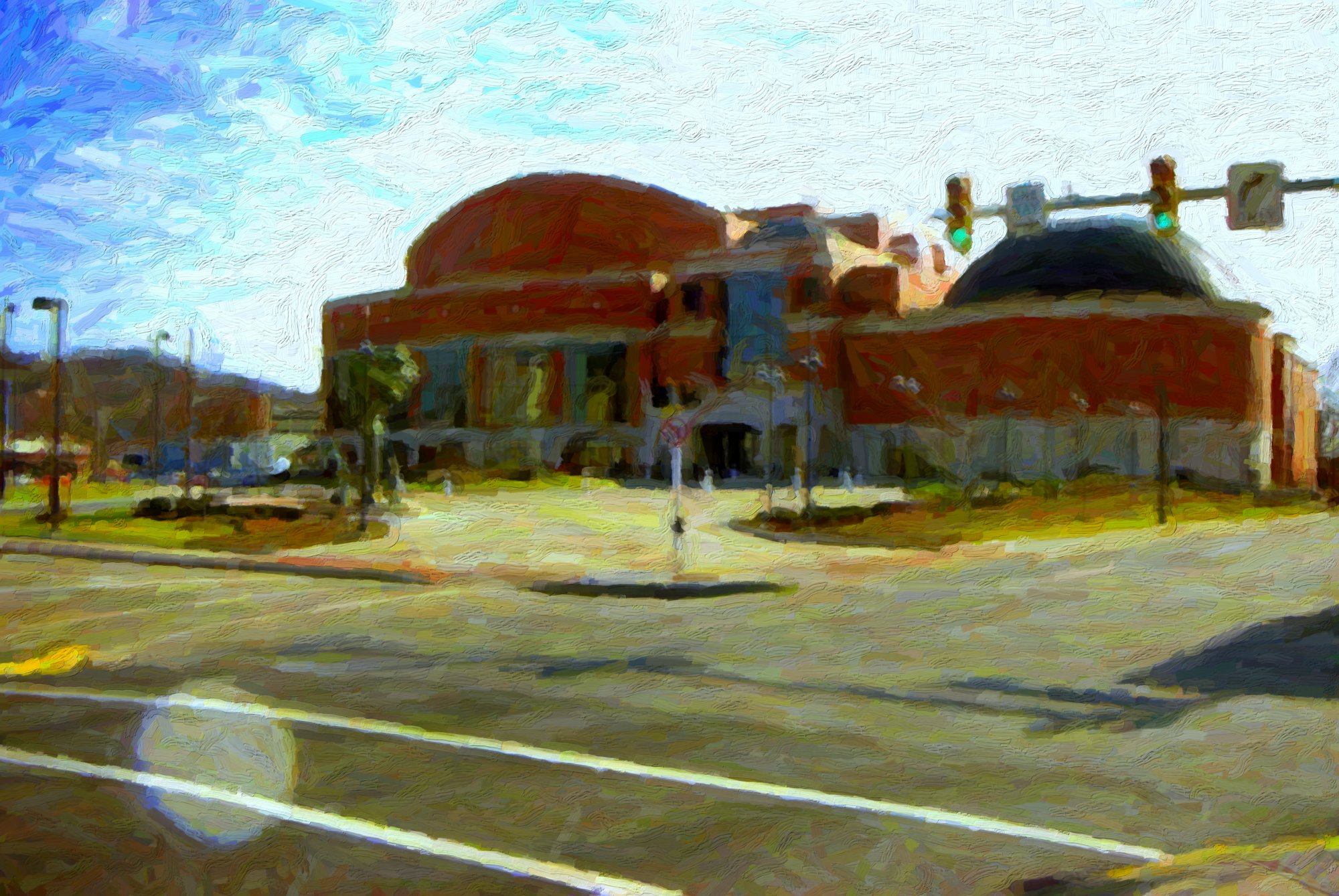 I was poking around in a file folder on the PC that dated back fourteen years. That was four computers ago, I think. And I found some photos I took while walking around Charleston on a nice, sunny day back in 2006. I also found a collection of old custom virtual paintbrushes for my graphics program. I re-installed them, and decided to paint over one of the photos of the Clay Center, back in the days before the controversal Albert Paley “Hallelujah” sculpture was dropped out of an airplane and landed in front of our lovely museum/concert hall.

I had some time to kill, so I painted out all the people standing in the way, and I also painted out the banners hanging on the Planetarium wall, and then I had at the photo with my primitive Impasto brushes.

I probably won’t be using those again. They were a bit squirrely and I have better custom brushes available now. But I did get this image out of it, which should bring a smile to folks who are still mad about Mr. Paley’s work. My appreciation of it hasn’t exactly grown since I critiqued it back in the day, but I don’t fly into a rage every time I see it like Mrs. PopCulteer does. This painting is for those of you who miss the way the Clay Center used to look.

Meanwhile, Monday on The AIR, we are shrinking the Monday Marathon to six hours so that we can return to our original scheduling concept. At first, our big idea was to debut one of our specialty music programs at 3 PM, and then, the next weekday, we’d replay it at 7 AM.  When we started the Monday Marathon this was disrupted, and now we’ve put things back the way they were. So at 7 AM, you will hear a replay of last Friday’s 1982-centric edition of Sydney’s Big Electric Cat. At 9 AM you’ll get six hours of Psychedelic Shack, in advance of tomorrow’s new episode, the first one we’ve managed to pry loose from Nigel Pye since June.

At 3 PM on Prognosis, Herman Linte brings us a new episode of Prognosis, filled mostly with recently-released progressive rock music. Check out the playlist:

That’s followed by a classic Prognosis and an evening of NOISE BRIGADE and Radio Free Charleston. You can hear replays of Prognosis Tuesdays at 7 AM and 8 PM, Wednesdays at 9 AM, Thursday at Noon, and Saturday at 9 AM. But we’ll be tinkering with the schedule over the next few weeks, so don’t get too used to that.