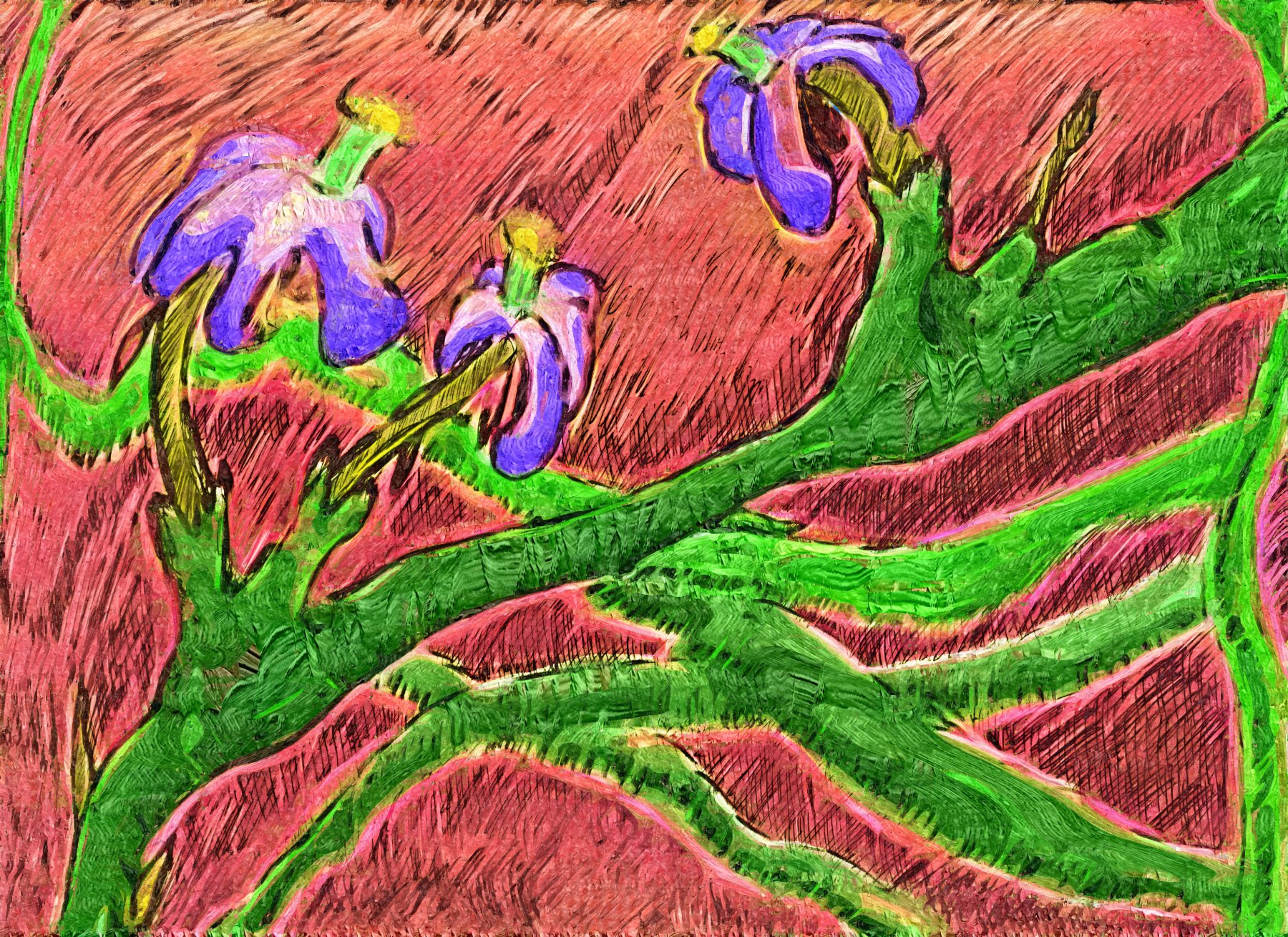 This week I decided to revisit an old piece and try out a new technique. 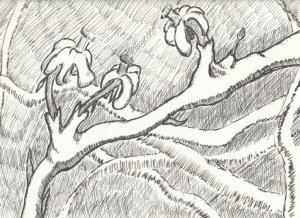 About twelve years ago I did a drawing in my sketchbook while listening to live music at Taylor Books. It was really just a glorified doodle that I wasn’t paying much attention to while I was working on it. This was around the time that Myasthenia Gravis began attacking my fingers, which is why the cross-hatching is so sloppy, as you can see at right. A few days later I painted over it digitally, and used it as an entry in Monday Morning Art.

I found the original scan the other day, and decided to try something new with it. I printed it out on photo paper, and painted in real-world style. I used some thick, gloppy old acrylics and wound up with some pretty wild accidental textures as it reacted with the glossy coating on the paper. The printout was about half the size of the original drawing, and I discovered that, using a small amount of thinner, I could “warp” the image a little.

I don’t know if I consider it a rousing success, but I do think it’s an interesting approach, and it definitely has some potential. The image you see above is a photo because it wasn’t dry enough to stick in the scanner. There’s some minor color correction.

Meanwhile, Monday at 2 PM on The AIR, we bring you a new episode of  Psychedelic Shack, followed at 3 PM by a new edition of Herman Linte’s weekly showcase of the Progressive Rock of the past half-century, Prognosis.  You can listen to The AIR at the website, or on the embedded radio player at the top of the right-hand column of this blog. Neither of our friends from Haversham Recording Institute gave us a full playlist this week. Their shows will probably go on a brief summer hiatus while they are otherwise occupied providing translation services for the Olympic Games.

However, Nigel Pye has informed us that Psychedelic Shack will open with a “really groovy tune” from Jimi Hendrix. Psychedelic Shack can now be heard every Monday at 2 PM, with replays Tuesday at 9 AM, Wednesday at 10 PM, Friday at 1 PM,  and Saturday at 9 AM. Classic episodes can be heard Sunday at 9 AM as part of our Sunday Haversham Recording Institute collection.

At 3 PM, Herman Linte offers up a new Prognosis, which will focus on the criminally-overlooked 1970s Prog band, Patto.  You can hear Prognosis on The AIR Monday at 3 PM, with replays Tuesday at 7 AM, Wednesday at 8 PM, Thursday at Noon, and Saturday at 10 AM. You can hear two classic episodes of the show Sunday at 2 PM.