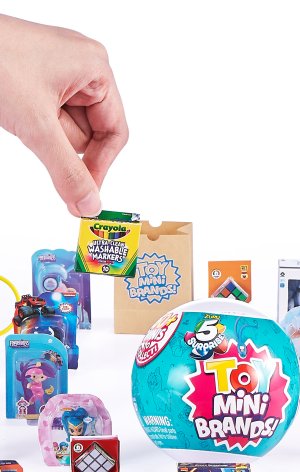 It’s follow-up day for The PopCulteer as we update some previously published posts and tell you about today’s programming on The AIR.

Just minutes after yesterday’s PopCult Toybox about 5 Surprise MIni-Brands was posted, I got the following press release:

LOS ANGELES (October 1, 2020) – The hot miniature collectible trend takes a whole new spin with the introduction of Toy Mini Brands, a range of realistic miniature replicas of classic and contemporary toy brands from award-winning toymaker ZURU. Through a partnership with Nickelodeon/Viacom, Teenage Mutant Ninja Turtles, SpongeBob SquarePants JoJo Siwa are among the company’s nine toy brands that will be miniaturized and hit store shelves across the globe this year. In addition, iconic and popular brands such as Classic Rubik’s, Crayola and Wham-O join the Toy Mini Brands portfolio.

ZURU’s Toy Mini Brands will arrive in North America/USA in November, the UK and Germany in December and rest of Europe in 2021.

“Our product development and licensing teams have worked closely to take some of the most iconic toy brands and shrink them to fit in your hand,” said Aneisha Vieira, Global Brand Director of ZURU. “The mini collectible trend is unwavering and we’re confident Toy Mini Brands will follow suit as one of the most in-demand products of the year. ”

With Toy Mini Brands, unwrap the iconic 5 Surprise capsule and peel back the segments to discover what five mini toys are inside. Each capsule is a surprise unboxing with toy miniatures and toy shop accessories, including shopping basket, cart, bag and shelves, to find. Perfect for kids, kids at heart and collectors of all ages, ZURU TOY Mini Brands will be available at an SRP of $6.99.

In addition, a Toy Mini Brands collector’s case features room for 30 of the most sought after minis and comes with four exclusive minis. The case is available for an SRP of $9.99.

This is pretty cool news. While miniature toys have been sold before with Super Impulse’s “World’s Smallest” line, the amazing level of detail that we’ve seen with 5 Surprise Mini Brands combined with the fact that you’ll get five mini toys in each package for the same price as most “World’s Smallest” toys makes it a much better value.

It looks like they’re not going with a consistent scale here, but most of these seem like they’ll also work for dioramists and customizers. Plus it cracks me up that they’re doing 5 Surprise Toy Mini Brands of their own 5 Surprise toys. It’s a level of meta that you can’t not enjoy.

5 Surprise Toy Mini Brands is something new to look forward to this holiday season. As soon as I get my hands on them, you can expect a review. 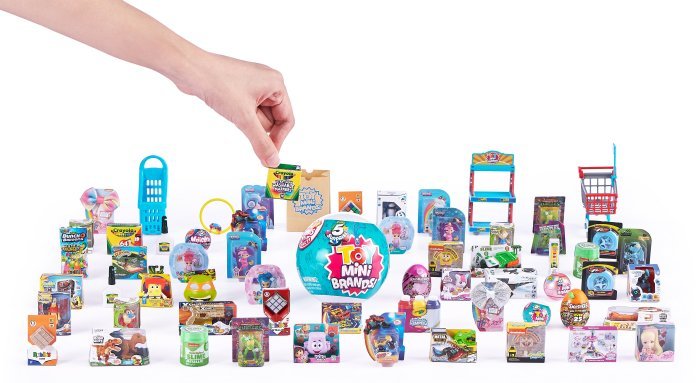 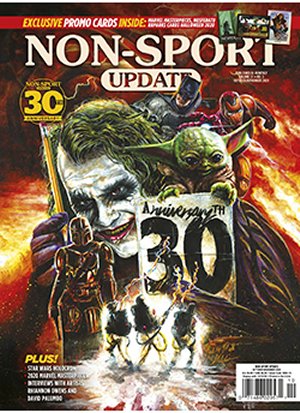 I’ve been writing for Non Sport Update, the definitive guide devoted to non-sport trading cards, since 1997, and in the latest issue, you can read that tidbit and even see a recent photo of your PopCulteer as the magazine celebrates it’s 30th Anniversary, Halloween and new Star Wars and Marvel Comics cards all at once.

Here are the articles in this issue:

Yours truly covered New & Noteworthy this time around, and it’s really cool because all three sets are Kickstarter projects that I’ve supported. It’s been a real kick to be part of the NSU family for 23 years, and counting.

Non Sport Update‘s October/November issue should start showng up on newsstands soon, or you can order it HERE. 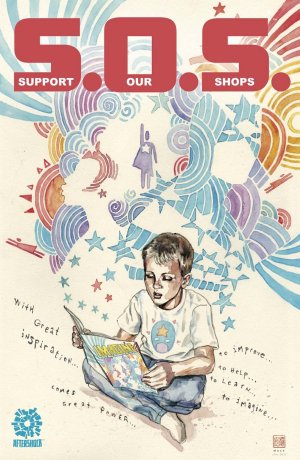 A couple of weeks ago I told you about The Give Comics Hope initiative, which is a series of charity auctions designed to raise money to help comic book stores stay in business. It was Ed Catto who told me about that project, and Ed was also kind enough to send me a copy of a special fundraising comic published back in June that had escaped my notice.

“This benefit book celebrates the central and critical role that comic shops have always played in fostering a love of the medium among fans – many of whom have gone on to become creators in their own right,” AfterShock publisher Joe Pruett said in a statement. “It might be a drop in the bucket, but it’s a hell of a drop in the bucket. These are heartfelt stories, crafted by creators with deep, lasting connections to the comic shops of yesterday, today and, we have no doubt, tomorrow.”

“Speaking and connecting with hundreds of comic shops regarding the challenges they face – as an overall retail channel and as individual and independent business owners – we felt an obligation to give something back, something that was uniquely AfterShock,” added SVP of sales and marketing, Steve Rotterdam. “We’ve always been about creators and their visions, so this was an easy decision.”

Twenty copies per storefront were delivered free of charge to Diamond Comic Distributors’ 200 top-ranked AfterShock accounts, with the next 300 ranked accounts receiving 10 free copies. Copies arrived with shipments of product with a June 24 on-sale date. If your local store got these in, you may still be able to find them on sale. Any store not included in these 500 places that is looking for copies is invited to contact AfterShock.

“S.O.S. is our small way of saying ’thank you’ to all of the wonderful stores that have supported AfterShock since the beginning,” editor-in-chief Mike Marts said about the project in his own statement. “Now it’s our turn to give back.”

S.O.S. is a absolute treat, a valentine to the best of what comic book shops meant to hardcore fans who finally found a place to enjoy their hobby in a welcoming atmosphere, and a reminder of why comic book shops are worth saving. In particular, Jerry Ordway’s story really pushed my nostalgia buttons and reminded me what it was like the first time I walked into Comic Kingdom back in 1976. This was how folks who lived outside the mainstream found acceptance back in the days before the internet.

Support Our Shops can be ordered online, but in the spirit of the project, if you’re interested, you ought to mask up visit your local comic book shop first. 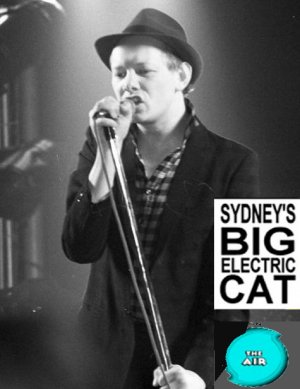 Friday at 3 PM on a new episode of Sydney’s Big Electric Cat, the legendary London Underground DJ, Syndey Fileen,  presents New Wave era live recordings of the post-punk sophisticate, Joe Jackson. You can hear this show and more Friday on The AIR website, or just click on this embedded radio player…

Born David Ian Jackson, and taking his stage name from the American comic strip, Peanut’s “Joe Cool,” Jackson was originally cnsidered a prototypical New Wave artist, alongside the likes of Elvis Costello and Graham Parker. However, Jackson veered off into a different direction, first with his fourth album, Joe Jackson’s Jumpin’ Jive, which is considered an early spark in the Swing Revival, and later with his Night and Day album, which combined New Wave instrumentation with musical inspiration derived from Cole Porter and Duke Ellington.

This episode of Big Electric Cat presents live recordings of Joe Jackson and his band from 1980 to 1986.

As a live performer, Jackson had few equals, and his inventiveness is on display as he drastically re-arranged his first New Wave hit, “Is She Really Going Out With Him?” every time he toured. You will hear four versions of that song in this two hour mixtape-style program, with no rendition sounding a thing like the others.

Sydney’s Big Electric Cat is produced at Haversham Recording Institute in London, and can be heard every Friday at 3 PM, with replays Saturday afternoon, Monday at 7 AM, Wednesday at 8 PM and Thursday at Noon, exclusively on The AIR. You can also hear select episodes of Sydney’s Big Electric Cat as part of the overnight Haversham Recording Institute marathon that starts every Monday at 11 PM.

And that is it for this week’s PopCulteer. As always, check back for fresh content every day, including all our regular features.