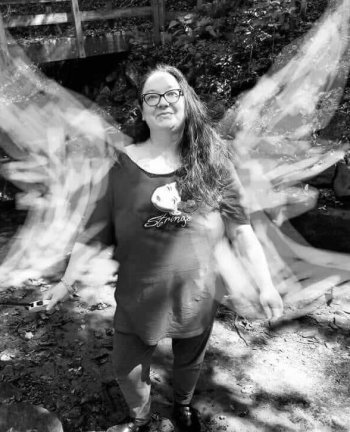 A week ago today, my friend Emily died of COVID-19.

I absolutely hate writing that. I’ve put off writing about losing Emily because I don’t want it to be real.

Emily was my Myasthenia Gravis “coach,” and I have mentioned her many times here in PopCult when talking about my own mild case of this serious disease that made Emily’s life very tough since 2005, when she was diagnosed. I first met Emily at a 2008 benefit concert to help raise money for her after she had to retire due to MG. For several weeks I donated proceeds from my old Monday Morning Art Cafepress Store to Emily, which unfortunately didn’t amount to much.

My heart goes out to her husband, Jeff, whom I have known since he was born. His father was our mailman, and my earliest memory is of his father asking to come in our house to watch coverage of President Kennedy’s assassination. This was several years before Jeff was born.

Myasthenia Gravis is a particularly insidious chronic disease because it’s an auto-immune disorder that attacks the membranes that transmit nerve signals to your muscles. The most effective treatment is to suppress your immune system, which leaves you vulnerable to virus and infection. Emily never resented the fact that my case was so mild while hers was so serious. It’s a nasty thing to have, no matter how badly it hits you.

During a pandemic like the one we’re in, it can be deadly.

There is a Go Fund Me page set up to help Jeff through this nightmarish time. If you knew Emily and her enthusiastic love of live music and of Jeff, please consider making a donation in her memory.

I really hate writing obituaries, and this one has hit me particularly hard, so I’m going to swipe liberally from her obit at Keller’s Funeral Home for the rest of this post…

Emily was a 1991 graduate of Hurricane High School, and attended Marshall University and West Virginia University, graduating with a degree in Textiles Design and Merchandising. This degree allowed her to pursue her passion for snowboarding while living in Portland, Oregon, where she worked for Columbian Sportswear, as well as a handful of snowboard companies, all while enjoying her favorite extreme spot on Oregon’s Mt. Hood some two-hundred plus days a year.

She returned home to West Virginia in 2003, where she worked for the Real Estate Guide before landing an internet advertising sales position at Charleston Newspapers, where she was involved in the launching of The Gazz, the paper’s all new art’s and entertainment section.

Emily fell ill with the autoimmune neuromuscular disease, Myasthenia Gravis, in the fall of 2005. The condition severely limited her physical activity, but never dampened her overwhelming sense of spirit. She reunited with Jeff, an old junior high school sweetheart, in December 2005. They married on the Oregon coast in August 2006.

Emily’s light had a shine that affected everyone she met. Her larger than life personality, coupled with her fierce determination to battle myasthenia gravis was inspirational to her many friends in the local West Virginia music scene and beyond. She is remembered for her craftiness and creativity, and was known to knit and sew all types of things from blankets to scrubbies.

Emily was a lover of live music, especially jam band, reggae, hip hop, and bluegrass. She was truly one of the last mountain dancers and when feeling good enough she could flat foot a hole through the floor. Emily was also an a cappella singer of old mountain ballads, performing in recent years at local open mics and folk festivals, sometimes accompanied by her husband on banjo as they preformed as the Westmoreland Ramblers.

Emily will be remembered as a kind soul with a warrior spirit. She fought hard until the end and passed only after Jeff arrived to tell her she could go home to Heaven.

A memorial service and a celebration of Emily’s life will be held at a later date.

I am trying to get through this without resorting to anger over the mishandling of this pandemic by our current national and local leaders. We’ve lost so many good people due to the messed-up priorities of those in charge, but this is not the place to lay blame. This is about remembering Emily and the many lives she touched. She will leave a void in many people’s lives.

That is this week’s PopCulteer. Check back every day for fresh content and our regular features, and come back later Friday for the playlist for a new episode of Mel Larch’s MIRRORBALL.