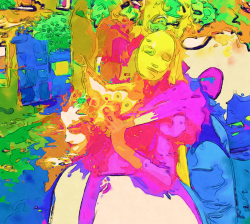 Last year, we skipped FestivAll. Competing events out of town, combined with genuine fatigue and a FestivAll that was smooshed in with West Virginia’s 150th birthday made it easy for us to decide to take a year off from covering the time when Charleston becomes a work of art. We will be back this year. In fact, we’re gearing up to record the Art Parade (weather permitting) as I write this. To help get you in the FestivAll mood, we’re going to go back to our last epic FestivAll two-parter from 2012.

We are also treated to an Effects Makeup demonstration by Rob “RJ” Haddy, our local star FX makeup artist in the first show.  Much of the first show is devoted to the FestivAll Art Parade, while it concludes with scenes of The East End Main Street Streetworks Art Auction and Celebration, and auctioneer Ted Brightwell. The second show focuses on the second weekend of FestivAll.