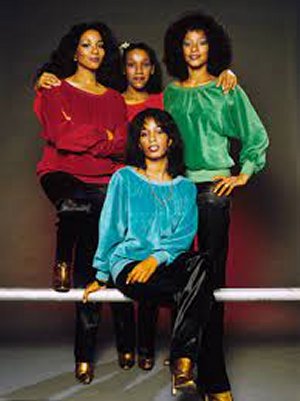 Friday afternoon we offer up a new episode of MIRRORBALL and encore a recent Sydney’s Big Electric Cat, plus in the evening we replay our Curtain Call Stephen Sondheim marathon. The AIR is PopCult‘s sister radio station. You can hear these shows on The AIR website, or just click on the embedded player at the top right column of this blog.

At 2 PM, Mel Larch uncorks a new MIRRORBALL! The AIR’s showcase of classic Disco music presents a solid hour of Sister Sledge.  The four real-life sisters, really named Sledge, came out of Philadelphia, Pennsylvania, and in 1979 took over the Disco world–with a little creative help from the band CHIC.  We present a retrospective of their Disco-era hits It’s a great show, and I’m just going to drop the playlist right here…

You can hear MIRRORBALL every Friday at 2 PM, with replays Saturday at  8 PM, Sunday at 11 PM, Tuesday at 1 PM and Wednesday at 7 PM, exclusively on The AIR.  This week’s new MIRRORBALL will kick off our weekly Disco Marathon, which runs Saturday night from 8 PM until Midnight.

At 3 PM, Sydney Fileen graces us with an encore of an episode of Sydney’s Big Electric Cat devoted to Swindon’s finest, the legendary New Wave band, XTC.

Sydney’s Big Electric Cat is produced at Haversham Recording Institute in London, and can be heard every Friday at 3 PM, with replays Saturday afternoon, Monday at 7 AM, Tuesday at 8 PM, Wednesday at Noon and Thursday at 10 AM, exclusively on The AIR.

At 8 PM Friday, we once again bring you, courtesy of  Curtain Call, Mel Larch’s Musical Theatre showcase, by popular demand,  an encore of this week’s marathon of episodes of the show devoted to Stephen Sondheim, who passed away last Friday at the age of 91. The marathon is preceded by an emotional intro from Mel, and over the course of the six hours, you will hear songs from all of Sondheim’s most famous shows. You can read the details HERE, and this encore will also include a tribute to frequent Sondheim collaborator, Hal Prince, at the end.