Spirits Right In Your Face on RFC 202

The 2014 Radio Free Charleston Halloween Special is here, and you can see it above. This year we decided to go back to our roots and do a more elaborate set of host segments. As you may remember, for the last two years we just recorded stuff at ShockaCon and used it for our Halloween programs (you can see those shows HERE).

While those made for great Halloween episodes, they were also a bit of an easy out for us. We just had to point our cameras and record the cool stuff, then sit on it a month before we brought it to you. This year we didn’t want to make you wait for our ShockaCon coverage, and we wanted to do something a little more special. Although we do bring you a couple of tunes from The Jasons, recorded at West Virginia’s premiere horror/sci fi convention.

This year I had the idea of gathering together some friends and using a Ouija board to summon spirits for the show. I thought it would be hilarious. My wife and co-producer thought differently and chose not to be involved with shooting the host segments. Luckily, I had an ace up my sleeve. 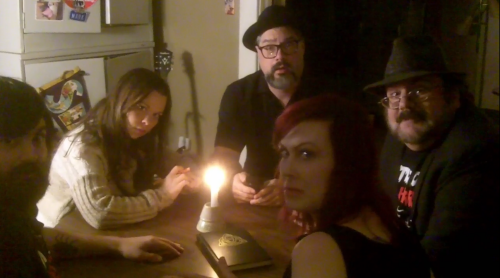 Mic, Penny, Mark, Kitty and Rudy plot to take over the world

Mark Wolfe, in addition to being one of my best friends, has offered his services to Radio Free Charleston many times. He made a cameo appearance on episode 85, one of our previous Halloween specials and he’s the perfect person to call on for this sort of show, since he also created HallowEast and ArtMares.

So I drafted Mark to run camera and direct the host segments. We decided to shoot the host segments in Mark’s office since my original idea of using the Ouija at Spring Hill Cemetary freaked too many people out. Mark is celebrating 20 years of running Mark Wolfe Design, and we’re delighted that he took the time to help us out.

I asked Penny Maple and Kitty Killton to join me in summoning spirits because I enjoy working with them and I know they can deliver on camera. Kitty has been participating in our Halloween shows since before she was Kitty Killton. Penny is the headmistress of The Wayward Girls School of Burlesque and a frequent model for Dr. Sketchy’s Anti-Art School.

The cast, hard at work trying to summon evil

Back at ShockaCon I ran into Mic Bradford and asked him to be part of this because I knew he was into this sort of thing and would make sure that we were as accurate as possible and not do anything too offensive to the spirity folks. Mic’s wife, Melissa joined us and was an invaluable assistance as an extra crew person.

The shoot was great. It was just like a Halloween party, only much shorter and nobody got drunk. Since October is an insanely busy month, I didn’t have time to write the script until the afternoon of the shoot. So I wrote the words around 2 PM, and we wrapped by 7 PM.

Penny, Kitty and Mic all came in after a full day at work, and we banged the show out, almost entirely in one take. We do have a few fun continuity errors, but it’s all in good fun, and nobody got paid, so what do you expect? I cannot express enough my gratitude to my cast and crew for coming together so quickly and flying through the shoot in such a professional manner.

I have to really slather on the thanks to Mark Wolfe for providing the location and running camera, and for using my camera, which is far less sophisticated than what he normally works with. You’ll want to watch the whole show and stick around after the end credits and “Fake Rudy” for an Easter egg with Mark and the cast.

I also need to point out that no Ouija were harmed in the making of this show. We did not actually place planchette to board during the filming of the “spelling” sequences. We shot all the bits where you see us using the board first, which may explain why hardly any of the movements shown correspond to the letters we’re saying out loud. We shot those bits before I handed out the scripts.

Then we took the Ouija board out of the house and locked it in the trunk of my car.

Which then burst into flames.

As you can tell if you’ve watched the show before reading these notes, we don’t actually summon any spirits. We do, however, summon requests for appropriately Halloween-y songs by our musical guests. 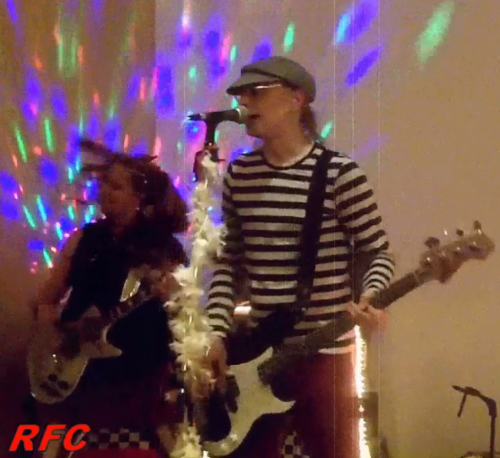 Bambi and Ricky of Radio Cult, recorded at a Marriott in Atlanta

After the “Annoying Halloween Cartoon” by yours truly, we get to hear Radio Cult. Bambi Lynn and Ricky Zero are friends from Atlanta and always provide the music for JoeLanta, the GI Joe Collectors convention held every March, which Mel and I have been honored to be part of for the last couple of years. Radio Cult’s song, “Saturday Midnight Double Feature,” was a natural for our Halloween show, and marks Radio Cult’s debut on RFC, although they’ve popped up in a few PopCult videos before. In this video you will hear Jas Ingram playing the saw, and you may even see Timothy Price running around shooting video on his iPad. This is important for later.

I’m hoping that Radio Cult will trek Northward sometime so that more Charlestonians can get a chance to hear them perform live. They put on an amazing show, mixing originals with classic 1980s rock and pop tunes translated into their incredibly fun style. 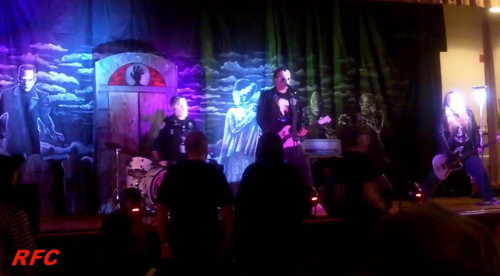 Next up we have The Jasons, recorded at ShockaCon last month. You may notice that the audio is really good on these two songs. That’s because we cheated. I combined elements of the live recording with the studio versions of the song. I would like to say that I did this for artistic integrity and quality, but in truth, the idea of syncing up studio audio with live video of a group who performs wearing hockey masks over their face was simply too much fun to resist.

I told you more about The Jasons on last week’s RFC MINI SHOW. 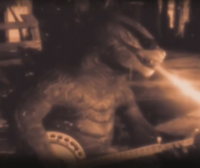 Next up we have an honest-to-God music video by The Possum Kingdom Ramblers. The Possum Kingdom Ramblers are the brainchild of Buddy Finethy, who just happens to be one of the organizers of the aforementioned JoeLanta convention in Atlanta. He assembled a Bluegrass band consisting of master musician and Kaiju expert, Timothy Price, multi-instrumentalist Jas Ingram, and Radio cult mainstays Bambi and Ricky. There mission is to apply their bluegrass style to rock and pop tunes.

Hence the brilliant cover of Blue Oyster Cult’s “Godzilla” in this music video.

I begged and pleaded for them to let us show this video as part of our Halloween special, and they granted me permission. Not only do we get to see a CGI “Big G” himself, we also get some very funny band comedy and a possum riding in a GI Joe Adventure Team Helicopter. 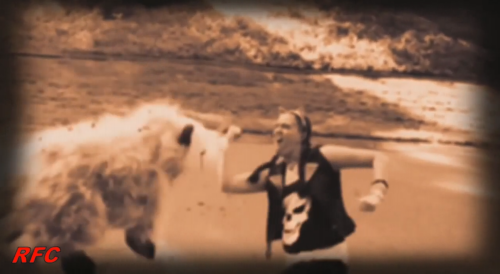 They were just pulling this project together last March when I was at JoeLanta, and I remember the band being a bit modest about dabbling in Bluegrass music when they felt they were lacking in Bluegrass cred. This was a refreshing change from the scene here in West Virginia, where you can’t swing a dead wombat without hitting a Bluegrass musician (who will then write a song about it, like “Some Guy Done Hit Me With A Dead Wombat And Bent My Banjo”). After this version of “Godzilla, I’d say they mastered the style in record time. 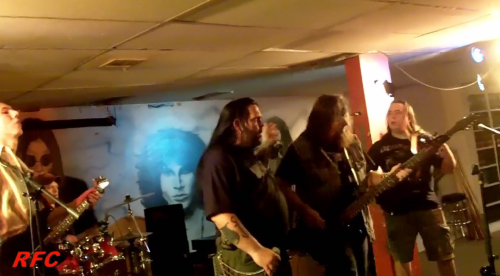 HarraH at The Blue Parrot

Our final musical guest is our old friends, HarraH, who just appeared on episode 200 of our show. The night we recorded their song for our milestone show, We grabbed this quick run-through of their song, “CODA: I Gotta Get Out,” which is based on the comic book, CODA, written and drawn by RFC Big Shot, Frank Panucci back in the 1980s. I thought it was close enough to sci fi for our Halloween show, plus it shows off the new line-up of HarraH, who you can see Halloween Night at The Bowling Alley-Dunbar as part of their big Halloween party, complete with a costume contest, bowling and all sorts of other cool stuff.

Joining HarraH on stage at The Bowling Alley will be Under The Radar, our old buddies from the early days of RFC, reuniting for one night only. Five bucks will get you in the door for the only Halloween party in town that will feature bowling, costumes and songs about comic books, horror movies and John F. Kennedy.

That’s the story of our Halloween Special for this year. Our title shirt comes to us courtesy of the WVSU production of “Little Shop of Horrors,” and we had a lot of folks to thank in our credits this time around. This show was a ton of fun, and I even get to flash my “crazy eyes” in one scene. Check back next week for a non-scary RFC MINI SHOW. 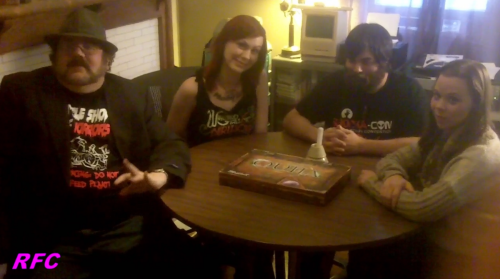