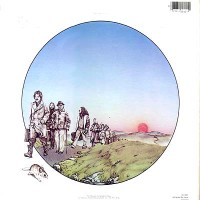 This week we treat you to four music videos that sound like the Beatles, but aren’t. The last one of the batch is a song written by one, though.

Above you see “A Routine Day,” by Klaatu. Klaatu was a Canadian band that is mainly famous for sounding so much like The Fab Four that many people thought that their debut album was actually a secret Bealtes reunion. The above video, in all its Yellow Submarine-inspired glory, was released in 1979 to promote the ‘Sir Army Suit’ album. This music video was part of an incomplete animated special that has never been released called ‘Happy New Year Planet Earth’.

Below you see the video for “I Just Want To Touch You,” which hails from “Deface The Music,” the album where Todd Rundgren decided that he wanted his band, Utopia, to sound as much like The Beatles as possible.

The problem with the Utopia “Deface the Music” album was that The Rutles had already done the Beatles parody/soundalike thing first, and better, as you can see later in this post.

After the jump we have two more, including a clip from The Rutles.

Below, it’s The Beatles’ protoges, Badfinger, with the McCartney-penned “Come and Get It.”