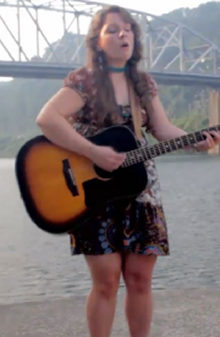 You’ve heard me say it a million times: “Support the local scene.” But what exactly does that mean? Folks, I’m not just talking about music. Charleston has an arts community. We have an overabundance of creative people working in music, art, film, theater, and even in areas that get overlooked, like the culinary arts, and athletic exhibitions.

This week your PopCulteer tells you how you can support the local scene right now!

Tonight, Charleston-area favorite, Kentucky’s Sasha Colette (seen above) and The Mgnolia’s, with Charleston’s own Farnsworth in support, play at The Sound Factory, on Kanawha Boulevard, starting at 10 PM. Admission is a mere five bucks. 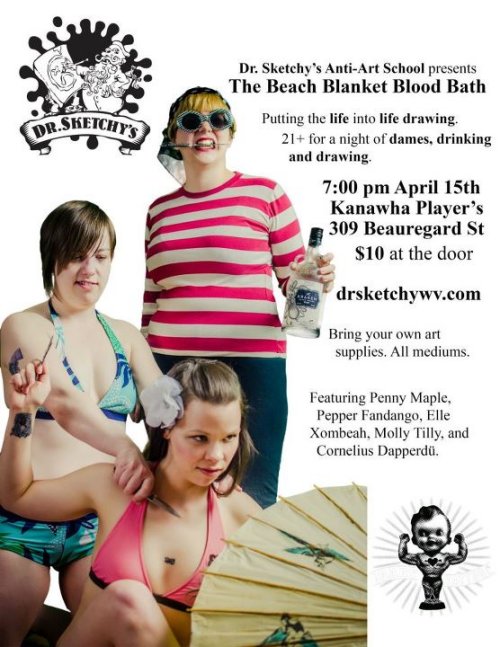 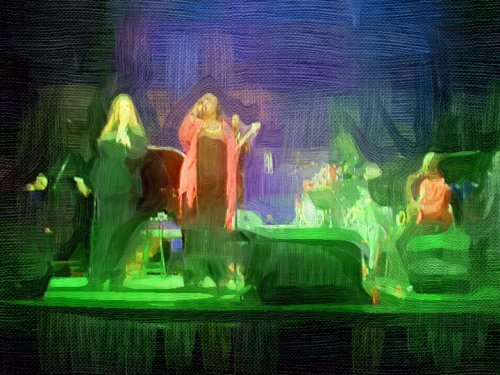 Just a couple of weeks ago, The 2nd Annual WVSU Alumni All-Star Jam took place at the Davis Fine Arts theater at West Virginia State University. You can see rehearsals for the show on RFC 153, and a very nice review popped up at The Pomeroy Blues & Jazz blog. 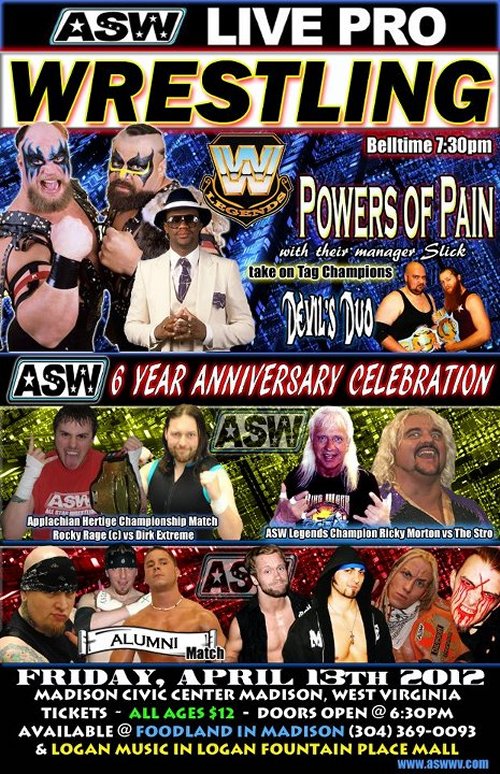 Kanawha Players is holding a Zombie Prom, proof that the undead are not just for Halloween anymore! This fun, “corpse friendly” event will feature Master of Ceremonies Vincent Renfield, from the band, The Renfields, and special guests Jeremy Ambler from The Walking Dead and RJ Haddy from SyFy’s Face Off. The Prom kicks off at 9 PM, but there will be free Zombie Makeovers 8PM-9PM.

Deceased celebrants will also indulge in Dancing, Food, a Brain Eating Contest and more.  You can see Hearses from Cemetery Knights Hearse Club, and there will be prizes for best costume.

Prom photo packages will be available for purchase from Mike Winland Studios.

When it’s all over Zombies are welcome to lurch down the street to The Empty Glass and party with the girls from H.A.R.D Heart Of Appalachia Roller Derby (You must be 21 to enter the bar). Zombies get a discount and only pay $5 to hear music from Hellbound Honky Tonk, Foz Rotten, Charlie Ant Eaterr, and The Tom McGees!

More info and tickets at http://www.brownpapertickets.com/event/239249! 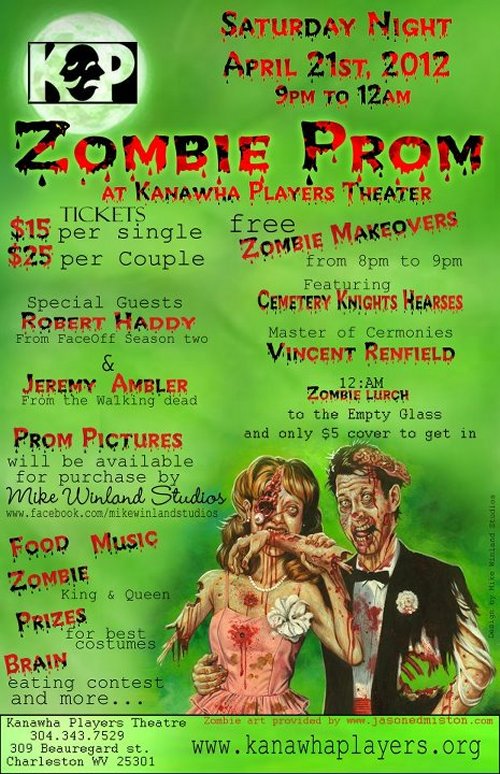 Charleston’s preeminent Ska/Punk powerhouse, The Tom McGees (playing the after Zombie Prom party mentioned above), are recording their first CD, and you can help…

Give generously and you can secure a copy of the CD, plus other goodies.  And you can check out the band on RFC 152 and again on next week’s show. And on May 4, get ready for a massive benefit for their album project. 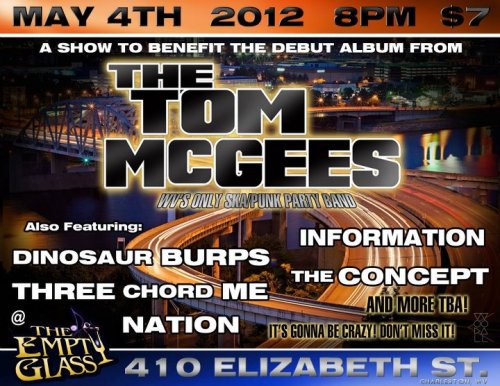 Thursday, April 26, sees the release of the PORKCHOPP3D trailer at The Empty Glass.  In celebration there will be bands, food, and screenings of all of Razor Sharp Production’s short films/music videos/trailers from the past couple of years. Proceeds from this event will go towards post-production of PORKCHOPP3D! FEATURING THE MUSIC OF THE RENFIELDS!

You can also support Porkchopp3D by contiributing to their IndieGoGo finishing fund you only have a week or so to kick in….

Two great bands are playing at Pat’s Bar in St. Albans,  Old West Main Accross From 7 11 at the bottom Of Coal River road.  This is the debut for Mama’s Mistake, and fans of Radio Free Charleston are well-acquainted with the power of InFormation.  Pat’s Bar is quickly turning into a Western Kanawha County Mecca of eclectic music.

A recent addition to Charleston’s excellent pizza scene, Pizza Barbarossa has quickly become a personal favorite, due in part to the fact that they will put spinach and tomato on a pizza with red sauce. This is pizza done by the folks behind Creperi Cafe and the legendary Mykonos, so you know it’s good. Just look at this pizza… 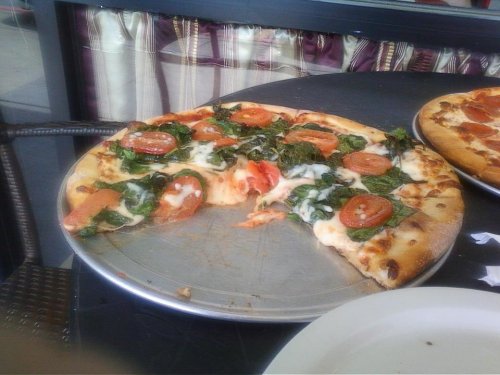 …mouth-watering, isn’t it. With Barbarossa’s joining the ranks of Charleston’s gourmet pizza scene, I’d say they stand head and shoulders above their competition. You can find Pizza Barbarossa at 100 RHL Boulevard, in the Dudley Farms shopping center, next to Qdoba.

Friday, from 7:30 PM to 10:30, The Albans Art Center presents “Lost Airmen of Buchenwald,” a documentary that chronicles the little-known story of Allied airmen imprisoned at the Buchenwald Concentration Camp in the waning months of World War II.

In the summer of 1944, 168 airmen from the US, England, Canada and other Allied countr…ies were captured in Paris by the German Gestapo and sent to the infamous “Koncentration Lager Buchenwald” in Germany. Falsely accused of being “terrorists and saboteurs,” the airmen faced a terrifying fight for survival and a race against time to escape their execution.

A controversial moment in history that their home countries tried to hush-up, Lost Airmen of Buchenwald tells this harrowing story through interviews with seven surviving members of the group, including their heroic commanding officer. The film follows them from their days hiding with the French Resistance to the darkest corners of the Holocaust, where they struggled to survive as Germany collapsed under the weight of the advancing Russian and Allied armies. 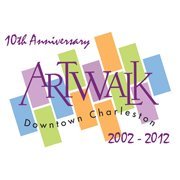 Downtown Charleston’s ArtWalk happens next Thursday, from 5 to 8 PM, and it’s free, all over the downtown area. The Downtown Charleston ArtWalk is presented by the participating galleries and businesses in cooperation with the Charleston Area Alliance. This is a great chance for folks who work downtown to stay late and enjoy the city, or for folks outside the city to venture downtown without feeling the sting of the user fee or the parking meter vultures (after 6 PM, anyway).

This is a great chance to get out and support local artists. Many of the galleries schedule openings and receptions during the evening, and the downtown area turns into a big, artsy, party.

The No Pants Players will perform their brand of improv comedy this Saturday, April 14, at the historic Alban Arts and Conference Center (65 Olde Main Street, St. Albans, WV 25177).  The show begins at 7 PM, doors open at 6:30 PM.  Tickets are $8 for children under 12 years of age, $10 for adults.

The No Pants Players are back this month at the Alban Arts and Conference Center bringing side-splitting hilarity to the masses.  This is the troupe’s eleventh season of improv comedy, similar to the popular television show, “Whose Line Is It, Anyway?”  Audiences are often asked to prompt the actors with scene suggestions which are subsequently and hysterically portrayed right before their eyes with no preparation.

This month,the No Pants Players welcome special guest improv comedy troupe from George Washington High School, Batteries Not Included.  These bright and witty youngsters tickle funny bones, slay audiences with laughter, and provide belly-aching guffaws, all before curfew.  Batteries Not Included is the next generation of improvisers keeping the comedy tradition alive in West Virginia.

This performance is appropriate for all ages. Visit their website,   or call the toll free number 1-877-IMPROV, for more details. 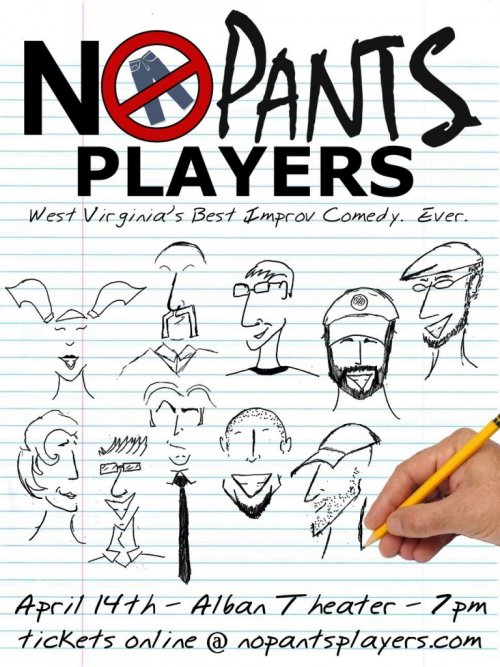 Emily Burdette and her 3-piece band will play an hour long set at the Davis Fine Arts Theater on Saturday, April 14 at 7:30 PM. Emily is a recent grad from the WVSU Master’s program in Media Studies. She recently released her debut EP which includes “Fall Air,” “If My Heart,” “Magic Beneath the Rust,” and “Blind For Your Love.” Admission is $10 at the door. Admission for students FREE.

This is your chance to see Emily, guitarist Shawn Kasten, bass player James Townsend, and drummer Luke Mitchell. James and Luke may be familiar to fans of Radio Free Charleston from their days in The Syndergy Collective. 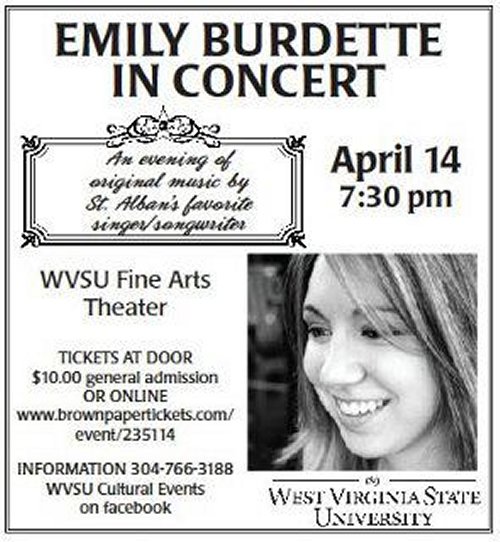 The cheap and easy way to support the local scene is to watch, and spread the word about, Radio Free Charleston.  This week’s show includes music from Charleston’s Godmode Broadway, Clarksburg’s The Amorous, and international nerdcore rapper, DualCore, performing in Charleston during last year’s Hack3rCon. All you have to do is watch the show and tell other people about it.

We’re in the middle of a weekly run of episodes, and next week’s show is shaping up to be another winner, with music from The Renfields and The Tom McGees, plus an amazing short semi-documentary by Stephen Schmidt. 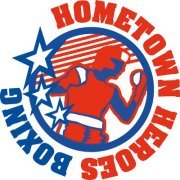 This is an amateur youth sports program. You can show your support by attending this event. Ticket prices: Adult General Admission $15, Child (under 13) General Admission $10, VIP are $20, Tables $200(seating 8 and includes complimentary food platter).

Call 304-562-1020 to purchase your tickets today! Limited amount of VIP tickets are available. www.hometownheroesboxing.us. Bouts and boxers are subject to change. No refunds on day of event. Held under sanction of USA Boxing.

Okay, there’s a ton of cool things to keep you busy. Now quit whining about how there’s nothing to do in Charleston and get out and support the local scene! And if you want to plug an event I misssed, please use our coments section to spread the word!