Suspense of the Unusual Kind 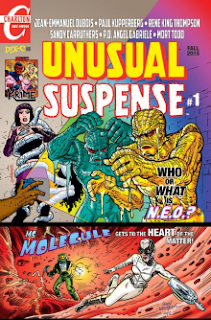 Over the past year I’ve written a lot about the Charlton Neo movement, a revival, of sorts, of a beloved but obscure comic book company that never quite ran with the big dogs of Marvel and DC, but which carved out a niche as place where creators could find freedom from the type of corporate editorial meddling that has stifled so much creativity in the industry.

Charlton Neo and The Charlton Arrow (a Facebook-spawned print anthology) begat the Pix-C webcomics, which are a weekly perk of the Charlton Neo Patreon site. Now we have the first print compilation of Pix-C strips, and it is a ton of fun.

Unusual Suspense is an anthology title with three fun comic strips collected from the Pix-C website, and presented in print for those of us who prefer to read their comics on paper. The printing and coloring is state-of-the-art, but the spirit is pure Charlton. This book brings you 45 solid pages of great comics, along with a contents page and a page of messages from the creators. It’s a terrific value and a great sampler than ought to win over some holdouts who are reluctant to sign up for the Pix-C website. 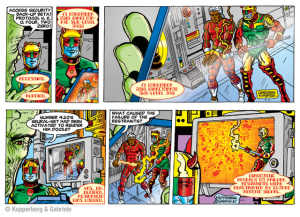 A bit of N.E.O. by Paul Kupperberg and P.D. Angel Gabriele

Our first story is N.E.O., which stands for “Non-sequentially Evolving Organism.” It’s a rollicking science-fiction/time travel  adventure that tells the story of a clone from the future who escapes from a lab using a time-travel device. He winds up in New York City in 2015, meets a young lady by chance and is quickly pursued by super-powered henchmen of the evil Dr. Kliener. By the end of this first story we only have hints of N.E.O.’s powers and abilities and are left wanting more.

Veteran writer, Paul Kupperberg, tells us that he’s making this up as he goes, and you can tell he’s having a blast letting the story evolve organically. P.D. Angel Gabriele provides artwork filled with enthusiastic dynamism that shows a strong, and delightful, Jack Kirby influence, while retaining his own natural style. The twenty-one page first installment flies by way too fast. 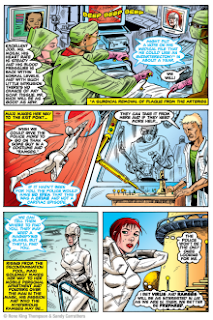 Up next we have Ms. Molecule, a new spin on the shrinking superhero genre made newly-notable by the success of Marvel’s Ant-Man movie. Ms. Molecule, however, echoes more of the 1966 movie, Fantastic Voyage, where a crew of doctors is shrunk down to microsopic size so that they can enter the bloodstream of and perform surgery on a diplomat. In this story, Maxi Moilin is a college student and gymnast with a rare form of cancer. Left wheelchair-bound by her disease, she submits to an experimental treatment which causes her to shrink to a tiny size. As long as she’s small, her disease is in remission and she has the full use of her legs. At full size she’s still in her wheelchair.

Taking advantage of this, the university makes her part of a special surgical team, allowing her to use her new abilities to help other people, while continuing her studies.

This opening segments sets up Ms. Molecule and her supporting cast and introduces us to her world, and we get two mini-adventures: First there’s a teaser for future stories about microscopic medical terrorists, and then we have a full-on mystery involving a race horse. The story, by Rene King Thompson, moves along at a brisk pace with clever dialogue, good characterization and tight plotting, while Sandy Carruther’s art deftly switches from the microscopic world to our normal world with solid storytelling and great design work.

The seventeen pages of the story are finished before you know it. Like a well-paced television drama, Ms. Molecule packs plenty of story into a small package. Were this a Marvel or DC comic, they would have stretched this out for a year or more. 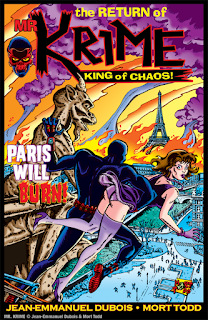 Filling out the book we meet Mr.Krime, King of Chaos, by Jean-Emmanuel Dubois and Mort Todd. This is a quick introduction to an anti-social super-villain in the mold of such European anti-heroes as Sadistik and Diabolik. It’s just six pages, but we are introduced to the son of a missing super-villain from the sixties who disappeared following the failure of his plot to take over the world with robot replicas of world leaders. It seems the apple doesn’t fall far from the tree, and Junior is hell-bent on picking up where his dad left off. This one definitely leaves you wanting more. Dubois has nailed the style of the European stories that inspired Mr. Krime, and Todd tackles the artwork in a manner that looks like a gene-spliced cross of Steve Ditko and Tom Sutton.  This is good stuff.

Unusual Suspense is an absolute treat for fans of good, fun old-school comics, made far from the influence of corporate suits and focus groups. This is the kind of stuff that inspried people like me when we were kids. The raw energy and enthusiam is such a refreshing change from the typical mainstream comics being published today.

You can order print or digital editions of Unusual Suspense from Mort Todd or from Amazon, if you have Prime and want to save on shipping. If you’d like to follow these comics, along with several others, as they’re posted, one page every Sunday morning, then think about signing up for Pix-C at the Charlton Neo Patreon site. As little as one dollar a month gets you access to over a dozen terrific comic strips.

The next Pix-C anthology will be Roger McKenzie’s Frenzy, collecting Spookman and Knightengales. It’s another Charlton Neo winner.