“The Best Of The West” Back In The Saddle 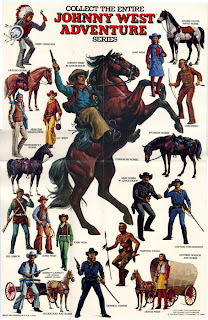 The Ballad Of Johnny West

There were four big action figures that all the kids wanted back in the 1960s (I know, I’m dating myself).

GI Joe was the original action figure. Originally nearly a foot tall, he’s gone through a lot of changes over the years, but he’s still with us. Captain Action was the first super-hero action figure. The Captain has been revived in comic book form and as a limited edition figure, and I’ve written about his extensively here in PopCult. Even Major Matt Mason is coming back. The bendy-style astronaut figure will make his way to the big screen soon, portrayed by his biggest fan, Tom Hanks.

Then there was Johnny West. King of the cowboy action figures. Johnny hasn’t been so lucky. For years the ownership of his name has been in trademark limbo. His only appearance in the mainstream media was being mistaken for a vibrator in “American Pie 2.” An attempted revival fizzled out earlier in this decade, when a poorly-packaged reproduction was released by a company that was eventually sold to a firm that merged with a rap concert promoter. In the resulting mess, the reissues became less accurate and eventually the line was abandoned and we didn’t know if we’d ever see our cowboy buddy again.

Yet, from 1965 to 1975, Johnny West and his pals rode the toy aisles with pride. They’ve got a wild history, which I’ll condense here, and there’s a strong West Virginia connection. Most of these action figures were produced in Glen Dale, near Moundsville.

You can visit The Marx Toy Museum in Glen Dale. It’s owned by legendary Marx Toy collector Francis Turner. That’s a look at their prototype room above.

Back in the 60s, Marx Toys was the number-one toy company in the USA, with factories all over North America. Run by the colorful and clever Louis J. Marx, Marx Toys managed to outmaneuver their competition on a regular basis.

In 1964, when Hasbro introduced GI Joe, Marx rushed their own version, Stony Smith, into production. Stony was basically a Green Army Man blown up to 12-inches tall. he was a solid hunk of heavy olive green poly-plastic, who only moved at the shoulders and elbows. You could pop a spring loose and remove the arms and head, which came in handy if you had a brother five years older than you,and you needed an equalizer. Marx also produced a similar Daniel Boone figure, based on the Disney show, at the same time.

Sales reports for Stony Smith came in for Christmas, 1964, and they left a lot to be desired. Marx decided to add more GI Joe-like articulation to his figures. They’d be able to bend their legs and knees now, and in addition to Stony Smith, Marx planned to release a figure based on the popular TV show, “The Wild Wild West.” If they couldn’t compete with GI Joe as a military figure, they’d see what would happen if they tried a cowboy.

Then the sales reports came in for Daniel Boone, and Marx decided to drop their licensed figures, beef up the articulation and release their own character, “Johnny West.”

At one point Marx considered releasing a figure of Robert Conrad as James West, but for undocumented reasons dropped their licensing efforts and focused instead on “Johnny West,” since they already owned that name after using it on another toy in the 50s. Reportedly, the licensing fees for “The Wild Wild West” were more than Marx was willing to pay.

They put the Robert Conrad head on the shelf, eventually using it for “Captain Maddox.”  They also sculpted a new cowboy body that didn’t look like James West did on TV. Years later the James West body would be used for Sam Cobra, a bad guy, molded in black. Waste not, want not.

The line became a huge success without licensing other properties, and was expanded to include Chief Cherokee, Johnny’s Indian companion, Jane West, his wife, four kids, horses, The Fort Apache Fighters (including General Custer) and Sam Cobra. Marx even released Knights, Vikings and a spy in the same style–a hard poly-plastic body with vinyl and hard plastic accessories.

If you want to dig into the details of the line, there are two invaluable websites to visit. First is Stewart’s Best Of The West. Scott Stewart is a noted action figure collector, and he’s building a great site with information on the variants and specifics of the Johnny West line over the years. He also sells some great reproduction and custom items for Marx figures.

Then we have Tom Heaton’s Vintage Toy Room. Tom wrote a great book on Marx action figures, and he continues to update it with expansion modules. His site offers some great vintage items on sale, and has loads of information on the history of Johnny West. The image of the “Wild Wild West” display shown above comes from Tom’s website. One of the most refreshing things about Tom’s book is that, unlike a lot of authors who cover collectible toys, he doesn’t pretend to have all the answers. He freely admits that he’s still learning about the toys.

This approach really comes in handy with Marx action figures, because, with the toys being produced in this country, there are all sorts of bizarre variants and oddball figures floating around out there. Marx encouraged his employees to take home examples of the toys he made, and sometimes they’d take stuff that was made in strange colors. We may never know the full story of Johnny West toys.

But we do know that Johnny may be riding back on the range. Noah and Terri Coop own a company called Marxman Brothers Creations, and they run the Circle X Ranch website (“Circle X” was the name of Johnny’s ranch). Over the last few years, MBC has acquired the trademarks for “The Best Of The West,” several of the characters names, and recently “Johnny West.” Terri, a lawyer, has kept a blog detailing their legal travails, but the real treasure here is the MBC website, where you can order Marx-style figures with dozens of beautifully-painted heads. The figures run the gamut from reproductions of rare figures from the past, like Bill Buck (above) or Jed Gibson, to figures that bear uncanny resemblances to actors with names like Clint, Chuck, Mel, or even A Man Called Bruce (below). The figures usually run around forty bucks, but if you’re a Marx fan, they’re well worth it. I’ve picked up a few of these Marxman Brothers figures recently, and they are top-notch. They have the same look, feel and heft that I remember Marx figures having from my childhood. MBC also sells a ton of repair, and restoration material, and reproductions of the easily-lost accessories.

With the pending return of Mr. West, a lot of collectors are going to be very happy, myself included. You see, though I remain a loyal collector of Adventure Team GI Joes (the ones with fuzzy hair and Kung Fu Grip), I recently went on an eBay spree, buying up broken Marx figures and reassembling the parts into whole action figures.

If you’ve ever wondered what an eBay spree looks like, check this out.

That’s one corner of my living room. The Marx figures are living there until I have time to redo the office. Now, with the legal trail cleared, the Coops should be wrangling Johnny West back to collectors soon. We’ll keep you posted here in The PopCulteer.

The King Of Country Western Troubadours

Unknown Hinson is coming to The Sound Factory on Friday, May 22 at 9 PM. The Scrap Iron Pickers will be opening. You are COMPLETELY INSANE if you miss this. Tickets are available now for a mere fifteen dollars.

This man is not only the vampiric embodiment of the true spirit of Rock N Roll and the voice of Early Cuyler on “Squidbillies,” but he can also cure rickets with a wave of his hand. After the show he’ll be hanging around to meet fans, sign autographs and kiss babies. You should contact Charleston’s top concert booker, Roadblock, via his MySpace page for tickets. You’d better buy ’em now, or you’ll be stuck outside with the unwashed masses, missing the show and feeling your spine curl.

There’s A Million Things To Do In Town, So Quit Complaining.

Good LORD there’s so much stuff going on in town this weekend!

The No Pants Players are running around with no pants at The La Belle Theater in South Charleston Saturday night. Six bucks gets you all the improv comedy you can eat. It starts at 8 PM.

The West Virginia Symphony Orchestra is presenting a semi-staged version of the opera, “La Boheme,” Saturday night, too. Check out all the Gazz coverage. If, by “semi-staged,” they mean the singers won’t be wearing pants, then I think the Players may have grounds for a lawsuit.

Punk Rock Messiahs, my adopted nephews, The Concept, will be at The Blue Parrot on Friday and Saturday at 10 PM. Friday night they’re playing with Sarasota. Saturday they, and Down Goes Frazier, will be playing with Pittsburgh’s Catastrophe. Five bucks gets legal adults in the door.

Sam’s Uptown Cafe hosts Mike P and The Lower Case G’s Friday and Saturday, at 10 PM with a four dollar cover. Civil State travels to The Riverside Cafe in Winfield Saturday for an 8 PM to Midnight show with a two-dollar cover. Three blocks away, at The Creekside Cafe, Todd Burge and His Odd Urges take the stage at 10 PM. Todd and his Urges will also be at the Connections Concert Series in Hurricane Friday.

Freakbass and The Rabble Rousers funk up The Empty Glass Friday night. 40 lb. Snapper is the catch of the day Saturday, while the inaugural “WV Film Night” at the Glass takes place Sunday. Friday and Saturday’s shows start at 10 PM, with the usual EG cover charge, while Sunday’s film festival, featuring the work’s of Eamon Hardiman, kicks off at 9 PM with no cover.

One last cover-free show to report: Charleston’s Teen Idol finals are Saturday at 1 PM at the Macy’s Court in the Charleston Town Center. Laura Summerhill, also known as “The Beauty Queen” in RFC faves “Captain Crash and The Beauty Queen” is a finalist. RFC fans should go cheer her on ( I can’t, this year). You should also pelt the other contestants with rocks and garbage to heighten her chances. Maybe I should put in a disclaimer here about how the pelting part is just a joke.

Geez, and there’s the Head First show at The Hansford Art House, too! Friday only kicking off at 6 PM,

The Cool Comic will return next week with a double-dose to make up for me slacking off this week. Don’t forget to watch RFC 69, our special edit of “Go Van Gogh: The Sad Truth.” This kicks off “Mark Beckner Month” on Radio Free Charleston. Check the PopCulteer next week to see what other topics float to the top of the tank.