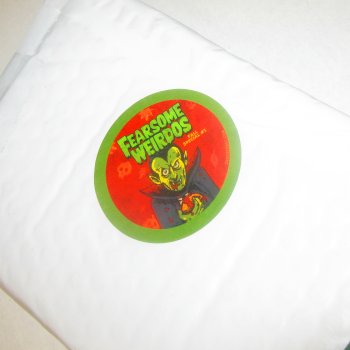 To be honest, these came in while your PopCulteer was running around Staunton, Virginia celebrating his anniversary with his wife. It took me a few days to find the time to open them.

About a month ago, I told you about the Kickstarter campaign for Fearsome Weirdos: Harvest of Horrors by  Robert Jiminez. I had told you about the first series of Fearsome Weirdos in The PopCult Gift Guide a couple of years ago. The campaign was already fully-funded by the time I wrote about it, but I wanted to give you an update that, less than a month later a nifty little package (seen above) was in my mailbox, and I thought I’d let you see what I got. 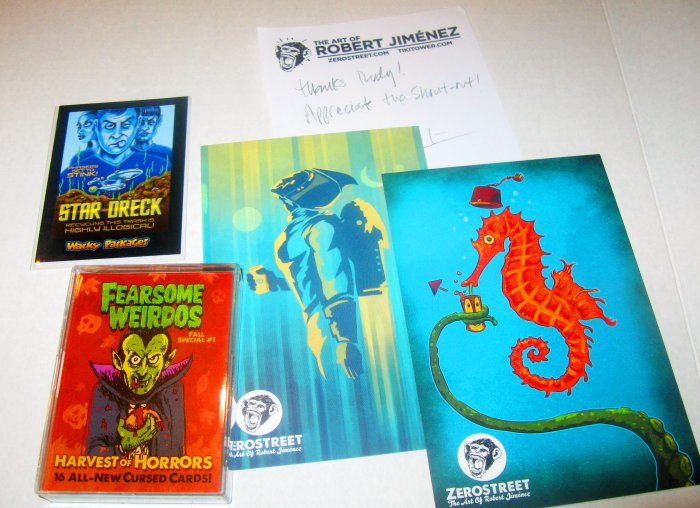 The set included 10 Petrifying Product Parodies, 5 Alarming Authors (one of whom is hiding behind another card in one of my photos), 1 Wrapper Card/Checklist., plus 2 Bonus Cards and a neat little plastic case to hold it all. Also included was a bonus Metal Card, featuring H.P. Hovercraft and a Taco Hell sticker. 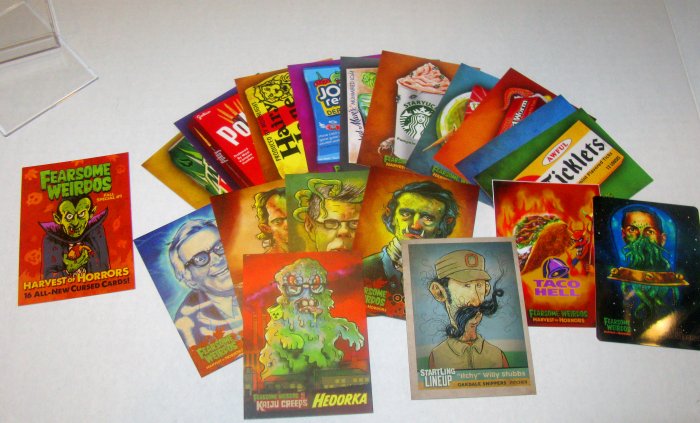 The card backs feature the pencilled roughs for the designs on the front of the cards. 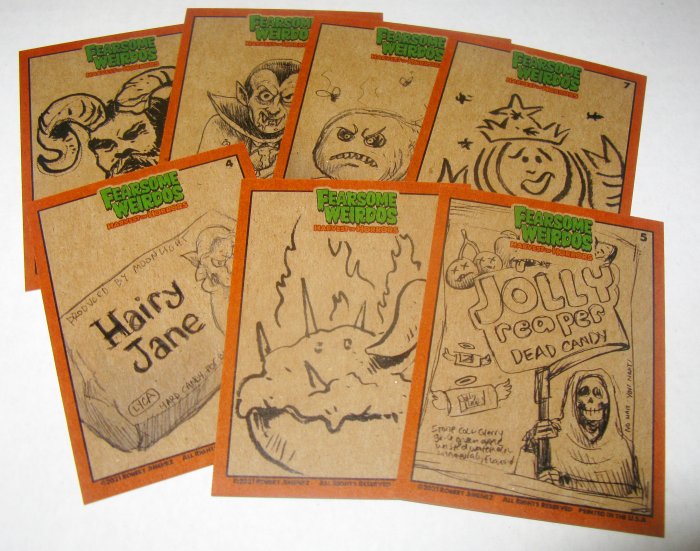 All-in-all, it’s a great little set, and it helps set the mood for the Halloween season, which is upon us (at least if you check Big Lots or the Spirit Halloween Stores). Robert’s art is just spectacular and the horror-host level humor is dead-on.

Robert’s work has appeared on album covers, in publications such as THE THING: ARTBOOK, VISIONS FROM THE UPSIDE DOWN: STRANGER THINGS ARTBOOK, Tiki Magazine and Pinstriping & Kustom Graphics Magazine, and has shown in galleries including Disneyland’s Wonderground, Harold Golen, M Modern, Creature Features, and Bear & Bird among others.

Robert is also the author and illustrator of the books LAST CALL AT TIKILANDIA, STRANGEWISE NO.9, CHIMPS & TIKIS AND RAVEN-HAIRED BEAUTIES: AN ADULT COLORING BOOK, NOSFERATU’S CHRISTMAS IN NEW YORK and WEIRD-ASS FACES VOL.1, SOPHISTICATES AND WEIRDOS and the trading card set FEARSOME WEIRDOS.

Once Robert is done shipping out all the Kickstarter rewards and sketch cards, he will put Fearsome Weirdos: Harvest of Horrors up for sale in his webstore (and likely on eBay and at Amazon), so in a few days or so, you might want to check those out if you want a set of your own.