The Holiday Spirit Creeps Onto The AIR

Ten days out from The Big Day, The AIR will take baby steps to achieving Christmas Spirit Tuesday with two classic AIR Holiday Specials that we dug out of the vaults. You can tune in at the Website or on the neato-keen little embedded player over on at the top right column of this blog.

It’s Radio Free Charleston and The Swing Shift bringing you all the holiday joy with special episodes recorded in 2016. Next week we’re going to bring you a new RFC Holiday Special, where yours truly will be joined by Mrs. PopCulteer Mel Larch. But this week we bring you some classics.

Tuesday at 10 AM and 10 PM we have a two-hour Radio Free Charleston Xmas Special, loaded with tons of local artists singing the songs and having the fun of the holidays.

The second hour of this show is largely comprised of the 1989 Radio Free Charleston Christmas show, complete with holiday wishes and live, in-studio, interviews and performances.

hour two
“Jam theme”-a special rendition of the Radio Free Charleston theme song, recorded at The Charleston Playhouse and featuring most of the Charleston Playhouse Quartet, with the addition of Stephen Beckner, who provides a wintery spoken interlude.
A 1989 commercial for Budget Tapes & Records where your PopCulteer provides all three voices, including the ghost of Bing Crosby.
Go Van Gogh “Santa Claus Is Back In Town”
Stephen Beckner and John and Tim Rock from Go van Gogh, live interview in the studio.
Go Van Gogh attempts at Christmas carols
Three Bodies (Kris Cormany, Brian Young, Brian Lucas) live interview in the studio
Three Bodies “Three Bodies”
“Why Do We Have To Work Skit”
Clownhole (Sham Voodoo, Flair) Christmas message with the accapella punk “Deck The Halls”
Charleston Playhouse Jam Session “Jingle Bells”
Plugs for “The Last Ride,” the final concert by Brian Diller and the Ride, which happened one week after this show first aired.
Mad Scientist Club “I Saw Santa Claus”
Gary Price Christmas wishes from The Swivels
Charleston Playhouse Jam Session interview with John McIntyre leading into “Heaven and Mud/Train Wreck The Halls/Will The Circle Be Unbroken”
Gary Price from The Swivels, pre-taped interview in the production studio
Clownhole in the studio, rambling semi-interview
Go Van Gogh in the studio, going off the rails a bit.
Go Van Gogh “Big Bottom (accapella)”–this was considered appropriate for the holiday for some reason
Melanie Larch   “Ave Maria”
Melanie Larch and Mark Scarpelli  “Christmas Time Is Here” 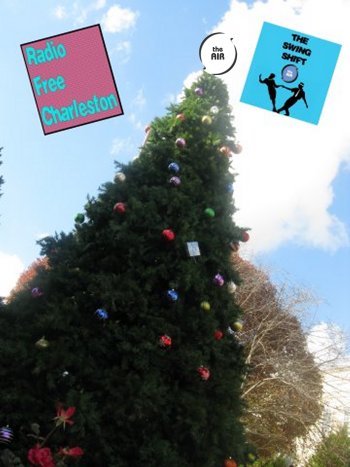 Since we’re cramming two hours of radio into a three-hour slot, the third hour will be filled with a mystery holiday treat!

At 3 PM  check out The Swing Shift XMAS, again, hosted by your PopCulteer, and with the following tracks…

This is part of our special holiday programming on The AIR, which we will be replaying the heck out of for the next couple of weeks, so learn to like it, folks. Seriously, next week we’re going to be lousy with this stuff, 24/7.