It’s a bit of a perfect storm for comics fans who support projects via Kickstarter. Today we’re going to tell you about five projects featuring work by acclaimed comics veterans, four of which are already fully-funded, so that you can see what kinds of cool stuff is happening in the world of sequential art beyond the scope of Marvel, DC and even the direct market. Most of these campaigns still have a couple of weeks left, but you want to act fast so you don’t forget.

I’m starting off with the most in-depth preview because this project just launched yesterday, and has a way to go to reach its ambitious goal. This campaign has about a month left, but it could use a good surge.

THE MASTERS! are a group of villains inspired by master artists of the 20th century, and in this five-issue series, they prove worthy opponents for some of history’s favorite super heroes! This is he brainchild of Austin Hough, a fellow MEGO action figure enthusiast, and a man after my own heart. He has gathered together a “who’s who” of classic silver and bronze-age comic book artists to pit the villains he’s created against a wild collection of some of the most fun public domain superheroes available.

The roster of artists include Ramona Fradon, Tom Palmer, Joe Staton, Mike Vosburg, Alan Weiss, Bob Hall, Mike Grell, Pablo Marcos, Romeo Tanghal, Alex Saviuk, Al Milgrom, Tom Grummett and many, many others that would have me typing all day to mention here.

The story pits the heroes against the villains in the manner of the classic Batman team-up comic, The Brave and Bold, so that in each issue we have two or more of our revitalized Golden Age heroes teaming up to take on our artistically-influenced bad guys. As a guy who spent the better part of the last 18 months wearing Rene Magritte-inspired facemasks, this is right in my wheelhouse. The Masters are: Sir Real Ordeal, The Clerk, Graffiti, Panorama, and Monsieur Petit Renard. 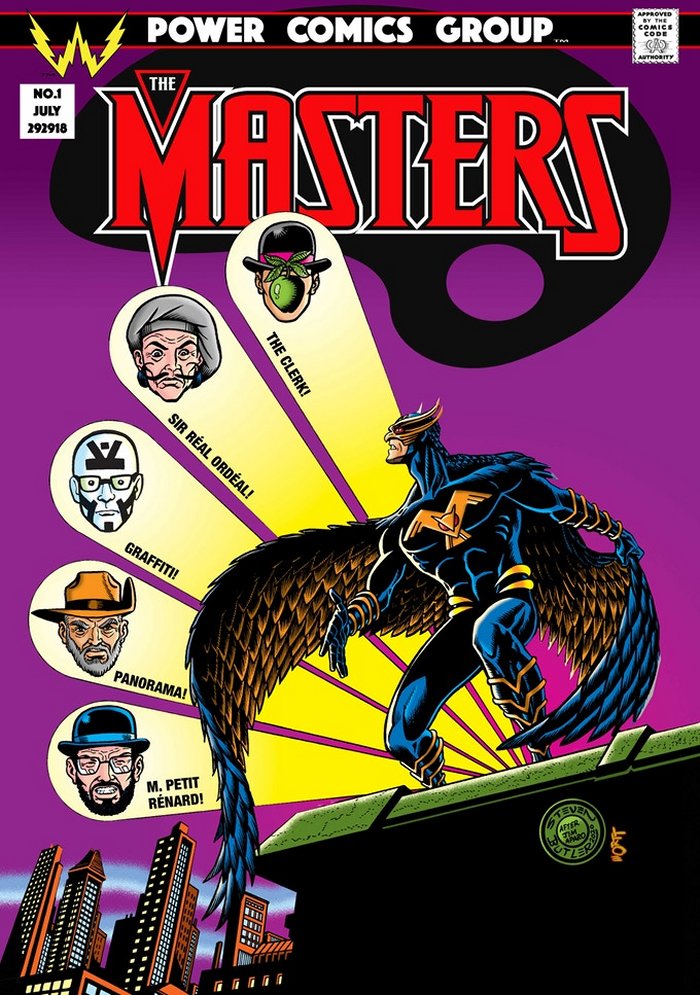 The covers to the comics pay homage to classic covers from the 70s, and 80s, and the rewards for higher tiers are impressive as heck, ranging from a tabloid-sized final issue to trade paperback collections, a calendar, a “Who’s Who” style guide to the characters, a jigsaw puzzle, action figures, tin lunchboxes a set of Slurpee-style cups with heroes emblazoned on them, posters and prints, Ben Cooper-style masks,  and even more gooides to be unlocked if they top their goals. This one punches all of my nostalgia buttons.

You can keep up with the project on Facebook and Instagram, and support the Kickstarter project HERE.

BLIGHTER: TRACKER OF THE REALM

BLIGHTER is an original graphic novel by writer Jeff Parker (X-Men First Class, Flash Gordon, Batman ’66 and Future Quest) and artist Drew Moss (Vampirella/Red Sonja, Star Wars, The Crow, Army Of The Dead, M.A.S.K. and Heavy Metal). Available in both paperback and digital download editions,  BLIGHTER is a dimension-spanning, action-packed suspense ride, chock-full of monsters, and a swaggeringly brutal Tiger-man who fancies himself a living legend.

I have to admit, this one had me at Jeff Parker, one of my favorite comic book writers.  About this project, Parker says, “Despite all the classic heroes I’ve written, super and adventurous, I have to say I really enjoy characters who are terrible role models and just a whisker away from being the villains of the story. That’s Lord Blighter, renowned tracker from The Old World who comes to Earth to help us with chaotic threats all over our planet. He’s unmatched at hunting these fiends – just ask him, he’ll gladly tell you!”

And here’s a Tiger-looking dude, to boot. How can this Tawky Tawny fan pass that up?

The book has met its goal, so if you kick in now, you know you’ll get the book, and maybe even some keen stretch-goal gravy. Check it out HERE.

You may remember JetCat from a series of Nickelodeon shorts in the 90s, but Jay Stephen’s creation had a pretty good run as a comic strip, and this book collects them all.

Jetcat & Friends is the definitive, full-colour collection of every one of Jetcat’s comic book adventures, combining the long out of print stories from Jetcat Clubhouse, Nickelodeon Magazine, and the multiple Eisner-Award-nominated Land Of Nod Rockabye Book into one, ultimate, 248 page explosion of colour!

These are great comics for all ages and show off Stephen’s mastery of the humor comics genre.

This is another project that is already fully-funded, so you know you’ll get it. Check it out HERE.

This Kickstarter is written by Karl Kesel, longtime comics creator for DC and Marvel (he created King Shark, who was seen in The Suicide Squad comics and movie), and drawn by Dan Schkade and it brings together two of Kesel’s independent creations in one fun adventure.

Debuting in successful Kickstarter campaign in 2019,  Impossible Jones, features a thief with the newfound super power to shape-shift. She learns, it’s easier to rob New York City blind if its police and citizens believe she’s the only superhero standing in the way between them and dire threats. Along the way, despite her best efforts, she becomes a hero.

This 34-page adventure odd-couple team has the secret thief working alongside the super-straight arrow, and rumor has it that another Kesel co-creation, Section Zero, will figure into the story.

Kesel describes Impossible Jones as “Grin and Gritty,” and it’s pure superhero fun, sort of in the mold of the late 1980s Justice League International comics.

This is yet another project that is already fully-funded, so you know you’ll get it. Check it out HERE.

Our last Kickstarter alert for today is not for a comic book, but it is comic book-related.  A few months ago I told you about the Madman Ginchy Glider, starring Mike Allred’s beloved comic book hero. Now we have an activity book featuring Madman and all his Madmaniverse friends.

As the blurb says, “Hang out with the cool cats of Snap City (and beyond!) in this sweet activity book! Activities! Word stuff! Stickers! 3D! And coloring!”

The Madmaniverse, that catch-all title for the comics from superstar creators Mike Allred (story, pencils, inks) and Laura Allred (vibrant colors!), comes to life in the Madmania Shindig Activity Book! This is jam-packed with 36 pages of activities, sticker fun, coloring, and 3D images featuring:

And more! There’s even the G-Men from Hell and Cheetahman!

It’s cool. It’s fun. There are higher reward levels with extra goodies and I’ve already kicked in on it.

This is even still yet another project that is already fully-funded, so you know you’ll get it. Check it out HERE.