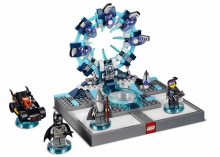 We first told you about LEGO Dimensions back in April. If you recall, this innovative toy will let you build LEGO action figures, and then thrust them into a videogame. This new cross-platform videogame-action figure-building toy hybrid is poised to be the biggest hit of the Christmas season, and part of the reason for that can be seen in this trailer…

Warner Bros. Interactive Entertainment, TT Games and The LEGO Group just released this new trailer for the upcoming LEGO Dimensions, and it confirms the voice talent for the upcoming game, a roster packed with familiar names and voices. Among those lending their voice to the title are Michael J. Fox and Christopher Lloyd from Back to the Future; Chris Pratt, Elizabeth Banks, Alison Brie and Charlie Day from The LEGO Movie; Peter Capaldi, Jenna Coleman, and Michelle Gomez from Doctor Who; and many more.

And yes, Doctor Who will be included in the game…every version of Doctor Who, all of his generations. 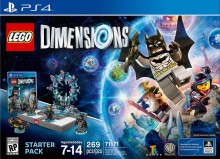 When a mysterious and powerful vortex suddenly appears in various LEGO worlds, different characters from DC Comics, The Lord of the Rings and The LEGO Movie are swept away. To save their friends, LEGO Batman, LEGO Gandalf and LEGO Wyldstyle journey to locations beyond their wildest imaginations, and they soon realize that Lord Vortech is summoning villains from across different LEGO worlds to help him gain control. As his power grows, worlds mix, unexpected characters meet and all boundaries are broken. Our heroes must travel through space and time to rescue their friends before the vortexes destroy all of LEGO humanity.

A fraction of the cast

LEGO Dimensions, the upcoming entertainment experience that merges physical brick building with interactive console gameplay, will include gameplay from “The Simpsons,” “Doctor Who,” Ghostbusters, Portal, Jurassic World, Midway Arcade, LEGO Chima and “Scooby-Doo!” These fan-favorite worlds, many of which have never before been in a LEGO video game, will converge with DC Comics, The Lord of the Rings, The LEGO Movie, The Wizard of Oz, LEGO Ninjago and Back to the Future worlds in one thrilling adventure playable with the LEGO Dimensions Starter Pack.

LEGO Dimensions will be available for the Xbox One, Xbox 360, PlayStation 4, PlayStation 3 and Nintendo Wii U on September 27, 2015.