Cool Toy Of The Week: The Batmobile, you know THE REAL BATMOBILE

This was my first article where I got really excited about new toys of the George Barris Batmobile. As you may know, over the years many people tried to pass off bogus, crappy, Batmobiles, instead of making toys based on the one true Batmobile, designed by George Barris, which Jesus spoke of fondly in the Bible. I have tons of these now.

Short entry this week, because our cool toy is not official yet, rumors have been circulating for a couple of weeks, but reliable sources tell me that Mattel has coughed up enough money to end the feud between DC Comics and master car designer George Barris, and has secured the master toy license to produce the famous Batmobile from the 1960’s Batman TV show. This car has been in legal limbo for years, as it was ruled that Barris owned the design, but not the name or the bat-insignia. There haven’t been any legally-licensed toys of this most famous version of the Caped Crusaders car for over twenty years. 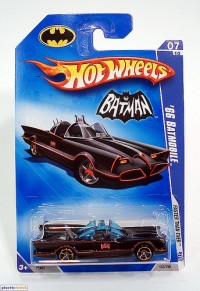 Now we’ll finally get the full gamut–Hot Wheels, 1/18 scale desktop toys, remote-control versions and maybe (though this is a pipe dream) a version scaled for Barbie that we can steal and use for Captain Action! And it’ll be the real Batmobile, not that ugly thing from the 1989 movie that looked like a Goth sex toy, or the ‘roided up SUV from Batman Begins. This is the real deal–the coolest car ever built!

It won’t be a done deal until the official announcement is made, reportedly at the San Diego Comic Con next weekend, but things are looking good for fans of the coolest car in the world. This is a big deal for us aging nerds, trust me. The Batmobile ROCKS!

You can read about the second coolest car in the world here.