“I Came Here For An Argument, Not Abuse” 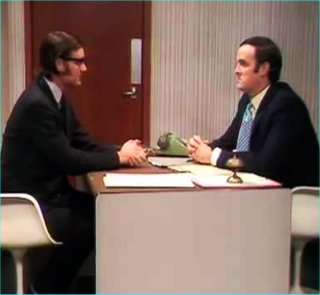 It’s a slightly more distracted than normal PopCulteer this week as I prepare to hit the road next week on my way to ToyLanta.  I’ll be telling you more about that all next week, but today I’ve got a funny/disturbing anecdote about one person’s reaction to one of my recent posts. Before we get to that, I need to give you a little context.

During PopCult’s coverage of Toy Fair last month, I wrote a piece that speculated about the end of the Monster High toy line. I clearly used words like “seems” and “appears,” because Mattel did not put out any official notice that the line was done.

They wouldn’t. Why would they put the entire toy industry on notice that they were abandoning a product line that just a few short years ago was nearly as big as Barbie? The writing was on the wall, but they certainly weren’t going to call attention to it. 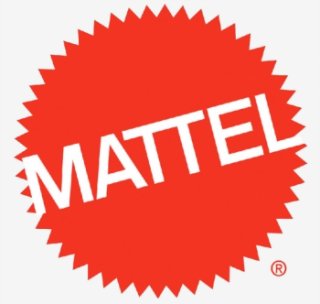 A little more digging on my part showed me that last year Mattel had “demoted” Monster High from being a core brand to just being one of the many low-prioirity lines that they offer their customers.  Product that was intended for release in 2017 was instead slowed down in the production pipeline, spread out over an extended release period, and offered to retailers as “2018/2019” product lines.

They sent out solicitation for these last few dolls last summer, and they’re starting to filter into the few remaining retailers who carry the line now. There are still a few stragglers finishing up what was announced last year, but after that, the line is essentially defunct. They no longer advertise the line on television, but old product is still available at deep discount retailers, and the last few new items have yet to completely disappear from Target and Walmart. Despite these moves Mattel has a few very good reasons for not verifying the line’s cancellation.

First is that they have partnerships with other companies that still produce Monster High-branded books, educational software, websites and programming for their YouTube channel. They don’t want to leave their partners high-and-dry by saying that the line was cancelled.

Another factor is that Universal Pictures holds an option to produce a live-action Monster High movie. There has been a director as well as scriptwriters attached to this project since 2015, and the initial release date was to have been in October, 2016. Obviously, that didn’t happen, but the project is not officially dead, and in the event that Universal decides to put the movie into production, Mattel wants to be able to support it with new toys. It’s highly unlikely that the movie will be made at this point, but why would they kill any possible chance of it happening? 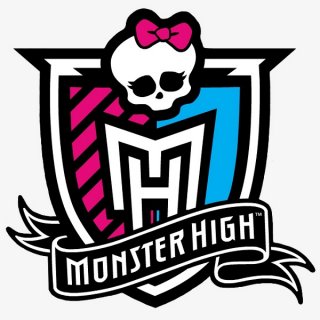 There’s also the matter of trademarks and intellectual property. It’s entirely possible that Mattel will continue producing low numbers of their budget-line five-dollar figures and listing them in their general mechandise catalog simply to keep the trademark alive. This way they can say they’re still selling Monster High toys, even if nobody’s buying them. It protects the trademark for future use.

The reason I’m bothering to explain all this is because I had an email exchange with one very devoted Monster High fan. He claimed that he owned a large, independent Monster High retailer in the UK, and he provided links to a real online store. Because of the ease with which any loon on the internet can claim to be someone that they’re not, I will refrain from naming the store. The person who contacted me was certainly not acting in a professional capacity…or manner, and I would hate to falsely associate an online crank with a legitimate business. I seriously doubt that this person was really as he presented himself. 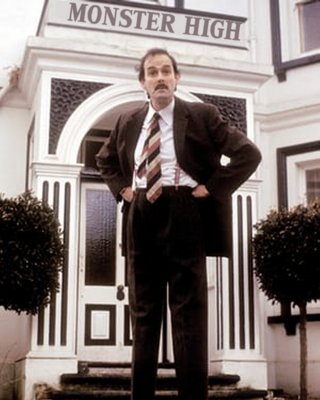 In fact, he seemed to be a graduate of the Basil Fawlty School of Charm and Good Behavior. He started out insulting me, calling me a liar, saying that I was just writing “Fake News” to get more readers, and demanded that I produce a statement from Mattel to confirm that the line was cancelled.

He began in a rude manner and asked for something that, as I explained above, does not exist. I calmly and politely replied and explained the situation, and he accused me of “patronising” him. From the nature of his initial request, I assumed that he had no knowledge of how the toy industry works, so if I came across patronizing to him, it was not intended. For someone who claimed to be a retailer, he became awfully flustered when I told him that he should know whether or not he’d ordered any new product since last summer.

After my second email response, he started saying that I was bullying him, then he’d tell me to leave him alone, and ask one more question which invited a reply. More than once he suggested that this blog should be shut down. After a couple of emails filled with simple-minded insults alternating with accusations that I was bullying him, I finally told him to enjoy having the last word and placed his email address in my spam filter. For all I know he’s still sending me angry emails demanding that I stop bothering him.

What was all the more remarkable about this exchange was that, if I were indeed just fishing for more readers (and naturally, I do like it when people read my blog), I would not have bothered writing about a pop culture property that is near extinction. There are plenty of topics floating around out there that are “clickbait.” Monster High has not been one of them for about three years now.  I wrote about Monster High because I admire the passion of the fans and the cleverness of the customizers and felt that they deserved to know what was really going on with their favorite toy line. I went back and re-read my post just to make sure that I was properly respectful of the fandom and the toy line.

It sucks when a toy line that you love gets cancelled. I remember when Hasbro pulled the plug on the 12″ GI Joe in 1976, and again on the revival around fourteen years ago. I’ve also learned that, if the fandom is strong enough, beloved toy lines can be revived after a few years have passed. I believe that in five or ten years, when nostalgia kicks in, Mattel will decide to give Monster High another shot, regardless of whether or not a movie gets made. For now, retailers just won’t order any Monster High product so there’s no point in making any.

The way the game has been played for the last few decades is that, retailers get really excited about a hot toy, then they order way too many, then they get stuck with overstock, and then they blame the toy for not selling and won’t order any new ones. This is what happened with the GI Joe revival, when Hasbro made a brilliant line to commemorate the 40th Anniversary of GI Joe. The figures did not sell fast enough for the retailers so they dumped them all at deep discounts and let Hasbro know that they were not interested any more 12″ GI Joe product. Hasbro made a couple of abbreviated efforts to keep GI Joe in his original size, but eventually reverted to smaller scales and let the Official GI Joe Collectors Club handle the 12″ stuff.  You can’t sell toys if the retailers won’t order them. 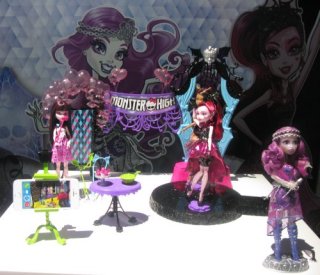 That’s part of what happened with Monster High. Once the line peaked retailers kept ordering, and when subsequent sales fell short, they quickly jumped ship. There was also the redesign of the figures, but that was a “Hail Mary” by Mattel, to try and save the line after the retailers already began to sour on it. The success of dolls based on the movie, Frozen, soared like a rocket and overtook Monster High, and now those dolls are in a steep sales decline.

This email exchange reminded me of my old “Arguing with Idiots on The Internet” piece, but the sad part, the really heart-rending fact in all this is that not one other person bothered to respond to my original post. It attracted about as many readers as my other posts about Toy Fair, but only one person bothered to get in touch with me over it. And he was much more upset than willing to listen to reason. I think the vast majority of Monster High fans who read my piece simply saw it as a confirmation of what they’d suspected, or expected, over the last couple of years.

Next week I’m heading to Atlanta for ToyLanta, which grew out of JoeLanta, which was a toy show devoted to the 12″ GI Joe. Most of the people at the convention will be fans of the original GI Joe. Many of them have daughters who loved Monster High. Hopefully they can share the experience of a favorite toy line falling by the wayside and give them some hope that it may someday come back.