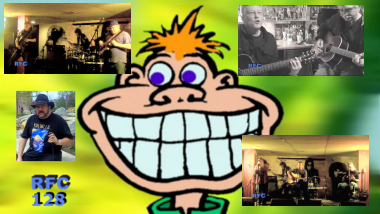 From April 2011, this week we bring you Episode 128 of Radio Free Charleston, “Valhalla State Park Shirt.”  This show features music from Prank Monkey, Jay Oakes and Paul Callicoat and Short of Cash. We also have more classic animation from Frank Panucci.

Our first musical guest is Prank Monkey, who were then the house band for the Wednesday night jam at The Blue Parrot. At that point Prank Monkey was Johnny “Hurricane” Compton, Jamie Skeens and Mike Vandergriff, and you can see them rip through “VooDoo Child.”

Our animation was “Turkey Wang,” yet another bit of classic, mind-altering Frank Panucci animation, re-mastered into Hi-Definition by a crack team of Korean re-tracing artistes.

Our next musical guest came to us courtesy of Doug Imbrogno and WestVirginiaVille.com. Doug shot and edited a music video for Jay Oakes and Paul Callicoat’s musical tribute to The Mystery Hole.

Wrapping up the show is an early incarnation of Short of Cash. This band, lead by Roger Simms, formed at one of the Charleston United meetings, and they were loads of fun to watch before they scattered to the four winds.  You can read the original production notes for this show HERE.