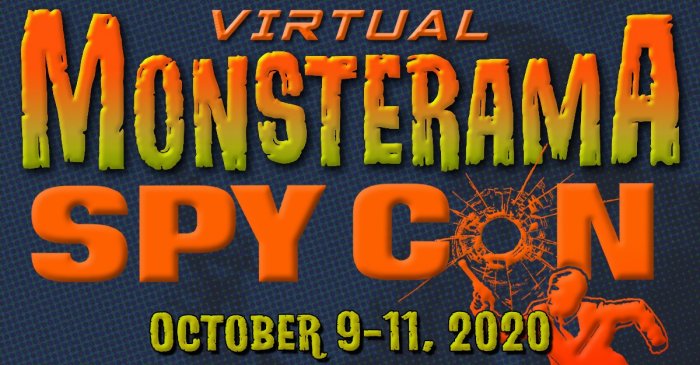 Monsterama and Spy Con Go Virtual This Weekend, and the press release was so concise, that we’re basically going to run it nearly verbatim. These are two combined pop culture conventions devoted to monster movies and spy flicks. I’ve met the folks who put on this show at ToyLanta, and they do a great job. Hopefully next year we can make it down for a real-life version of the show. In the meantime, everybody can attend for free online this year. 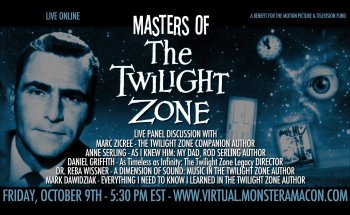 Atlanta fan conventions Monsterama and Spy Con have decided to turn adversity on its ear in order to benefit The Motion Picture & Television Fund. Forced by Covid-19 related restrictions to cancel their annual in-person events, which were scheduled to take place simultaneously over the weekend of October 9th-11th, 2020, the promoters have partnered to mount a virtual event online to raise funds for the charity. The event is scheduled for their original dates online at virtual.monsteramacon.com and virtual.spy-con.com and is free for everyone. Donations can be made at this GoFundMe page. 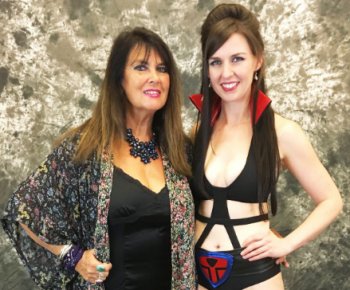 “We’re really looking forward to sharing some great programming with fellow monster and spy fans all over the world,” says event co-chairman Anthony Taylor. “Having our event online has opened us up to a lot of guests that would not have been able to attend in person.” Guests scheduled to appear include actresses Caroline Munro (The Spy Who Loved Me, Dracula, A.D. 1972-seen right with Madeline Brumby), Lana Wood (Diamonds Are Forever, Night Gallery), and Trina Parks (Diamonds Are Forever,DarktownStrutters), actor/director Larry Blamire (The Lost Skeleton of Cadavra), as well as Oscar™-winning makeup artist Chris Walas (The Fly, Gremlins), James Bond film special effects director Steve Begg (Skyfall, Casino Royale), film directors Mick Garris (The Stand, Sleepwalkers,Hocus Pocus), Sam Irvine (Elvira’s Haunted Hills, Oblivion), and Robert Tinnell (Frankenstein and Me, Feast of the Seven Fishes), and many more. A full list is available on the event website at virtual.monsteramacon.com. 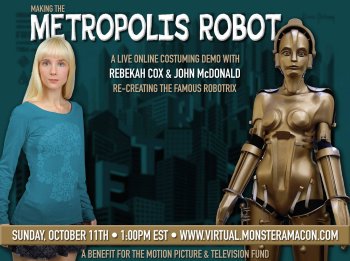 “We’re also very happy to partner with The Motion Picture & Television Fund as our charity this year,” Taylor continues. According to their mission statement, MPTF supports our entertainment community in living and aging well, with dignity and purpose, and in helping each other in times of need. “As film and television lovers and fans, we think it’s a fitting cause to support the people who have done so much to entertain us as they age, or in times of need,” he said. Monsterama and Spy Con are utilizing the online platform Go Fund Me to collect donations for the organization. 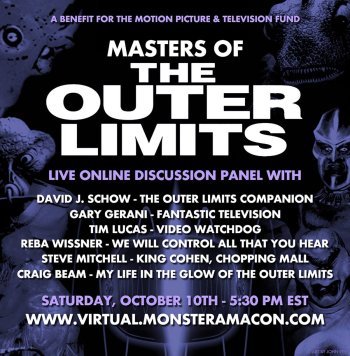 Programming for the online event includes panels on subjects such as television’s The Outer Limits, James Bond Special Effects with Steve Begg (Skyfall,Casino Royale), The Twilight Zone, Dark Shadows, filmmaking, the origins of Dracula, monster art illustrations, as well as demonstrations on makeup effects, costuming, fabrication, and other arts, gaming, screenings, and a gallery of vendors. The complete line-up can be accessed at virtual.monsteramacon.com or virtual.spy-con.com.

About Monsterama/Spy Con
Monsterama was founded in 2015 as Atlanta’s retro monster, horror, and sci-fi convention and has held an event annually every year since. Featuring guests from the acting, filmmaking, literature, art, and comics fields, the convention normally takes place in early October. Next year’s event is scheduled for October 8-10, 2021, at the Atlanta Marriott Alpharetta. More information is available at MonsteramaCon.com.

Spy Con was founded by the Monsterama team in 2018 to fill the void in fan events for enthusiasts of spy- and espionage-related entertainment. Their next event will run simultaneously with Monsterama next October. More information is available at Spy-Con.com. 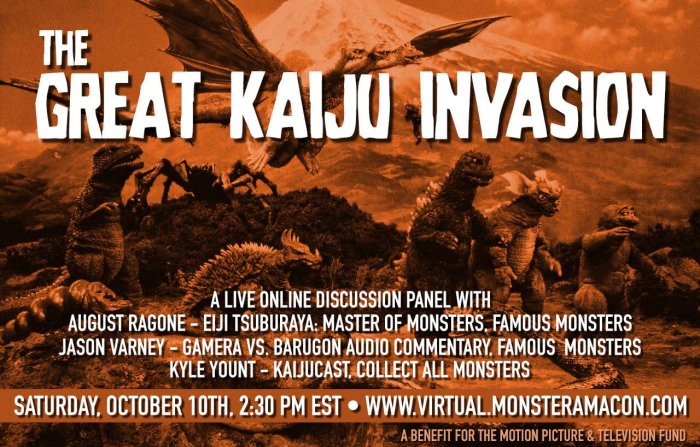 About the MPTF Foundation
In 1921, when MPTF was founded, it was a revolutionary idea – the notion of a whole industry (not just an individual corporation) taking care of its own. At the dedication of the Country House in 1941, actor, director and then-President Jean Hersholt spoke of dreams yet to be realized. He understood that philanthropy can inspire people and institutions to be better than they think they can be. He knew that a combination of vision and resources can make amazing things happen.

The MPTF Foundation exists as a conduit to connect these dreams to our reality. Our efforts realize the vision of our donors and joins their generous philanthropy with the growing human needs of our entertainment community. Those needs, like the entertainment industry itself, are changing at an ever-rapid pace. And, so we turn to members and friends of the entertainment industry to help us deliver on the MPTF mission and take care of our own. The passion and generosity of our community are vital to provide services to industry members today, and to make the dreams of tomorrow come true. They can be found online at www.MPTF.com. 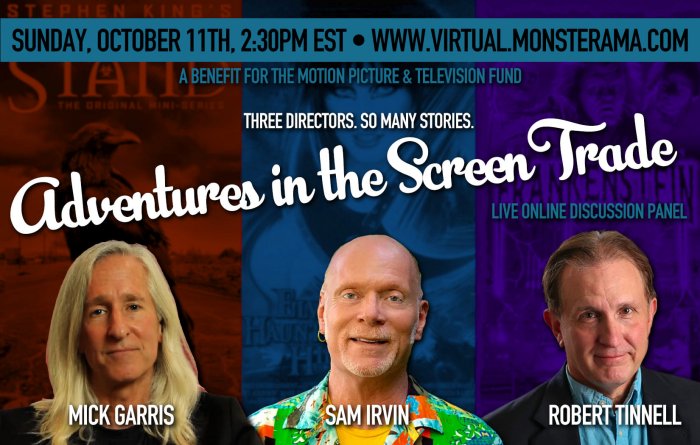