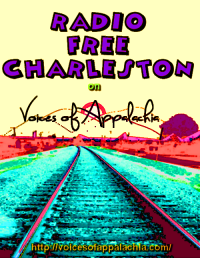 It’s week nine of Radio Free Charleston streaming at New Appalachian Radio, and this week’s show celebrates our companion video program, The RFC MINI SHOW. All the music in the second hour is culled from the archives of The RFC MINI SHOW. You may recall that the MINI SHOW was created to fill the gaps between full-length episodes of RFC as I approached episode 200. It presents a single act, performing a song or three without all the bells and whistles of the regular video version of Radio Free Charleston.

Note: In the second hour, The Terra Firma Ensemble is heard playing Ralph Towner’s “Innocente.” True to the form of the episode of The RFC MINI SHOW from which that recording was taken, I call him “Robert Towner.” Apologies to all involved.

The playlist for our first hour:

The Second Hour, from The RFC MINI SHOW archives:

Super Heavy Duty “My One and Only”

Don’t forget our replays and all the other cool shows on New Appalachian Radio. RFC returns next week with a theme yet to be determined.