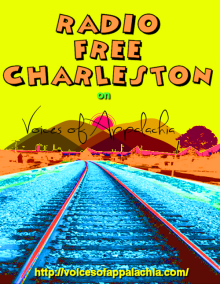 I can officially announce it now. Radio Free Charleston will be returning to its audio roots next week via Voices of Appalachia radio. It’s a streaming service, affiliated with WVSU EDC (or DigiSo, as some folks still call it) and RFC will just be one segment of a very exciting line-up of original programming. I want to thank Eric Meadows for inviting me to be part of this great project.

You can read more about Voices of Appalachia this Sunday in The Charleston Gazette. Bill Lynch has written a comprehensive look at the exciting relaunch of VOA, and you’ll get to see the full schedule. I will offer one spoiler here: Radio Free Charleston will run Tuesday mornings at 10 AM, with repeats Thursday nights following Third Eye Cabaret and, as a favor to my nostalgic leanings, Sunday mornings at 2 AM, which was the original timeslot of the old Radio Free Charleston radio show. All times are Eastern Standard Time.

That last point is important because, being an internet station, Voices of Appalachia will be available anywhere in the world where people have access to the web. The idea is to create a venue through which the voices, art and music of the entire Appalachian region can be shared with the world.

Before we go any further I want to reassure everyone that I an NOT ending the video incarnation of Radio Free Charleston. Work continues on the Radio Free Charleston video program. In fact, after I write this post I have to start working on episode 203, which you will see this Monday right here in PopCult.

Some critics have said that I never got over the end of the original Radio Free Charleston radio show. My response to that is, “Of course not! Why do you think I’m still doing it?”

But the idea to create a new audio version of the show to accompany the video version was irresistible. RFC began as a radio show in 1989 and had a ridiculous amount of success in a short time before it was killed by station management. I couldn’t pass up the chance to revisit the origins of RFC, especially since I now have a huge archive of local music from which to draw.

That’s why I’m referring to the new audio version of the show as “Radio Free Charleston: Volume Three.” Volume Two is the video show, which is still ongoing. Volume One was the original radio show that was broadcast on 96.1 FM here in Charleston from September 1989 to April 1990.

And if you’re keeping track at home, that means that I am currently producing Radio Free Charleston and The RFC MINI SHOW, which alternate weeks here in PopCult, and Radio Free Charleston: Volume Three, which will run at the Voices of Appalachia website. The shows will stream on schedule, and then be available for download (details still be worked out as I write this, but something will be in place by next week).

That’s in addition to the daily posts here in PopCult and my paying work. I look at how much stuff I’m producing at the moment and I’m just glad that I have the strength of ten men, for my heart is pure. 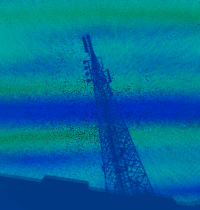 Anytime I write about something radio-related, I am obligated to post some variation of this graphic, even when it’s about an internet-based radio station.

Getting back to Radio Free Charleston: Volume Three, I recorded the first two episodes yesterday at WVSU EDC, and I am very happy with the results. It was my first time in a “radio” environment in a long, long time, but I was able to shake off the rust rather quickly and we came up with a couple of good hours of local music, with only a minimal amount of my inane blather.

I will be posting a complete playlist of the week’s show every Tuesday morning. Today I also get to announce a couple of changes that will start with episode three. First of all, beginning with the third show, Radio Free Charleston: Volume Three will expand to two hours each week. Starting with that week we will adopt a format of sorts. The first hour will be an eclectic mix of local (and regional) music. The second hour will offer up a theme of some sort. It might be a type of music (metal, folk, ska, punk, instrumental, etc.) or it might be centered around a single composer or it might be a “Radio Free Charleston Rock Family Tree.”

The possibilities are endless.

Beginning with episode three, I will be producing the show at Stately Radio Free Charleston Manor because it’s just easier all the way around and I can work on my PCs instead of trying to adapt to using Apple products, which I just find counter-intuitive. I had a blast working with Eric on the first two shows yesterday, but he can’t babysit me for every episode, and for me the MAC was like trying to drive a stick shift with one hand tied behind my back.

I also plan to include more bizarre short comedic non-sequitors, like we had on the original Radio Free Charleston, and as I digitize more of the ancient archives, I will include excerpts of the first incarnation of the show, when we had bands playing live in the studio, or folks coming in to contribute silly voices or other nonsense to the comedy bits. 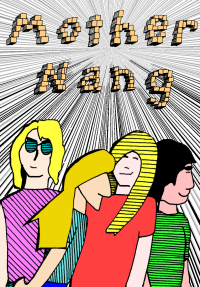 You will hear Mother Nang on the first episode of RFC: Volume Three, which gives me an excuse to run this old drawing I did for a flyer for the band in 1992

If you are wondering what type of music I’ll be playing on the show, I can promise you this–you’ll never know what you’ll hear on RFC. I strive for unpredictability. Our first show is basically a primer that explains the history of RFC. It begins with Hasil Adkins and ends with The Renfields. In between you’ll hear folk, alternative rock, heavy metal, ballads, straight-out rockers and classical music. I have license to play any music from an artist located in the Appalachian region, and while I’ve got a heavy dose of Charleston and Huntington-based musicians in my archives, I can also play artists from North Carolina, Pittsburgh, Memphis and anywhere else in this lumpy part of the country. I am now taking submissions of music from the entire Appalachian Region, so if you’re interested, get in touch with me at rudypan@suddenlink.net.

Our second show, running on November 18, is all about the wild variety of music that comes out of this region, and will feature music from Unknown Hinson, Pepper Fandango, dog Soldier, Hellblinki, Under Surveillance, HarraH and more. I’ll run the full details of the show that morning.

One of the cool things about working with Voices of Appalachia is that, every song I pull out of my archives will go into theirs. That means that, in the blocks of time between scheduled programming you may well hear music from the vast RFC library.

One PopCult housekeeping note: Since our updates on Radio Free Charleston: Volume Three will run every Tuesday morning, I will move the PopCult Toybox, either to Tuesday night or Wednesday morning.

So I hope you’ll tune in and give us a listen, and support the entire Voices of Appalachia line-up. We’ve got a diverse group of very creative people cooking up all sorts of really cool things that show off the region in a very positive light.

We’re going to slack off a bit and just run graphics this week, but we do want to alert you to a cool article Bill Lynch wrote this week about our friend Scotty Johnson and his mission to revive the Bowling Alley in Dunbar and add a live music venue to it. You can see the Bowling Alley–Dunbar in this week’s RFC MINI SHOW starring Ouralias. And our cameras will be on hand tonight for Travis Childers, starting at 9 PM with a five-dollar cover. 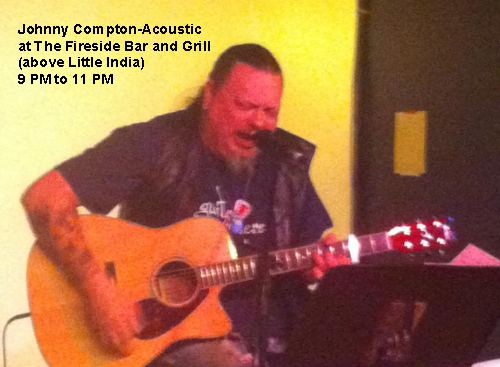 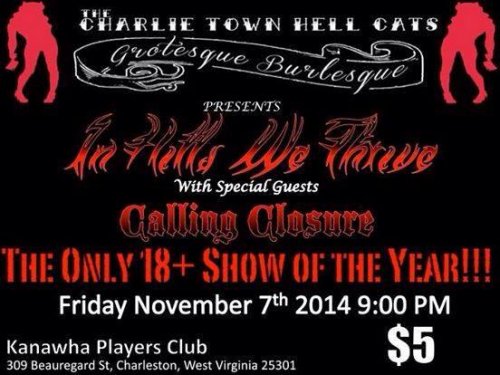 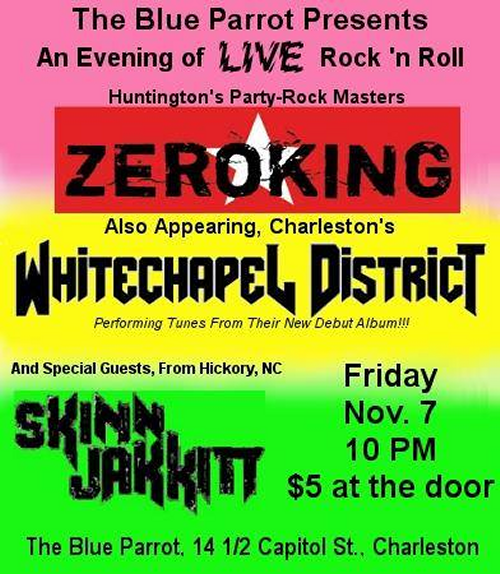 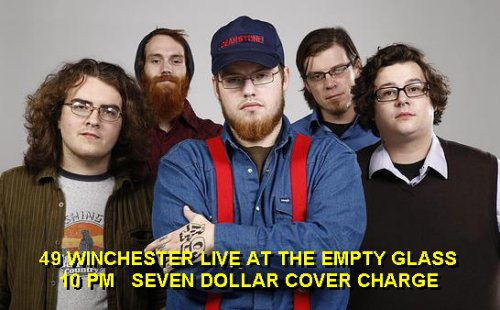 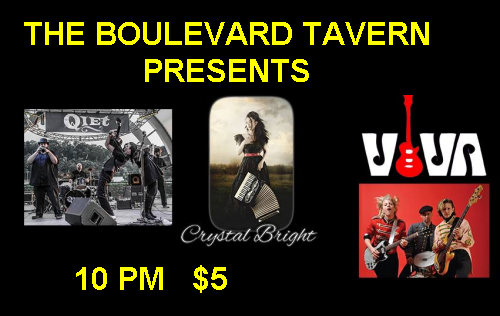 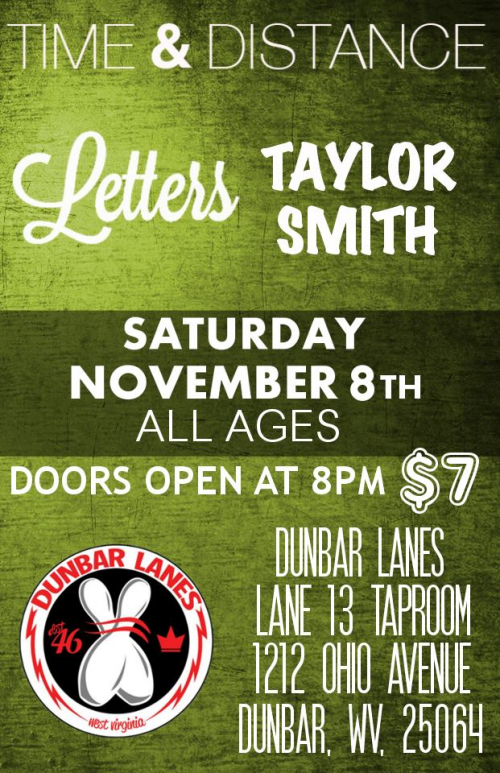 That’s it for this week. Remember to check back for our regular features, which are updated daily and aren’t just wire service stories or news that’s already been reported in the Arts section of The Gazette.