Some people don’t believe you when you say that one of the most important comic book stories published in the 1980’s was one issue of GI Joe: A Real American Hero, a toy-based comic book published by Marvel. While some critics look down their nose at this book because it’s based on a toy, it’s telling that thirty years after its publication, this book has finally been given the respect it deserves with this cool hardcover edition.

Larry Hama had been given the thankless task of developing the GI Joe comic book and creating the personalities and characters who would populate GI Joe’s 1980’s toy universe. Hama even wrote the file cards on the back of the packages. Yet he never seemed to get the recognition he deserved for being the creative force behind what was then one of Marvel’s top two selling titles, trailing only the X-Men. Happily, he is now recognized by GI Joe fans at collector’s conventions, and hailed as one of the top triple-threat writer-artist-editors to have ever worked in comics. 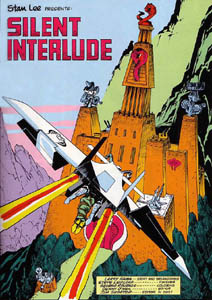 The Silent Interlude story is notable because it is told entirely without the use of dialogue or captions. Hama, who was primarily the writer for GI Joe, was allowed to show off his artistic chops by providing the layouts for this story that introduced the popular character Storm Shadow and focused on the GI Joe resident Ninja, Snake Eyes, and his rescue of Scarlett from a bizzare mountain fortress belonging to the terrorist organization Cobra.

Silent Interlude is a tour de force of pantomime storytelling. Without using dialogue or captions, Hama draws you into the story, moves the action along, introduces a major new character to the GI Joe pantheon, and establishes that new character’s connection to Snake Eyes. This is all done without words. That he accomplishes all this in twenty-two pages is astonishing. This is a marked contrast to many of today’s comics where characters will take a year and a half to cross town describing every step along the way with five hundred words crammed into a balloon.

In addition to the original Silent Interlude story, GI Joe: Silent Interlude 30th Anniversary Edition also includes Hama’s original rough pencil breakdowns so you can see how much or how little Steve Leialoha added to the art. Students of comic book art would do well to study these breakdowns so they could learn the basics of action comics storytelling. This remarkable story should be part of any college level class dedicated to graphic storytelling. 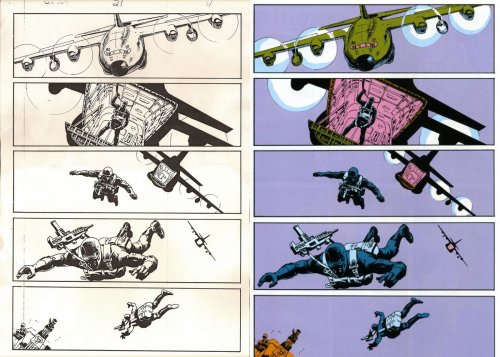 The breakdowns and finished pages are NOT side-by-side in the book, but you can still compare

Rounding out the collection is a story Hama wrote and laid out in 2010 for IDW’s GI Joe: Origins comic book #19. This is another silent story that again shows off Hama’s skill as a layout artist. But it also shows the weaknesses of modern comic book computer-assisted coloring. It’s not as simple or straightforward as the coloring of the original story and it muddies up the page design quite a bit. It’s still a skillfully produced silent story.

Another page of primo storytelling

The book also includes extensive notes by Mark Bellomo and Larry Hama. These give a tremendous amount of background, not only on the continuity leading up to these GI Joe stories, but also the behind the scenes issues that brought about this stand alone wordless masterpiece. GI Joe: Silent Interlude 30th Anniversary Edition is a vital addition to the library of not only fans of the GI Joe comic book, but people who appreciate excellent comic book art and have an appreciation for fine graphic storytelling.

It’s unfortunate that it’s taken thirty years for Hama’s work to be recognized as being as vital as it was. But it’s great that IDW has released this nifty hardcover collection.

Larry Hama at JoeLanta in 2013. He will be back as a guest again next March