RFC Audio Flashback: The Supergroup of Beckner, Price and Panucci 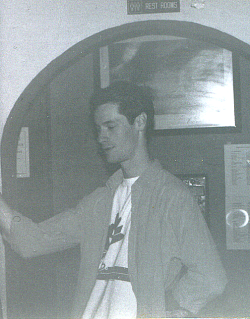 Today, I’m going to inflict upon you some of the most gloriously inept drumming ever caught on tape. Let me explain. We’re still in that fateful week in March 1990. If you’ve been following the story so far in our audio clips, you know that Brian Young, then the drummer for Three Bodies, was in Key West Florida falling asleep in the sun and getting his face half burned off. On Thursday of that week, he and Kris Cormandy called in and performed a song live on the Radio Free Charleston preview show I did at 11:35 p.m. each night. You heard that clip on Monday.

There is a clear domino effect going on here. You see, Brian was also the drummer for The Hepcats, the all-star house band for the Tuesday Night Jam Sessions at the Legendary Charleston Playhouse, my old stomping grounds and the most-favored venue of the radio version of Radio Free Charleston.

The Tuesday night Jam Session was a weekly epic of open-mic madness. Bands would come out and do a few tunes, but they’d also intermingle. New collaborations took place. Insane moments happened there that people still talk about, like Michael Friedman’s punk rendition of “Me And Bobby McGee,” and the formation of the Charleston Playhouse Quartet, who perform the theme song for Radio Free Charleston. That theme song was recorded on stage at the Playhouse, improvised live, and you’ll hear it in its original form on Friday.

As I mentioned, the Jam Session was hosted by a band called “The Hepcats.” The Hepcats were a loose conglomeration of members of other bands, most of them regulars on RFC. On most weeks, Brian Young, from the aforementioned Three Bodies, was the drummer. Gary Price, of the Swivel Rockers (later shortened to “The Swivels”) was the regular bass player. The guitar spot rotated. Some weeks it would be Price’s fellow Swivel John Radcliff, while other weeks it would be Go Van Gogh’s Stephen Beckner (You can see Stephen  above). Occasionally John “Sham Voodoo” Estep, Alan Griffith, or Third Body Kris Cormandy would hold down the guitar slot.

But Brian was not in the state on the night this recording was made. Stephen Beckner had just written a new song, “Got Drunk, Got Married, Got Screwed,” and wanted to debut it with The Hepcats that night. Only — there was no drummer. There was a drum kit on stage. I think it was Brian’s, in fact, but there wasn’t a qualified drummer in the building. I was sort of emceeing the evening, so I was onstage with the band when Gary Price jokingly suggested that I get behind the kit and start playing.

I had never sat down behind a drum kit before. I didn’t know a paradiddle from a rim shot, but I put my performance-anxiety issues aside. (I still have ’em, by the way, come out to the La Belle on Saturday and see for yourself.) I took a running leap at keeping the beat. You can sample the results yourself.

It’s a great song, strong enough to overcome the lousy drumming. Later, when Stephen performed the song with Go Van Gogh, I got to hear how the drums were supposed to sound. I played it sort of like Keith Moon falling down a flight of stairs in a drum kit. Tapes were rolling, and the results aired on RFC the following Saturday night. It’s still not clear if it was egotisical of me to air my own horrible drumming, or if I was being humble by proving how bad I could be at something. You be the judge.

I was so bad up there that halfway through the song, when I finally remembered to hit the cymbals, you can hear the crowd cheering for me. It was like the cheering at a Special Olympics event. Luckily, after one song, Tommy Medvick showed up and took over. Tommy was the ace drummer for the Swivels (you can see him as part of The Feast Of Stephen in episode 23 of RFC). A clip from that show closes the Radio Free Charleston retrospective Saturday night.

Which is, I guess, how sharing this killer song, with really sloppy drumming, will convince you to come out to the La Belle this weekend, even if it’s still snowing. You really ought to come out to hear me not drum. Tomorrow check back for audio clips of The Swivels and some lady friends cavorting and fighting in the studio during that same epic broadcast.