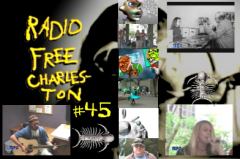 From June, 2008 we have Radio Free Charleston’s forty-fifth episode, “Hot Wheels Shirt.” This show promoted the then-upcoming Derek Kirk Memorial Stage Show at Davis Park in Charleston.  We featured Doctor Senator, performing at said park, and we had a touching song by T.J. King, about his friend, the late Derick Kirk.  We even shot the host segments around the park.

In addition to that, we had a movie trailer for an indie film out of Huntington, “The Comic Book Lady,” which starred Kathleen Jackson and featured cameos from Harvey Pekar, Genuine Nerd Toby Radloff, and Kitten Natividad.  Plus we offered up animation from Frank Panucci.  It’s all wrapped up in a tight little 16-minute package, for your viewing enjoyment.