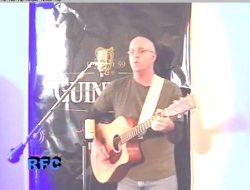 From March 2007, This episode is called “A Place Of Solace Shirt” in honor of the Huntington band who didn’t appear on RFC until many years later. Our musical guests on this episode are John Radcliff and Al Carey.

Radcliff is an old buddy from way back in my radio days, and Al was unknown to us, but submitted a music video with a striking, but dated and ham-handed political commentary. Rad sings the very XTC-like “Rainbows,” while Al provides us with a song which, in the intervening years, has pretty much lost any relevance that it had at the time.

Also in this show is animation by Stephen Beckner, a short film by Frank Panucci and a vintage Major Matt Mason toy commercial. Read the original production notes here.