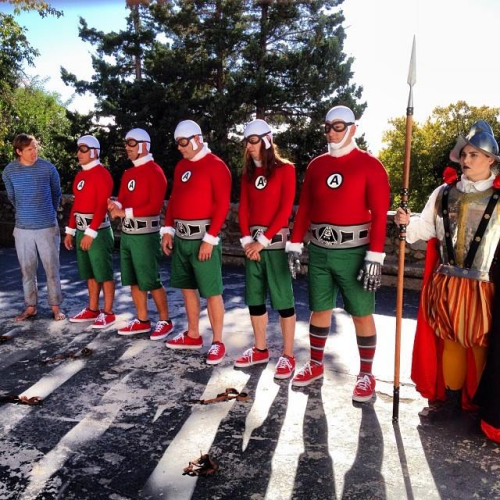 Saturday at 1 PM (10 AM Pacific Time) and Sunday at 12:30 PM, on The HUB, The Aquabats go on a Christmas Adventure. They will follow this with two more special episodes airing in the following month.  First we have “Christmas with The Aquabats!.”

Ricky’s perfect Christmas is threatened when the Aquabats arrive in a strange village and are convicted of breaking a law that forbids any Yuletide celebration. Their only chance at saving themselves and Christmas is for the big man himself, Santa, to lend a mitten! The special includes guest stars Matt Walsh (“Veep,” “Upright Citizen’s Brigade”) as Santa and Robert Smigel (“TV Funhouse,” “Triumph the Insult Comic Dog”) as the voice of The Krampus.

Next week, “Shark Fighter!,” finds the Aquabats face-to-face with mutant land sharks and when the legendary Shark Fighter (Rhys Darby, “Flight of the Concords”) arises to take on the Bats, he ends up being the big brother Crash has always wanted. On January 19, “Kitty Litter!,” the Aquabats encounter a new villain who blames them for his villainous condition and devises a plot for revenge that uses the cuteness of kittens to battle his enemies.

The Aquabats Super Show is the coolest thing on TV, and it’s a real Christmas treat to have new episodes.