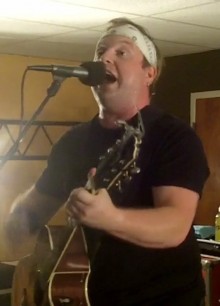 Sheldon at The Cartref

West Virginia’s Punk Troubador, Sheldon Vance, makes his second appearance on The RFC MINI SHOW, this time performing at two locations, The Empty Glass and The Cartref. You’ll hear his songs, “Strength To Let It Go,” “Turn It Back Around” and “Play On.”

This is the first RFC MINI SHOW to feature a performer captured in two different venues, and I think the transition is a lot of fun. Sheldon is preparing to tour Philly and New York later this month, and in honor of the trip he’s recorded a NEW EP, “Northbound,” and he’s selling it to raise funds to help cover travel. It’s got 4 new tracks of Raw, Energetic, Sing-a-long Appalachian Acoustic Punk! You can snag a download for just three bucks HERE.

Sheldon will host the AfterShock Party at The Blue Parrot, following ShockaCon on September 18 and 18, 2015.Both nights will be filled with amazing Horror Punk bands from all over the country–all blasting frighteningly loud music starting at 10 PM each night.