The 2012 PopCult Gift Guide Day One: The Beatles 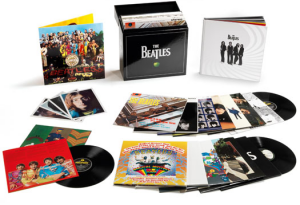 We’re kicking off our 8th Annual PopCult Gift Guide today and we’re doing it with The Beatles. This year, there’s one huge gift that the die-hard Beatle fan will definitely want. It’s The Beatles complete box set of studio recordings on vinyl.

This is the vinyl debut of the digitally remastered versions of The Beatles albums which were released on CD and on iTunes just a couple of years ago. Even if you have the original vinyl, you should be able to detect subtle differences in these new pressings. All the albums are restored to their original packaging, which includes the inserts with the “Sgt. Pepper” album, the posters and photos with “The White Album,” and the twenty-four page storybook that came with “Magical Mystery Tour.”

This is not for the faint of heart. List price is around five hundred dollars. You can find it online for a little more than three hundred at places like Amazon. However, if you buy locally, they may cut you a break. Still, at that hefty price this box, which includes fifteen discs plus an illustrated book, it’ll be easier to buy if “baby, you’re a rich man.”

If you do not want to be so extravagant in your gift-giving, you have the option of buying the albums individually at prices starting around twenty dollars for a single album or thirty for the double albums. This set also marks the vinyl debut of the “Past Masters” double album, which includes all the singles and stray tracks that were not included on the original British album releases.

Other options if the Beatles fan in your life already owns multiple copies of the entire Beatles catalog would be the newly remastered Blu-Ray (and DVD) releases of  “Magical Mystery Tour.” “Magical Mystery Tour” is notable for having a stunningly clean print for the first time ever (most people have seen transfers from a 16mm print which was copied off the original British 35mm print, and was beat all to hell.) “Magical Mystery Tour” also includes extras such as deleted scenes and interviews with cast members which are equal to the length of the original film. It’s still basically an incomprehensible jumble of prehistoric music videos strung together with amateur comedy bits, but it’s still The Beatles. You can get just the movie on Blu Ray, or youcan spring for a deluxe boxed set, complete with Blu Ray and DVD versions of the film, plus a 60 page book and a reproduction of the original double-EP set with the storybook.  The boxed set is around ninety bucks, while the Blu Ray is a mere twenty. 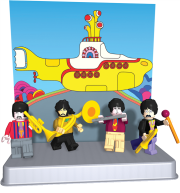 If it’s a real completist that you’re buying for, for a mere ten bucks you can find the just-released “Yellow Submarine” Knex figures at Target in the Mega Blocks aisle. These are cute little two inch high representations of the cartoon Beatles from “Yellow Submarine.” Also available as KISS figures, if your giftee is so incline.

Check PopCult every weekday for the next two or three weeks for more entries in our gift guide.