Radio Free Charleston 175, “Dunbar Lanes Shirt,” is a sampler of just a tiny amount of the great local music that we brought you in 2012. We’ll revisit songs from Red Audio, In The Company of Wolves, Godmode Broadway, and The Charleston Light Opera Guild production of “The Color Purple.” 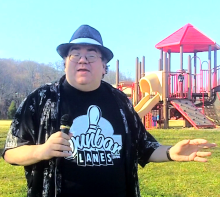 Our title shirt this week comes to us from the newly reopened Dunbar Lanes, the area’s coziest little bowling alley, tucked away in the heart of the hub of the Kanawha Valley, Dunbar. After the previous owners retired and left for Florida and the bowling alley lay dormant for a few months, the Dunbar landmark reopened last Friday and the new management promises to turn it into the hippest bowling alley in the state.

Host segments were shot at Joplin Park in South Charleston early Sunday morning before the gloomy clouds and rain blew through.

We decided to do something with this episode that we haven’t done since our very first year, and that’s take a quick look back at some of the memorable performances that we’ve been lucky enough to have on our show.

First up, we have Red Audio from Summersville, whom we recorded during FestivALL at the Smoke On The Water Chilli Cook-off at Haddad Riverfront Park. For this video, we used live footage of the band and combined it with a studio recording of their song, “Girl From Outer Space.” These guys were so tight that it took very little editing to make it work.

In The Company Of Wolves, from Hurricane, has been one of the fastest rising bands in recent memory. We’ve had them on the show a few times this year, first recorded at Kanawha Players Theater, then later at the St. Albans City Park Ampitheater during Tribute To The Troops II. For this episode of RFC, we’re bringing you a recording of the band from Tribute To The Troops, performing the song that we recorded them doing at Kanawha Players Theater. This performance has not actually been on Radio Free Charleston this year, but we used it as a teaser for the three part Tribute To The Troops II special and thought it was deserving of a special encore. Special thanks go out to Dave McClenahan for the amazing audio mix on this song.

Back in the spring, we had the great pleasure of being invited to Godmode Broadway’s rehearsal space to hear them before they played an official show. We went back to shoot a futuristic surveillance style music video and the result is the video for “Surfboards and Broadswords.” Since they debuted on Radio Free Charleston, this genre defying progressive metal unit has become one of the area’s hottest live bands. 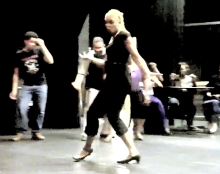 We wrap up the show with a number from The Charleston Light Opera Guild production of “The Color Purple.” “Push Da Button” is a showstopper featuring Nakeila Killing as Shug Avery, the juke joint singer who steals the heart of Celie, along with several other members of the cast. This amazing production was the first community theatre production of the musical “The Color Purple.” We were privileged to be invited to record a rehearsal without the benefit of the full orchestra. We were still treated to a stunning performance that was only topped a couple of weeks later when we witnessed the full production onstage at the Charleston Civic Center Little Theater.

That’s the story behind this episode, our 2012 sampler. Our next show, the Radio Free Charleston Christmas special, will magically appear under your Internet tree sometime before the actual holiday and will be the last Radio Free Charleston of 2012. Don’t worry though–we’re already making plans for next year’s shows.