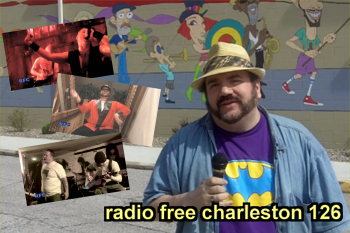 From April, 2011, we bring you Radio Free Charleston 126, “Purple Batman shirt.” This episode featured music from WhiteChapel District, the duo of Chad Foss and Sean Sydnor, and a trailer for “Zombie Babies,” Eamon Hardiman’s legendary motion picture. This was our first show uploaded in Hi-Def, which seemed like a big deal at the time.

Host segments were shot on a beautiful Sunday morning in front of Jeff Pierson’s East End mural, which can be found right across Greenbrier Street, on the back of the Mini Mart. Our first musical guest for this show was WhiteChapel District. recorded on New Year’s Eve, at Tomahawk’s Smokehouse and Saloon, which spent a few years as Grumpys, and is now Mountain Pie’s on The River or something. It was a wild, high-energy night. These guys open and close the show.

Next up we had a trailer for Eamon Hardiman’s movie, “Zombie Babies.” This touching family drama told all about about what happens when a zombie infestation happens at a discount abortion clinic.

The musical guest sandwiched between the two WCD songs was the duo of Chad Foss and Sean Sydnor. Sean was on the show way back in our early days as a member of Professor Mike and has since gone on to fame as the bassist for Byzantine. Chad needs to be singing again.