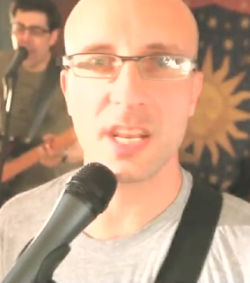 Up top, direct from the last day of May 2011, you see episode 131 of Radio Free Charleston. “Thenewno2 Shirt”  was a special episode of RFC that was devoted to promoting a great triple bill of live, original music held on Saturday, June 4 of that year featuring local favorites Tofujitsu and Mother Nang and Washington DC’s, Wiley Sonic.

Wiley Sonic was the then-new band fronted by Joe Vallina (right), who has a long history with Radio Free Charleston, having appeared as the one of the first in-studio guests on the radio version of RFC back in 1989.  Back then, Joe was half of the punk duo Blind Blue Leper Society.  The other half of that duo was local bartending and jam band legend, Washboard Dave.  More recently I’ve played tracks from Joe’s current band, The Heavy Editors, on the RFC radio show on The AIR.

Joe provided the music video for Wiley Sonic, and we had video in our archives of then-recent performances by Mother Nang (recorded at The Blue Parrot) and Tofujitsu (live at The Empty Glass). Animation is by Frank Panuci with music by yours truly. Host segments were recorded at the Grove City Outlet Mall, about an hour North of Pittsburgh for reasons I have totally forgotten. The show’s namesake shirt featured the band, thenewno2, which was the musical vehicle being used by Dhani Harrison. Dhani was an early supporter of RFC back in the MySpace days. And for some reason, there are planets running alongside the credits in this episode.