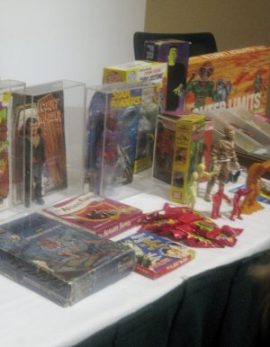 In just three days ToyLanta happens again at the Marriot Century Center in Atlanta, Georgia. I’ll be there along with Mrs. PopCulteer and we’ll be shooting video of the cool stuff going on and some of the panels. To remind you how cool this show is, we’re going to bring you some of last year’s panels all week long.

The Monster Squad talks all about their favorite monster-based toys and games, touching on AHI monsters and other permutations of the classic Universal Monsters, plus Aurora model kits, toys based on The Outer Limits, The Mummy, The Addams Family and more. Listen in as the guys discuss classic monster themes in action figures, playsets, boardgames, model kits and Halloween costumes.

ToyLanta begins this Friday in Atlanta, Georgia. It’s not too late to make plans to attend.

Visit ToyLanta for early details on how you can be part of the coolest toy show in the South. You can also check out the Facebook page .