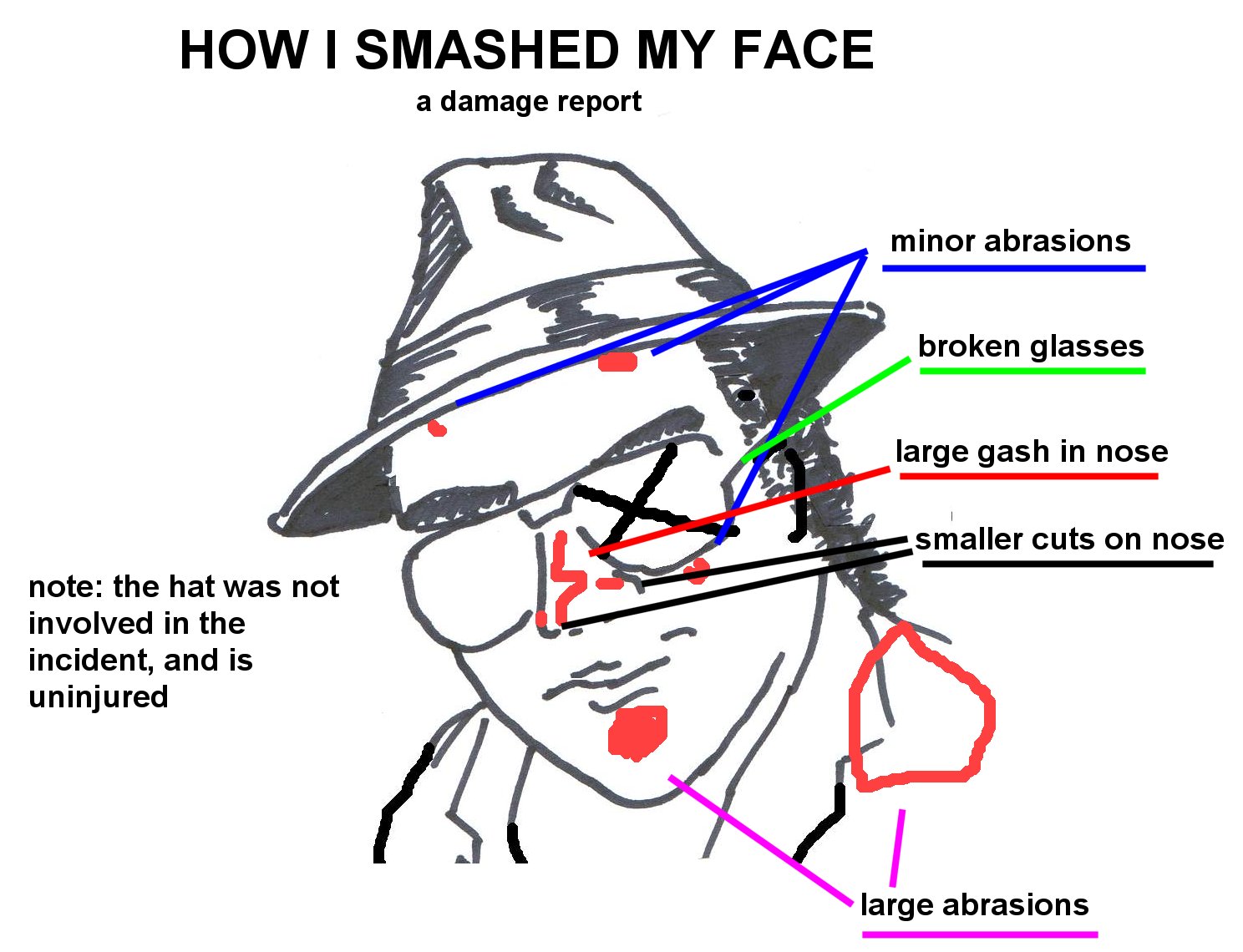 I now have one grand piece of advice that I can share with the world: If you must fall face-first, taking the full brunt of an impact on your visage, try not to do it in a gravel alleyway.

Saturday afternoon I was preparing for a visit from my sister and her kids, and took out the trash. Nothing unusual there. I noticed that, due either to a sloppy garbageman, strong winds, or a particularly muscular neighborhood rabbit, the garbage cans belonging to my neighbor across the alley were in my yard. I decided to be a good Samaritan and took his cans back to his yard. But I forgot about the old fencepost a car sheared off about 30 years ago that sticks up about three inches at the end of my yard. Beyond the yard lay the alleyway, in all its gravelly glory.

I don’t fall a lot. and I’ve never fallen and hurt myself. There’s a first time for everything. I had one empty garbage can in each hand, and didn’t let go of them. They acted like parachutes, catching the wind and pulling my arms back, so that the first part of my body to make contact with the ground was my face. (Actually my shoulder and face, but my face was the part that really counts here.)

Time slowed down, just like in the movies and in overly-dramatic first-hand accounts of stuff. As soon as I started falling, I realized that I’d tripped on the old fencepost. Then I thought, “This is going to hurt, but I’ll stop falling soon.” Only, I didn’t. I remember thinking, “Why aren’t my hands going in front of my face?” Then as the ground approached, I thought, “Something’s wrong here.”

So I went face first into the gravel. Once I stopped falling, I thought, “That wasn’t so bad.” Then I lifted my head, opened my eyes, and saw my glasses. And then I saw the rest of them. One lens had popped out, and the frame was smashed flat. It was at this point I realized that blood was pouring out of my face. The face is the second worst part of your body that you can have blood pouring out of. So I gathered up my glasses, returned my neighbor’s trash cans, and made my way to my house. I can see fairly well without my glasses, and it was clear that I wouldn’t be wearing them until I got the bleeding stopped. When I looked in my bathroom mirror, I was in for a surprise. My nose was split open, with an “S” shaped scar running right up the middle. It looked like I pissed off Zorro or something. (Actually, I looked like IWA wrestler Necrobutcher after one of his typical matches. I was wearing the “Crimson Mask.”)

Hurt like hell, too. So I cleaned myself up, loaded up a towel with ice, and called my brother. “Hey Frank, I just smashed my face open in the alley. I might need some help.” Then, I recalled my sister was on her way from Pittsburgh with the kids. Funny Uncle Rudy’s going to be a bloody mess. That’ll make the kids happy! She called with a progress report as they were passing through Fairmont. “Tell the kids Uncle Rudy has a boo-boo on his face. Lots of them!” While I was on the phone, my brother Frank came in.

Frank is the man to ask about falling. He’s been falling, walking into things and generally maiming himself for 35 years, ever since the infamous “glass door at Angela’s Pizza” incident. Frank has dozens of stories that start with, “Everything was covered with ice…” So I took his word on the facial damage I’d inflicted on myself– no plastic surgery needed. I may have a scar on my nose, but it’s not going to be prominent. Even if it is, I’ll just look like a Bond villain…..”Rudy Scarnose!”

Everything else will heal up fine–the eyebrow gash, the chin scrape, the two nose gashes. I think I know how Rocky Marciano felt after his second fight with Ezzard Charles. The only difference is that I didn’t come back to knock out the alley.

So when little Gina and Gino (the Ginoids, as we call them) showed up, it took a few moments for them to get used to seeing Uncle Rudy look like he was made up for Halloween. Luckily, I had Hot Wheels track, so they got over it real quick. And so did I. There’s nothing quite like playing Hot Wheels with a three-year-old to make you forget that you almost left your nose out behind the house.

Sunday morning I woke up, and to be honest, I didn’t feel that bad. My face is still a mess, but heck, that’ll just let me fit in with the IWA guys Tuesday night! I now know what it feels like to be busted open “hardway.” I figured I’d write up my story of smashing my face open, not because it’s really pop culture or anything, but at the very least, the guys over at WHCP will find it amusing. But I would like to not hear any more jokes about this happening because I was drinking. I am a notorious non-drinker. I’ve probably consumed less than three ounces of alcoholic beverages my whole life. I’d hate for anyone to think that I had to resort to artificial means to achieve an act of stupidity this monumental. The whole point of this self-indulgent post is that I’ll probably be posting a bit less this week. I’ll do a quick run-down of the IWA show on Wednesday, and Mel and I have an “Animated Discussions” on deck, but I have to take some time to get my glasses fixed and heal up a bit. Below you see the “towel of Turin” that I got to keep as a souvineer of my clumsiness. 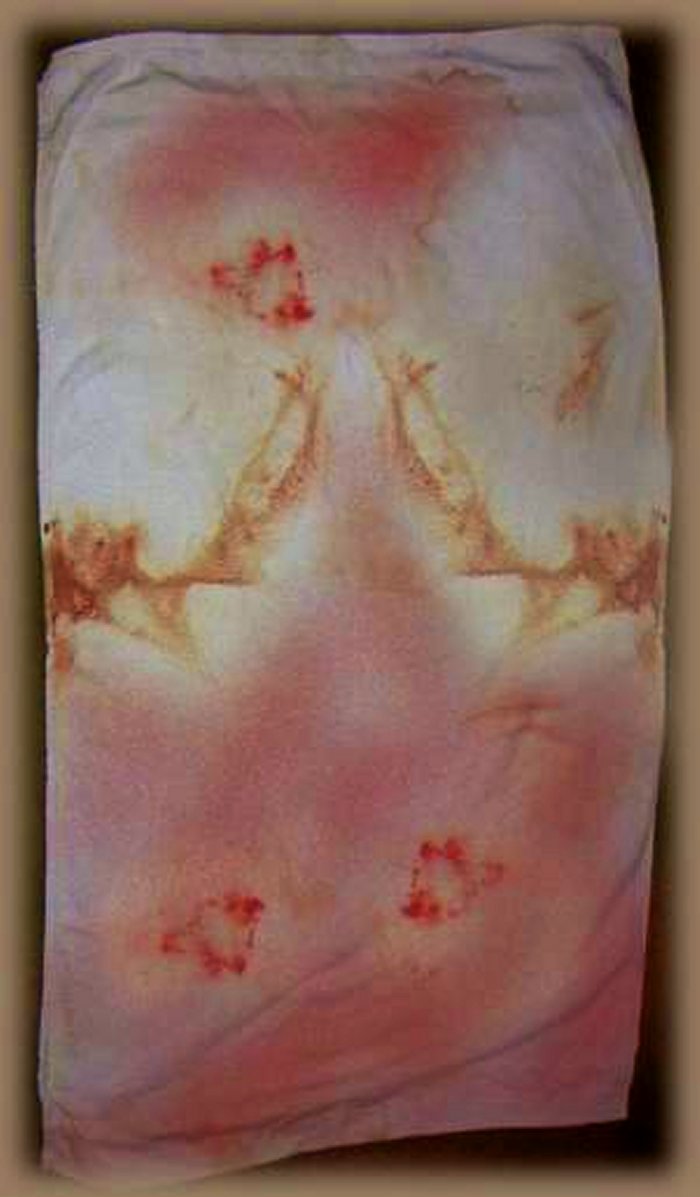 To make up for it, I’ll give you an Art Blog on Friday—“A Starry Night Over The South Side Bridge.” Things will be back to normal next week, barring any more face-smashing incidents.