Living In The Age Of Absurdity

The late 1960s was “The Age Of Aquarius.” The 1980s were “The Me Decade,” Now it’s become clear. We are living in the Age of Absurdity. I think that this is direct result of the subversive humor of the 1970s filtering into the mainstream. Our world today seems to have been shaped by two major influences….Monty Python’s Flying Circus and The National Lampoon. Don’t get me wrong. The Pythons and Lampoon shaped my sensibilities and I have fond memories of them. Unfortunately, I am not alone.

We are paying the price for the sharp, cynical despair of counter-culture comedy finding its way into the mainstream. Not only has it made the original comedy a little less enjoyable, but it’s placed sharpened objects of comedy into the hands of people who lack the wit and ethics to wield them properly. There is still a lot of great cutting-edge humor out there–more than ever, in fact–but there’s also a lot of comedy out there that uses the tools of shock comedy without any concern for what it can do to their audience. The whole point of using shock in the 60s and 70s was to open the minds of the audience and try to change attitudes. Now there are comedians who simply use shock to get cheap attention from stupid people.

The entire culture has become saturated with what would have once been considered “shock humor.” A few months ago, on an Adult Swim cartoon called “Squidbillies,” there was a gag about the lead character buying a pair of “Truck Nuts,” a set of plastic, droopy testicles which you hang under the back bumper of your truck to prove how manly your truck is.

I thought it was a brilliant parody of how moronic and crude redneck culture has become.

Then I found out that they’re real. One of my neighbors has a set hanging off of his truck.

Somehow, it made the joke less funny. Instead of a brilliantly absurd parody, it was merely observational humor.

It made me think how, when I was growing up, The National Lampoon and Monty Python were so cool because hardly anybody else got the humor. You had to be a hip insider to actually understand the jokes. It was funnier because the appeal was not universal. The material was so shocking and outrageous that it offended the sensibilities of the average person. This was special humor for me and a select few special friends who really knew what the score was, and how to laugh at it. We were elite comedy snobs, and that made us special.

The only problem is, we weren’t quite as special as we thought. There were millions of people like us all over the country. Once the counter-culture of the 60s, which included “underground” comedy, became mainstream, everybody wanted in on the fun. By the time Saturday Night Live made it all the way across the country, and The Lampoon movies became hits, everybody was in on the joke.

That’s when the desensitization began. People aren’t fazed by the outrageous any longer. This, coupled by the immediacy of the Internet and the deconstruction of mass media models has lead us to a place where shocking idiocy is no longer mocked or scorned, but instead is celebrated. You got a smokin’ baby? Put him on YouTube! Fat guys embarrasing themselves? Put it on YouTube and sell a shirt based on the clip in Hot Topic.

We have brought sophisticated, edgy, Lenny Bruce-type shock values to lowest-common-denominator humor. A pie in the face has been replaced with oversized plastic genitals bonking someone on the head.

People don’t laugh for the same reason now that they did then. Back then, if a comedian threw out a racist or homophobic crack, it was because they were making fun of how absurd it was that anyone felt that way. Now when a comedian makes a

racist or homophobic remark, it’s because he’s pandering to a racist, homophobic audience (I’m looking your way, Larry the Cable Guy). The shock now is not over how horrible it is that anyone feels that way. The shock today is that someone will stand up and say the ugly things that much of his audience agrees with.

Somebody let the morons in the room, and they’re laughing for the wrong reasons. It was so much better when shock comedy was offensive to the common man. Truck Nuts was hysterical when I thought it was just a joke about how stupid people could be. When it became real it was just sad. 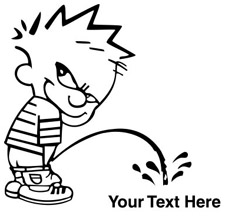 Now the average Joe thinks nothing of putting a decal on his car that shows a cartoon character peeing on something he doesn’t like. College elders look on and smile as students scream “Beat the s**t out of Pitt!” A sportswriter based near the location where an girl was held captive for 18 years writes a column about all the cool sporting events she missed while she was held in isolation. A disgraced lawyer (who probably shouldn’t even be allowed to practice any longer) attempts to win freedom for his accused rapist client by calling the victims “tramps” and “whores.” It’s possible to get famous simply by cramming as many fertilized eggs up you womb as possible.

You can’t make fun of this stuff…..it’s already too absurd.

Back then, bigots were the butt of the jokes. Now they’re the target audience. That takes the fun out of it for people with warped minds like mine.
If you go back and look at the fake news section of 1970s issues of The National Lampoon, you can’t help but be struck by how tame they seem when compared to the real news today. I can’t imagine any harder job than creating material for The Onion. It’s got be daunting to stay ahead of the idiot curve. It’s permeated politics, as well. Look at the idiocy we’ve endured this summer. On the Far Right we have slick practitioners of Nietzsche’s “Big Lie,” who have managed to obfuscate the issues and redirect the debate away from serious discussion into outright silliness and idiocy. If you’ve ever tried to discuss health care with any of the pre-programmed Obama-haters, you know that it makes you feel like Michael Palin in the Argument Clinic sketch. There’s no substance there, just empty sloganeering and shocking catch phrases like “Death Panels” and “Pulling the plug on Grandma.” Those town hall meetings looked like Andy Kaufmann’s wet dream. It’s not just political theater, it’s political theater of the absurd. Now we have some idiot Congressman yelling at the President during a joint session, and the idiot squad is rallying around him.

Who can listen to a Sarah Palin speech and not think that she’s a refugee from Monty Python’s “Very Silly Party,” perhaps as a running mate for Jethro Q. Walrustitty. That woman makes Dan Quayle sound like William Jennings Bryant.

Part of this is because of the cynicism bred by the comedy of the cutting edge has spawned a generation of political operatives who will do anything to win, rather than do what is best for the country. It goes back to Lee

Atwater, the late Republican operative who ran the political campaign of George H.W. Bush with all the subtlety and ethics of the Delta House’s assault on the Founder’s Day parade in the movie “National Lampoon’s Animal House.” His disciple, Karl Rove, continued with this method of bending the truth and diverting meaningful dialog into hysteria to get his charge, young George W. Bush, swept into office.

I wonder if the editors and writers of The National Lampoon would have been as forthcoming with their “bad boy” comedy if they knew that young Republicans were reading. Well, P.J. O’Rourke probably knew. Michael O’Donahue is probably turning over in his urn.

Of course, the problem isn’t that we live in an absurd world. The problem is trying to figure out what, if anything, can be done about the stupefying of America. Is it cyclical? Can we just wait for the silliness to die off? Are we doomed to a world like that in the movie “Idiocracy?” Can humor ever be subversive again, or is the dirty joke genie out of the bottle?

My take is that our situation validates the theories of another subversive creative force that sprung up in the 1970s. Look at the progression of anti-intellectualism from Nixon to Reagan to Quayle to W. Bush and now to Sarah Palin. Look at how car decorations have gone from peace symbols to “Baby On Board” signs to peeing Calvins and now to Truck Nuts. We live in an age where people will go out and buy a computer–one that has more computing power in it than every computer in the world had when we went to the moon–and use it to watch

DEVO was right. We’re devolving. Society is winding down. We can’t get much stupider than this.

Moving back to Friday this week, our cool comic is Marvel’s “Strange Tales.” While this is basically Marvel’s take on what DC did with “Bizarro Comics” a few years ago, it’s still a kick. This three-issue series is centered around Peter Bagge’s “Incredible Hulk” comic, which was pulled from Marvel’s schedule a couple of years ago. Filling out this series, which dices up Bagge’s Hulk story into bit-sized pieces, are offbeat tales of the Marvel universe by such unexpected talents as Paul Pope,Max Cannon, Jacob Chabot , Jonathan Hickman, R. Kikuo Johnson, Matt Kindt, Michael Kupperman, Tony Millionaire and Jim Rugg

This is your chance to see what happens when some of the most out-of-the-mainstream cartoonists get to run wild with the Marvel characters.

Win A Guitar On RFC!

The First Great Guitar Giveaway from Radio Free Charleston and Route 60 Music, is still going on. You can enter until midnight, September 30. Watch the show to find out how to enter (it’s really easy)!

Sunday we’ll bring you some video, Monday we’ll bring you some art, and Tuesday you can expect Radio Free Charleston’s second Beatles tribute, featuring music from Rubber Soul, Captain Crash and The Beauty Queen and Under The Radar. Being in full-tilt Beatlemania mode, we’re gearing up for Rubber Soul’s special concert at The WVSU Capitol Center Theater on Saturday, September 19, where they’ll play all of The Beatles’ number one hits!