Okay, I know I’m probably the last person in the blogosphere to chime in on this, but here’s my take on the whole Sarah Palin/David Letterman dust-up. Palin over-reacted, exaggerated, blew the entire situation out of proportion, and then milked it for more publicity than it deserved. In the process, she put on display the one key flaw of the current modus operandi of the purveyors of Right-Wing Politics.

She firmly believes that two wrongs make a right.

Let’s recap: Letterman made a joke about Sarah Palin and her daughter taking in a Yankees game. He said that, during the seventh-inning stretch of the ball game, Yankee’s third baseman Alex Rodriguez had “knocked up” Palin’s daughter. It wasn’t a stellar joke, but it was far tamer than many jokes that Jay Leno and Conan O’Brien have made about Palin’s daughter before. The joke was predicated on Rodriguez’ reputation for promiscuity, and the fact that Palin’s daughter had a child out of wedlock before she was old enough to vote.

A couple of days later, Palin and her husband released statements blasting Letterman for “joking about the rape” of their daughter, which he hadn’t, and going on to suggest that Letterman was a pedophile, around whom their 14-year-old daughter wouldn’t be “safe.”

The Palins seem to hang their shock and outrage on the idea that Letterman was making the joke about Palin’s 14-year-old daughter, whom nobody cares about, instead of their 18-year-old, the most notorious unwed mother this side of Octo-mom.

It was clear to anyone with half a brain that Letterman was joking about the 18-year-old, but Palin’s target audience apparently doesn’t have half a brain. It was also clear that Palin was retaliating with an even-more outrageous accusation against Letterman in order to play the victim and whip the wingnuts into a frenzy.

Two wrongs do not make a right. If Letterman’s remarks were out of line, then so are Palin’s. Letterman offered a sincere apology on Monday. Palin, if she had any class, would have done the same. Instead she issued a half-assed acceptance that veered off the rails into a totally irrelevant “support the troops” message.

Let’s examine the facts here. So far, Sarah Palin has yet to raise a daughter who’s managed to reach the age of 18 without getting pregnant. She’s made it a point to drag her children out to use as props for photo ops on stage at the Republican convention, and at her public appearances. This opens her up for ridicule, and puts her children in the public eye. It was her decision to this.
Letterman, on the other hand, has never been accused of, or shown any proclivity toward, the perversions to which Palin alluded.

Not only were Palin’s remarks unwarranted, but as a joke, they don’t make any sense. They were simply mean-spirited gainsaying.

When Matt Lauer confronted Palin over her comments about Letterman, she employed exactly the same kind of double-talk and back-peddling that she was complaining about Letterman using when he gave his first apology.

Letterman’s first apology was tongue-in-cheek, because, like most Americans, he saw the pure absurdity of Palin’s histrionic reaction. Rather than graciously accept the apology and use it as the chance to go on his show and apologize, like her former running mate, John McCain did, Palin changed the subject and demanded that Letterman apologize to “all young women” for continuing their sexual exploitation at the hands of older men.

Palin is now trying to be a champion for women and young girls, standing up against their exploitation at the hands of those dirty old liberals.

I hope you brought your hypocrisy-wading boots. Palin has sent her oldest daughter, the one who is an unwed mother, on an “Abstinence Tour.” That, in and of itself, is comedy gold. However, this tour, featuring one of Palin’s young daughters–you know, the ones who need to be protected from exploitation–is sponsored by Candies.

Yet, Letterman is the pervert. Right.

This whole sorry episode lays bare the Right Wing’s dominant strategy of the last 50 years. They believe that two wrongs make a right. If they perceive an injustice, no matter how irrational it may seem to an objective observer, they feel it’s perfectly all right to “correct” it in any manner they wish, regardless of whether or not their corrective action is just, moral, ethical, or even remotely sane.

It doesn’t seem to matter to them that their hypocrisy destroys any credibility they may have.

They learned nothing from Richard Nixon, who felt justified employing “Dirty Tricks” because he felt that he’d lost to Kennedy due to underhanded tactics. Even though Nixon had to resign in disgrace because of his paranoid attempts at “righting a wrong with a wrong,” there were still high-ranking Republican operatives who believed that being on the right didn’t mean they should always do what is right. There is a twisted “ends justify the means” mentality at work there that is, in the end, harmful to Democracy. 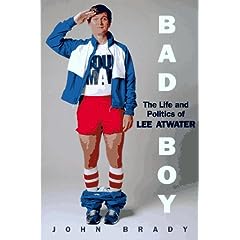 So our nation has suffered through Lee Atwater’s style of attack politics, which dragged the national discourse down to the level of The National Enquirer. We’ve watched the paranoid right, delusional about a “liberal bias” in the media, craft their own Bizarro-world media made up of Hate Radio and FOX News. As if countering a biased media with an equally biased media on the other side somehow evens things up.

Again, two wrongs don’t make a right. And in this case, the first “wrong” was imaginary.

We’ve witnessed an eight-year smear campaign against Bill Clinton that saw an unjustly-respected TV preacher go on his tax-exempt info-preacher show to sell videotapes that “proved” that Clinton was a murderer, a thief, and a card-carrying member of the ACLU. All of this because he committed the unpardonable sin of winning an election.

That was way the hell more than two wrongs.

Now we have Sarah Palin trying to score political points against David Letterman. She gave her first interview to a real media outlet in months to The Today Show on NBC, which made sure that the interview got heavy play on their cable channel, MSNBC.

You realize, of course, that…just maybe…NBC has a vested interest in prolonging any bad press that Letterman might get. See, Letterman has been soundly beating Conan O’Brien in the late-night ratings since the third day of their head-to-head competition.

It was a stunt for them. One that didn’t seem to work. Letterman’s ratings have skyrocketed during this feud.

I bet Palin is one of the first guests on Jay Leno’s 10PM show this fall. I bet no one will care by then, either.

Palin accepted the Republican nomination for the office of Vice President with the full knowledge that her daughter was pregnant and unmarried, and that her family’s life would be put under a microscope by the press. She decided that her political ambition was more important than her family’s privacy. This puts her in the same category of selfish politician as John Edwards, who announced his run for the Presidential nomination even though he knew he had an affair and out-of-wedlock child that would easily be discovered if he ran. You can’t run for a major national office and expect to be treated with kid gloves. That’s simply not realistic.

FestivALL. You know about it, right? Go here for more coverage.

Saturday night in South Charleston, The No Pants Players tear up the family-friendly improv stage starting at 8 PM. Admission is six bucks.

Mariel Van Dalsum will be reading from and signing her new children’s book, “The Boy with the Bird on His Head” at Taylor Books Saturday from 11 AM to 2 PM. You may remember Mariel from her impressive turn as Miceala in the WVSO production of “Carmen” a couple of years ago. In that role, she inspired a piece of Monday Morning Art, which you can see here.

This PopCulteer will be stopping by Taylor’s and visiting Art On A Stick and hanging out at Davis Park Saturday afternoon. Friday night I’m hitting Buswater. Sunday I’m editing RFC 74.

Cool Comics Of The Week

Two short but sweet recommendations, both from Boom Studios, this week.

First, Worldwide best-selling sci-fi writer Philip K. Dick’s award-winning DO ANDROIDS DREAM OF ELECTRIC SHEEP? has been called “a masterpiece ahead of its time, even today” and served as the basis for the film BLADE RUNNER. BOOM! Studios is going to present the complete novel transplanted into the comic book medium, mixing all new panel-to-panel continuity with the actual text from the novel in a ground-breaking 24-issue maxi-series experiment illustrated by COMA and WOLF artist Steven Dupre!

San Francisco lies under a cloud of radioactive dust. The World War has killed millions, driving entire species to extinction and sending mankind off-planet. Those who remained coveted any living creature, and for people who couldn’t afford one, companies built incredibly realistic fakes: horses, birds, cats, sheep… even humans. Rick Deckard is an officially sanctioned bounty hunter tasked to find six rogue androids — they’re machines, but look, sound, and think like humans – clever, and most of all, dangerous humans. This one hits comic book stores in a few weeks.

From Boom Kids comes The Incredibles. Mr. Incredible faces his most dangerous challenge yet—the loss of his powers! Is it psychological? Is it an alien virus? Is it just old age? Summoning up all courage, Mr. Incredible takes a terrifying trip to Doc Sunbright, an eccentric doctor who treats superheroes! This is a cool translation of the Disney/Pixar film, written by Mark Waid (Irredeemable, Kingdom Come) and drawn by Marcio Takara. This is a great entry-level comic for younger kids, but it’ll hold the interest of older readers as well.

From May 2007, this episode of RFC features music from Josh Buskirk, Whistlepunk and The Feast Of Stephen, plus classic animation by Wladislaw Starewicz, which replaces Pentagram Flowerbox. This was the episode which provoked the split between RFC and PF.

That’s it for this week. Next week look for more of our “Drive To 75,” plus the brand-new RFC 74 with J. Marinelli and Slate Dump. We’ve got a busy week ahead with Ann Magnusun’s show, GWAR coming to IWA East Coast, Kathleen Coffee at UUC, The Marx Toy Collector’s Convention in Wheeling and the Adults Only fundraiser than The No Pants Players are holding for Kanawha Players a week from Saturday.