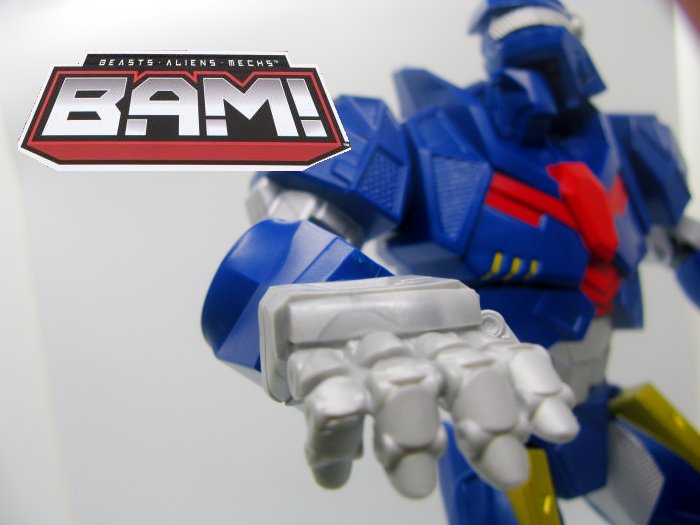 It’s rare these days that a major toy company releases an action figure line that is “original equity.” That means that it’s a toy that is not based on an existing entertainment property from a movie, TV show, videogame or comic book.

It used to be the industry norm, back in the days when we got such imaginative toys as the original GI Joe, Major Matt Mason, Johnny West and other original, non-licensed creations. Toy companies would use entire concepts developed by their in-house designers, or snap up something from a freelance firm like Marvin Glass Associates, and releae them without a media tie-in.

That practice fell by the wayside in the 1970s, when Kenner’s Six Million Dollar Man and Star Wars toys dominated alongside MEGO’s World’s Greatest Superheroes action figure lines. Since then the vast majority of toys have to have some kind of media tie-in in order for a major toy company to invest in bringing it to retail shelves. 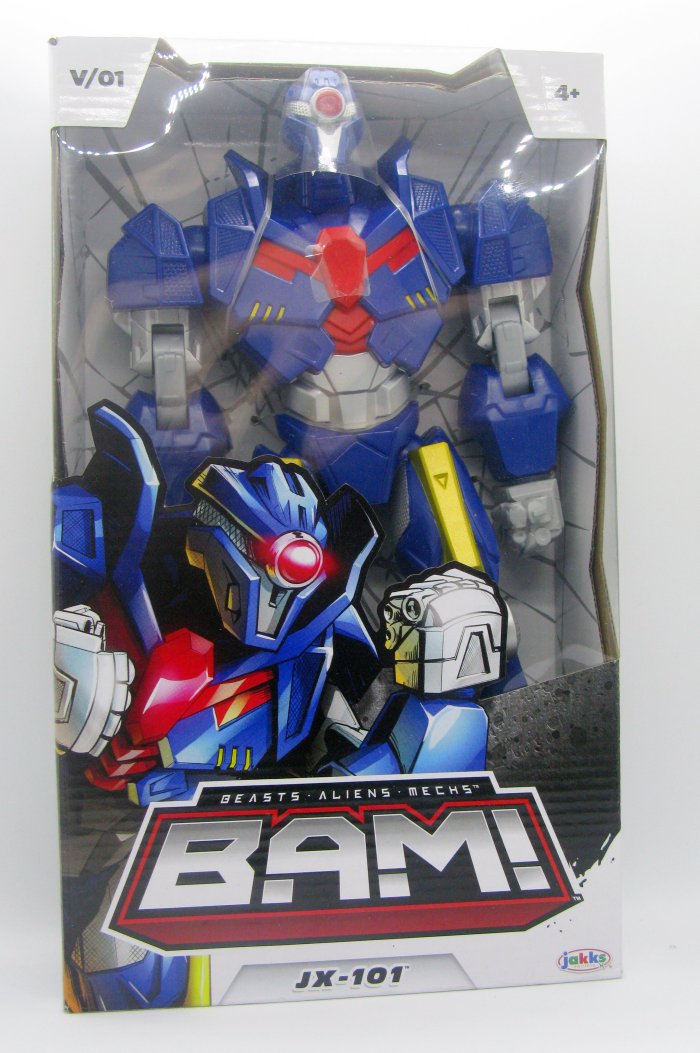 That’s why it was a shock for me to find a new toy line from Jakks Pacific last fall that had no media link at all. BAM! (which stands for Beasts, Aliens, Mechs) turned up at Big Lots and Walgreens, and was soon available online from retailers like Amazon and Big Bad Toy Store. I’m sure this line will turn up in other stores soon, but if you want them now, Amazon has them all in stock. I think it was in November that I first saw them.

I was neck-deep in compiling The 2020 PopCult Gift Guide at the time, and just recently got my hands on a couple of  the figures to review.

It’s a simple line with only three figures. Saber-Jaws, a werewolf type guy, JX-101, a robot (or “Mech”) and Kronax, an alien.

The figures stand a bit over 11″ tall, and cost about ten bucks each. What I love about these is the description on the back of the box…

Beasts, Aliens and Mechs, the most powerful warriors in the universe! Their epic battles will shape Earth’s future. Are they heroes or villains? 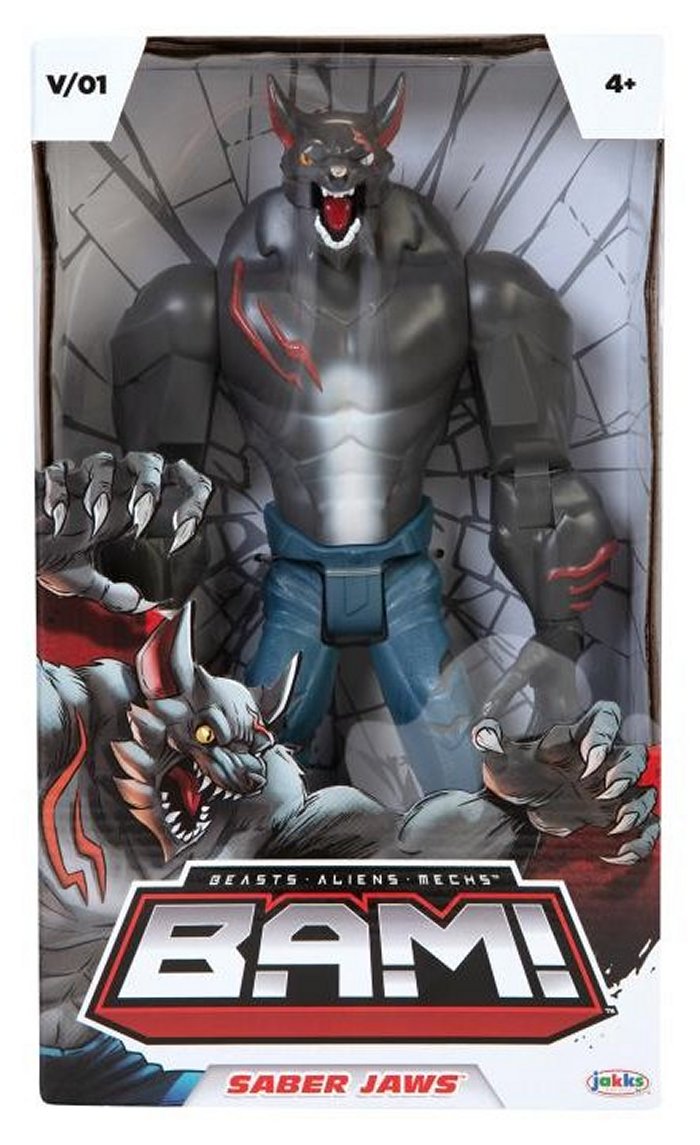 This is an action figure line that actually encourages kids to use their imaginations and play with them however they see fit! This is so refreshing!

When I was a kid, I was a stickler for scale, but not for continuity. My GI Joe went on adventures with Johnny West and Captain Action, but my Major Matt Mason hung out with my Zeroid, Gumby and Pokey and the weird bendy Batman and Robin I had that smelled really funny.

These toys are clearly aimed at the kids who are playing with the Marvel Titan Heroes 12″ figures, as well as the new Spin Master 12″ DC figures and similar-sized figures for HALO and Power Rangers. They can be good guys or bad guys. 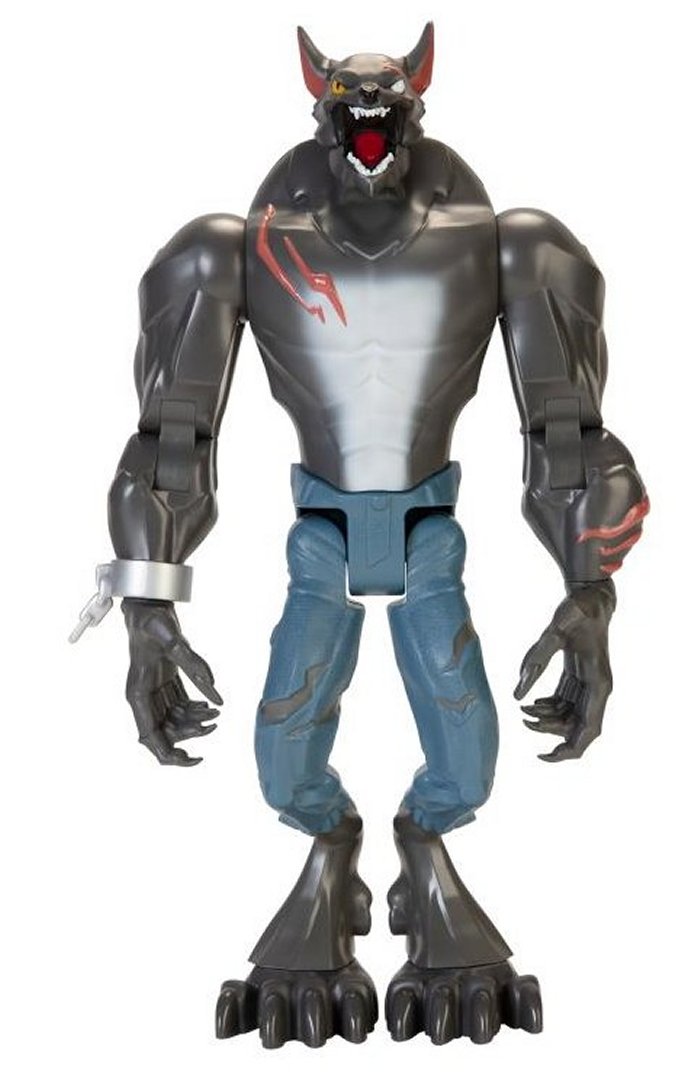 As for the figures themselves, I have to admit to giving a pass to Saber Jaws. He was the first one I saw in person and I was not terribly impressed. I may warm up to him at some point, but a humanoid animal is just not going to punch my buttons the way an alien or robot will.

The design on all three figures is a bit angular, but that’s really only a negative with Saber-Jaws, who with the addition of bat-wings could pass for a Man-Bat figure from the 12″ Justice League Action line that Mattel released a few years ago.

The figures all seem to offer eleven points of articulation, at the knees, hips, shoulders, elbows, wrists and neck. Some of the range of motion is limited by the sculpts, but they’re very playable toys. Each figure has a weird bend in their lower legs, but they still balance fairly well when posed.

There are no accessries included, and their hands are rigid plastic and are not designed for gripping.

Paint ops are scant, but very well-executed. The figures have four-to-six painted details each.

With Kronax and JX-101 in hand, I took some photos and offer a more-detailed review…

Kronax is “King of the Bounty Hunters…chosen to hunt and defeat the deadliest legends in the universe or risk losing his crown!” 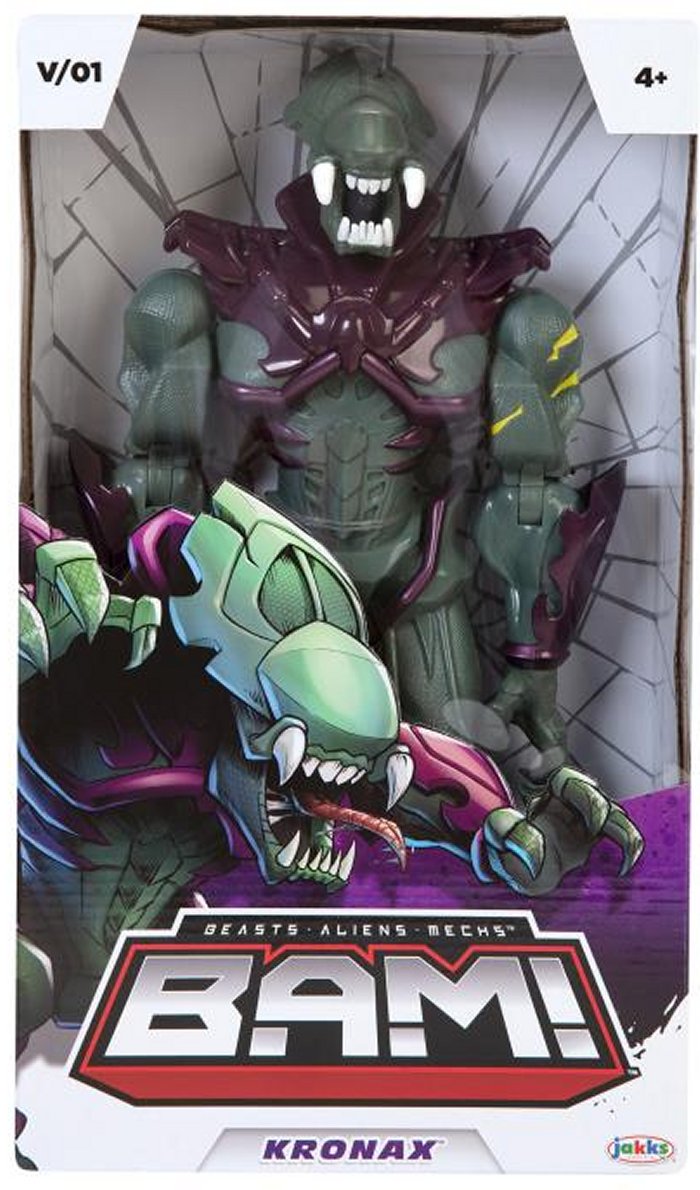 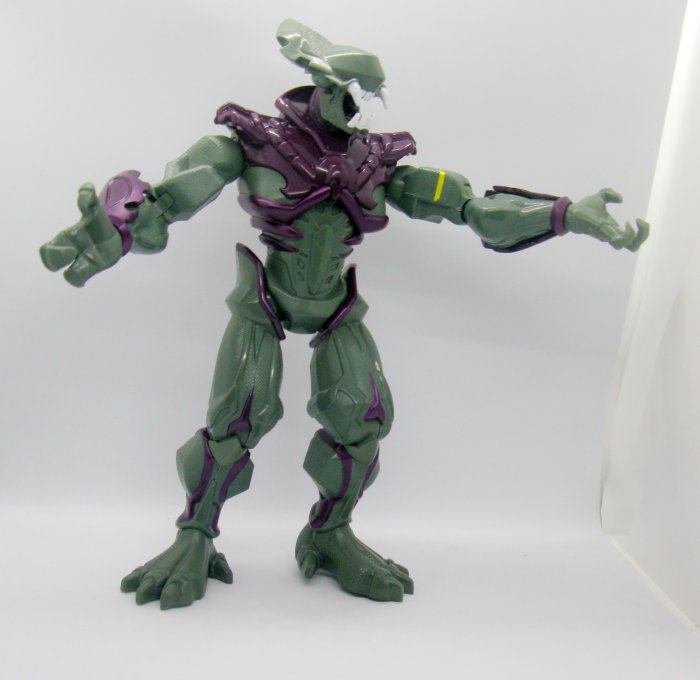 Kronax has decent balance and a fair amount of posability. He may be doing a comedy routine in this shot. 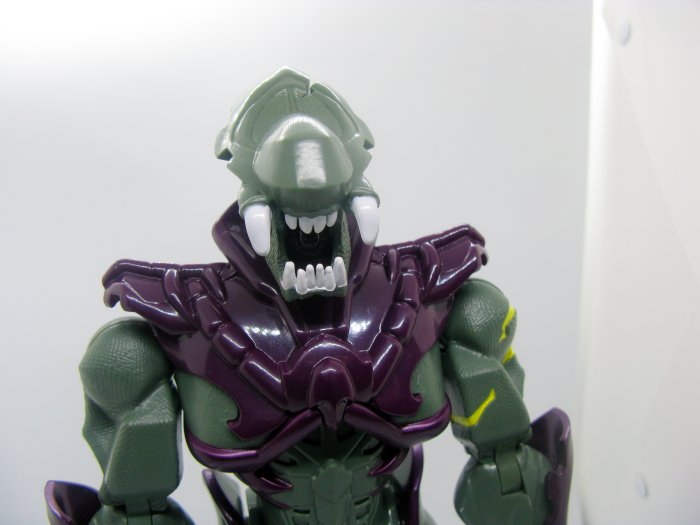 Close up you can see the detailed sculpt, and notice that he looks like a Predator with an Alien head. 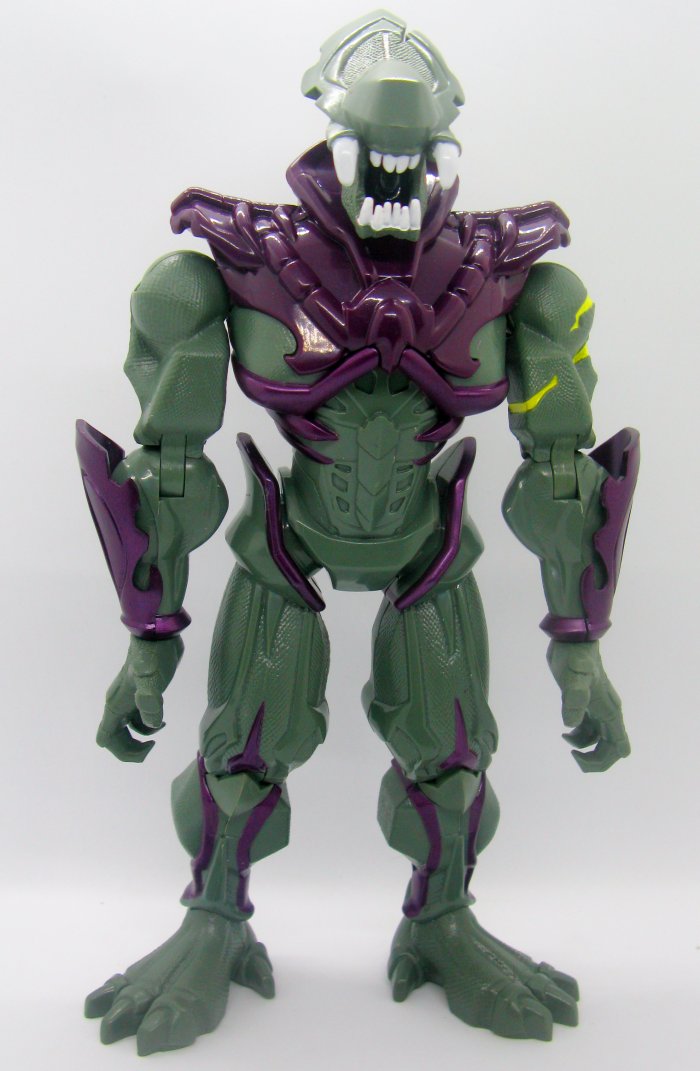 Here is Kronax unboxed, in all his glory.

Kronax is basically like a Predator, only with a head more like H.R. Giger’s Alien.  It’s a very cool figure with a detailed sculpt. His body sports a fabric-like texture, with armor plates over it. His exposed hands and feet have claws and talons.

The photo of the prototype on the back of the box shows Kronax molded in bright green, with vac-metalized purple armor. The actual toy sees the body molded in more of a dull gray-green, with non-metallic purple used on the armor. The more subdued color scheme actually looks a bit cooler.

JX-101, “Created by the Military to protect and serve until it became self-aware and escaped. Now it seeks to create an Army of Machine Warriors in its image!” 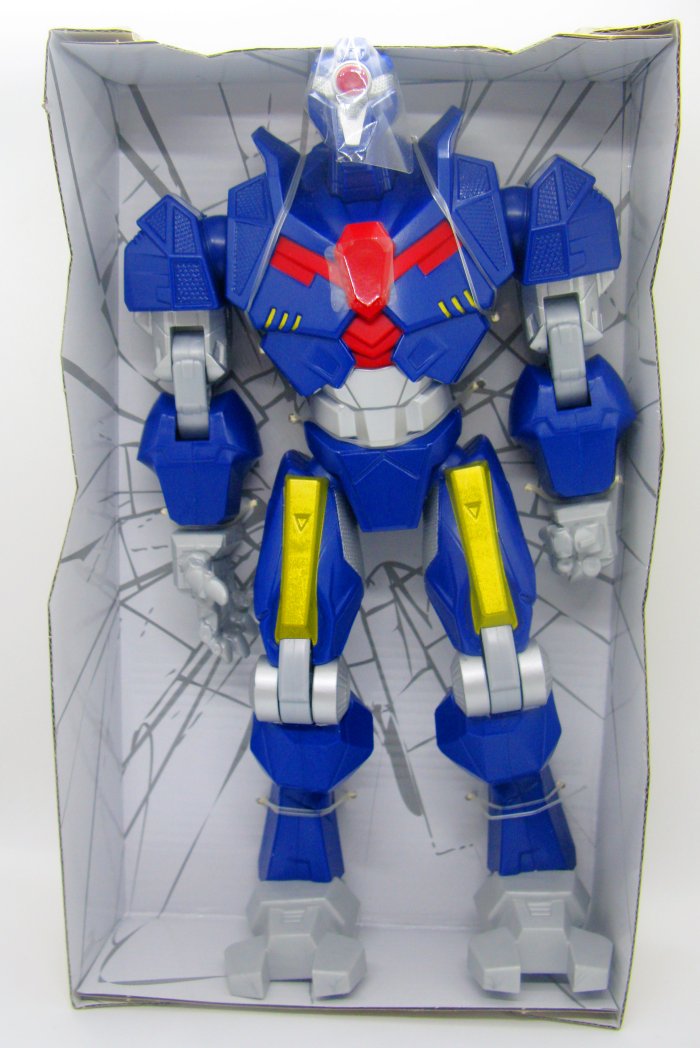 JX-101 fresh out of the box, still attached to the backing card. 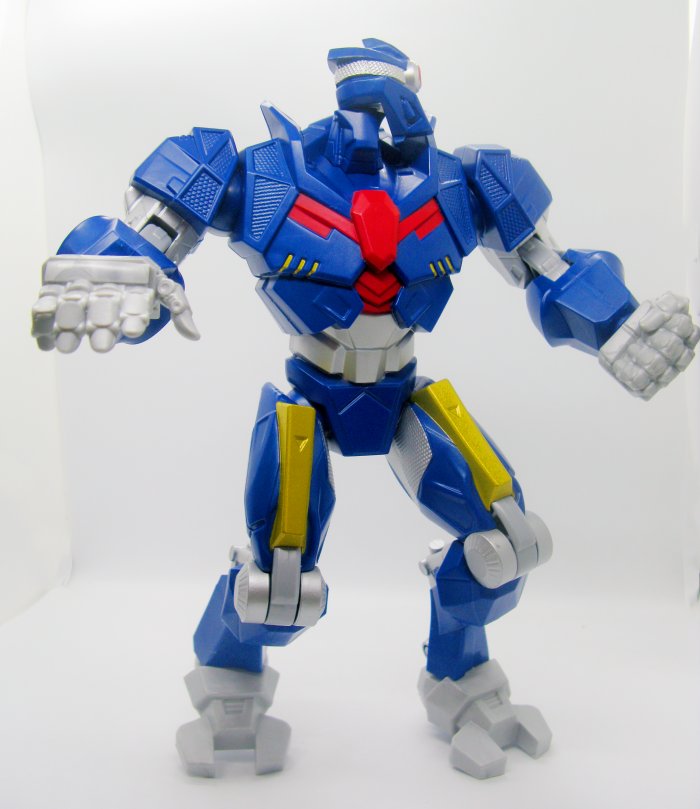 He can turn his head and pose pretty well. 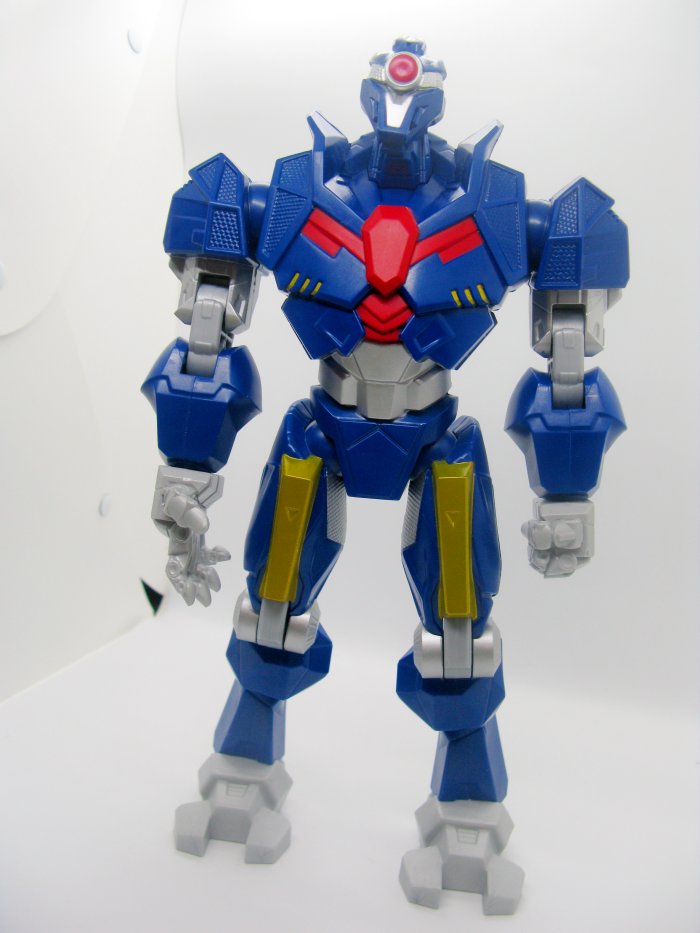 Not at all bad for ten bucks. You could put him with 1/18 scale figures and use him as a Kaiju-fighter.

The description makes him sound like a bad guy, but JX-101’s color scheme is straight out of the hero design book. He is predominantly blue, with silver/gray, red and yellow highlights. The colors match the prototype on the back of the box.

This figure looks pretty cool and balances well. One hand is formed into a fist, while the other is open.

These are pretty cool toys. Unless a kid is hung-up on keeping their toys brand-exclusive, I can see these being a big hit. They can be the nemesis or a sidekick to their other toys.

Customizers and kitbashers looking for fodder for projects should consider these guys, who could work as-is, or they could be customized into something more specific. The plus is that these are not instantly recognizable since they aren’t licensed properties. They’re also cheap enough to buy in bulk without breaking the bank.

As I mentioned earlier, the articulation is better than average for cheap large-scale figures, and the figures balance pretty well. The figures are compatible, size-wise, with 1/6 scale figures, but do not tower over them. 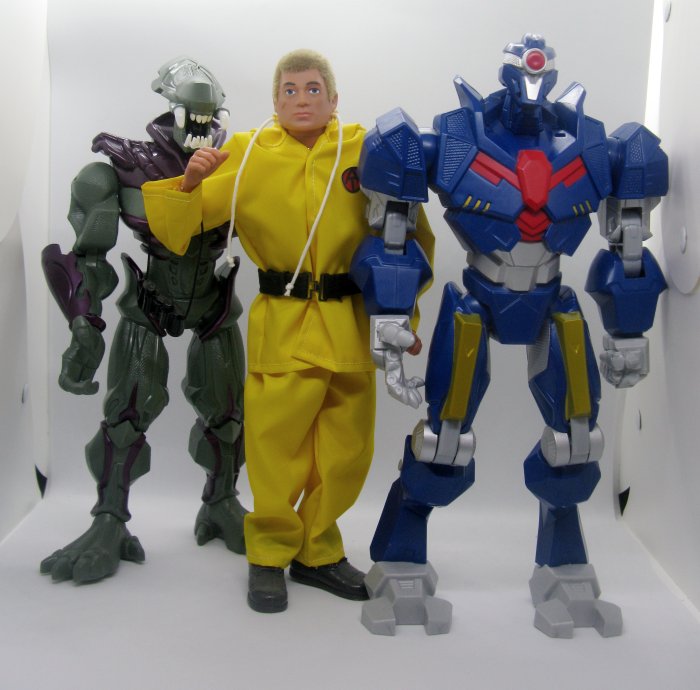 Pros: Price (ten bucks a pop); size (1/6 scale); articulation; and a coolness factor that transcends their generic and derivitive qualities. Lots of potential for customization.

Cons: Limitations to their range of movement; angular design which may put off some folks; very small heads in relation to their bodies; lack of gripping hands; no accessories.

Overall, BAM! looks like a cool, fun experiment from a toy company that is struggling to find a new hit. Oddly enough, these do not appear on the Jakks Pacific website, which may indicate a lack of faith in the concept.

It’s a shame, because somebody could come along and decide to develop a comic book or web-series based on BAM!, and then Jakks would control the licensing. I hope I’m wrong and Jakks decides to expand the line, or at least market it more aggressively.

BAM! is a pretty cool toy line. If you’re interested, you might want to move fast. Although it has plenty of potential, this line may not be long for this world.