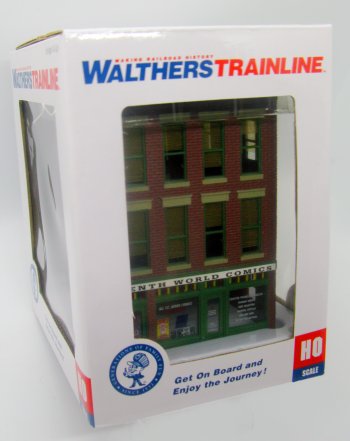 This is a bit of a first for The PopCult Toybox. Today I’m looking at two HO Scale structures, intended for the dominant scale of model railroading. Several companies make pre-built buildings that hobbyists can use to make their train layouts more realistic and interesting. Technically, these are not toys, but are marketed as “model-making products” because these have parts that are way too small to be considered toys.

Since I don’t want to start a new sub-heading, these are going in The PopCult Toybox, with the above disclaimer.

There are different levels of detail among these items, and today we’re going to look at one fairly inexpensive, less-detailed building, and another, more expensive building that comes complete with finished interiors and LED lights.

I do not currently have a train layout, but I’ve been stockpiling some of the more interesting-looking structures for when I finally have enough time and space to build one. My enjoyment of the hobby comes more from building a realistic-looking scene than from actually running the railroad, so when the day comes, I’ll be spending more time creating streets than running trains on time and keeping manifests.

First up we have 10th World Comics, a fully-assembled three-story structure, pre-painted and with decals applied. Made by Walthers with a list price of $24.98. It’s available from many hobby shops, local and online.

This s a 1/87th scale building, so it doesn’t take up a lot of space. It’s about three inches wide, four inches high and four and a half inches deep. That’s not a bad size if all you want to do is build a bookshelf street scene instead of a full-blown layout.

The inside of the building is unfinished. There are windows (with blinds) and the structure is fairly complete, but at this price you’re not going to get interiors, drains, electrical hook ups or weathering.

For some folks, applying their own details is a big part of the fun, so this is not a problem. It’s a nice piece for a layout, as you can see in the photos… 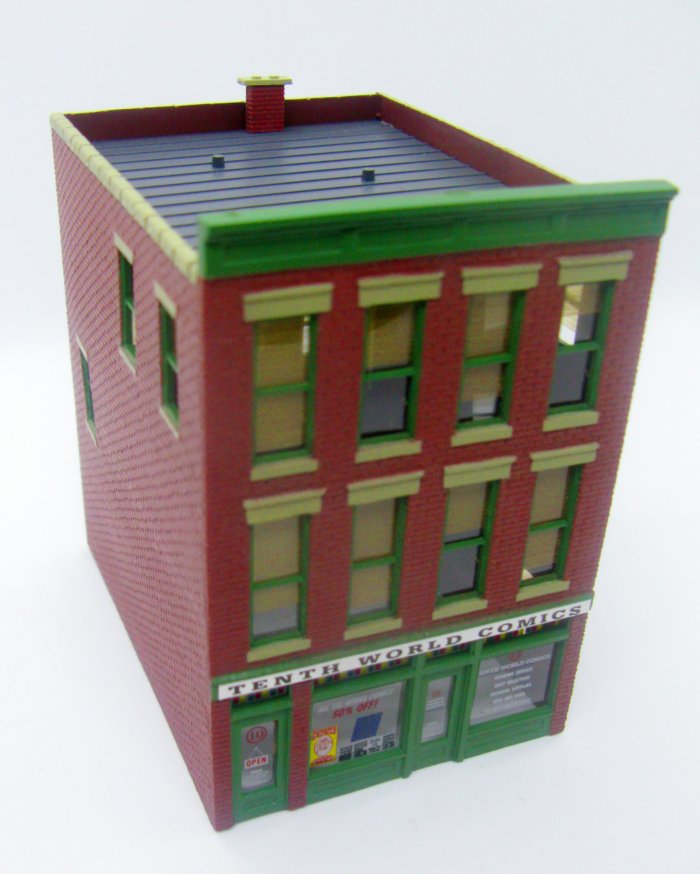 Here we see a nicely-detailed storefront, plus we get a look at the brick and window detail and some molded-on roof vents. 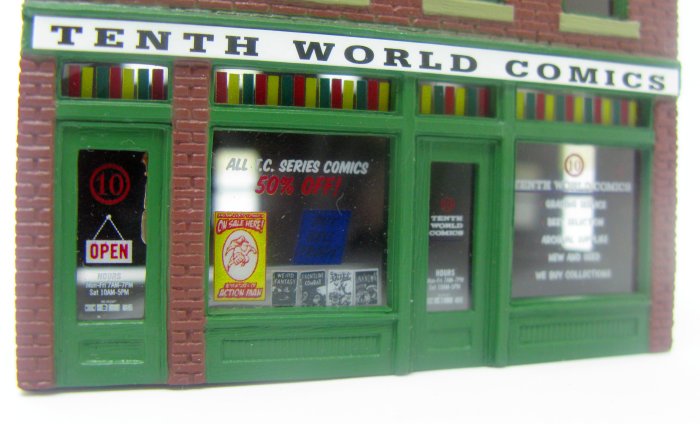 The storefront is really nicely-done. 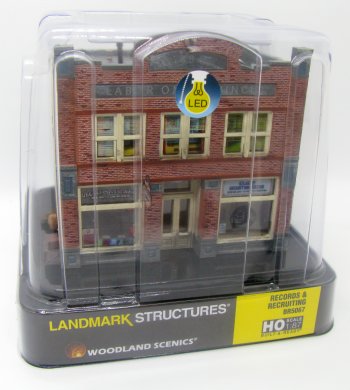 Next up we have Records & Recruiting, a much more elaborately-detailed set from Woodland Scenics. This HO Scale structure retails for $84.99, and can still be found at some hobby dealers, but it is selling very quickly.

With this set, I’m going to quote the manufacuturer’s blurb:

Whether you seek vinyl or valor, this HO scale Built-&-Ready building is the place for you. The structure features eye-catching printed interiors of a record shop, an Army recruiting office and cozy apartments upstairs. Blinds cover the windows above the bustling businesses. It is hand-painted and authentically weathered. There are also exterior details like crates and barrels, as well as decals and signage.

The structure also comes with pre-installed LED lighting made for use with the Just Plug® Lighting System.

As you can see in the photos below, the level of detail on this building is astounding. There are “ghost signs” on two of the exterior walls. The sides and back of the building have debris and a dumpster attached. There is an electrical box and wiring connections, plus a drainpipe, and realistic weathering. 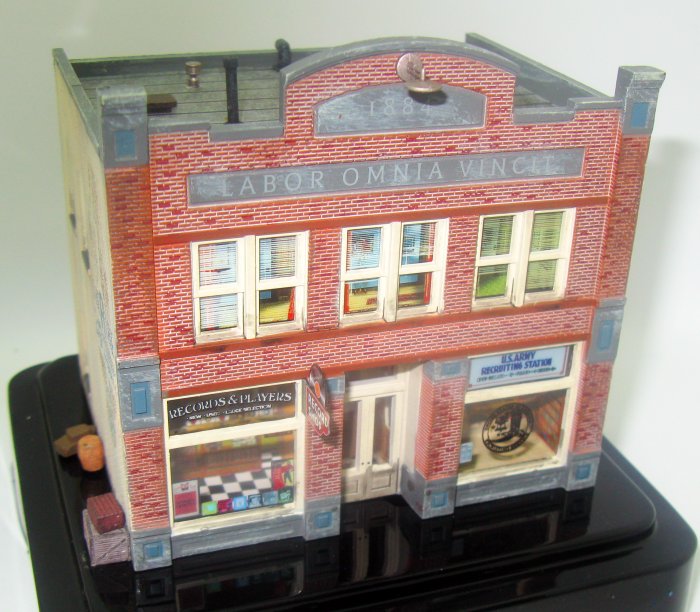 As you can see, the higher price tag brings with it a much higher level of detail with aged/painted brickwork, weathering, interiors and additional items around the building. 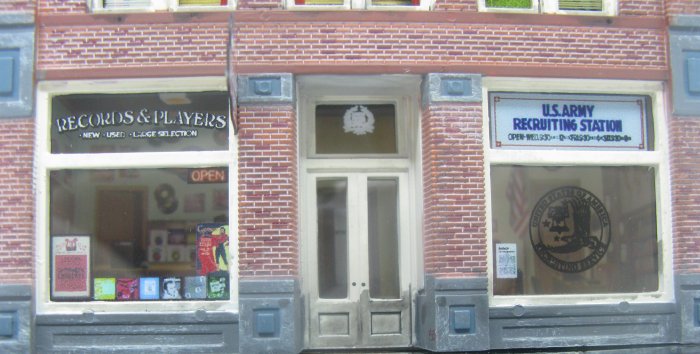 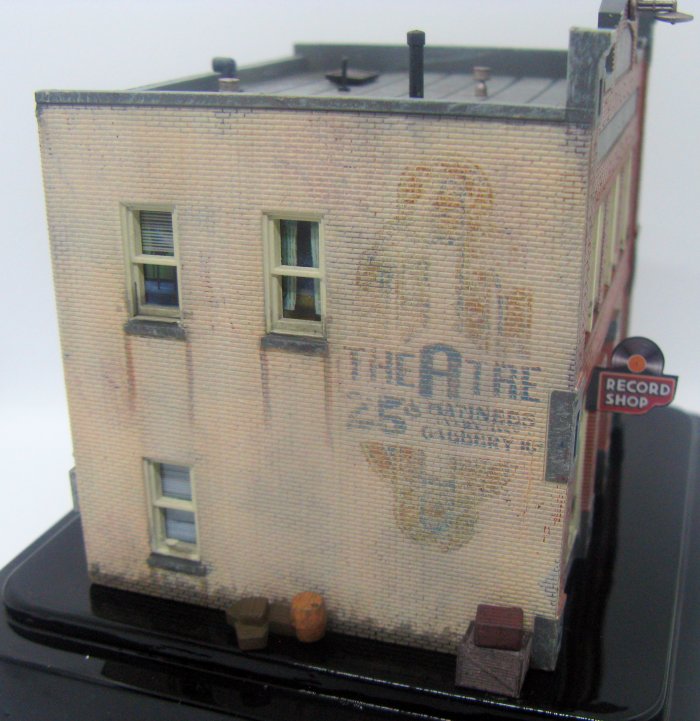 Here you can see the ghost sign for an old theater, and the realistic weathering and debris. 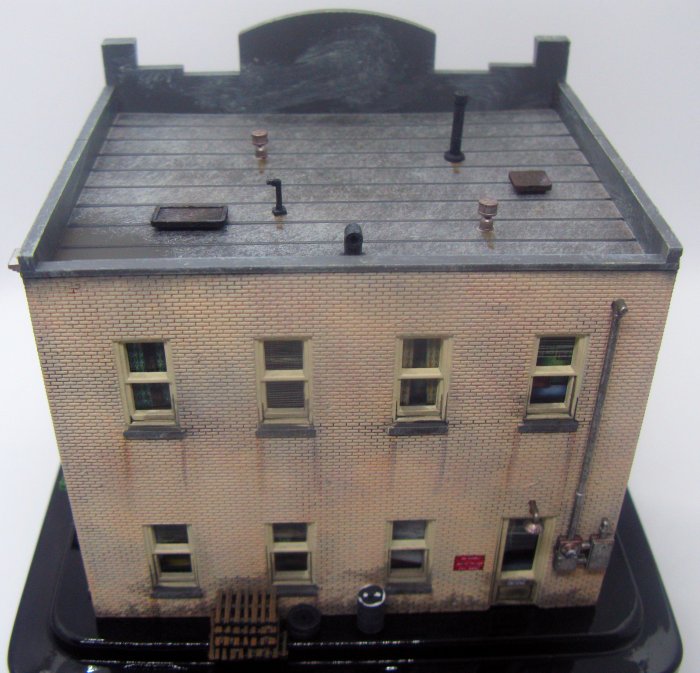 The back of the structure shows off an incredible level of detail, even inside the windows, which are hard to photograph. 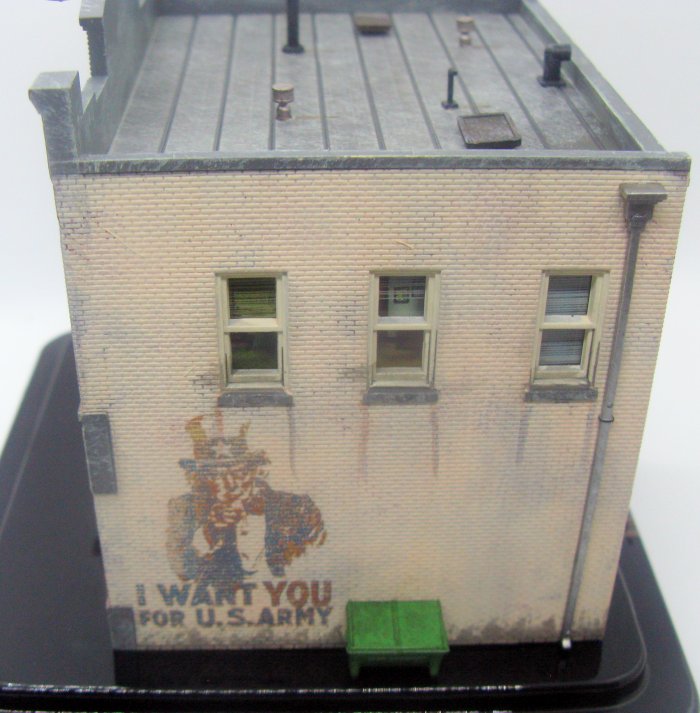 The other side of the building includes an old recruiting mural and a dumpster and downspout. If it weren’t sitting in a plastic tray, you might think this is a photo of a real building. 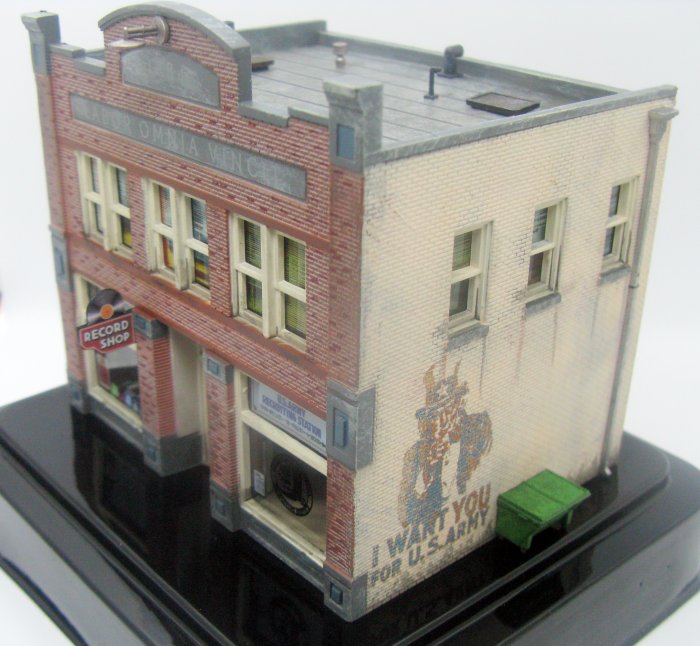 One more angled shot, so you can see the record shop sign.

I do not yet have the lighting kit to make the interiors come to life, but I plan to get one. Except for the size, this could pass for the real thing. It really looks like something you’d see in a run-down urban area.

Both of these structures serve their purpose very well at their respective price points. Model railroading is not a cheap hobby, but it can be very worthwhile, and if you’re looking to build a street scene filled with cool shops (where I might want to go), then you can’t go wrong with either of these sets. Also, keep in mind that most dealers sell this for below the suggested retail price. 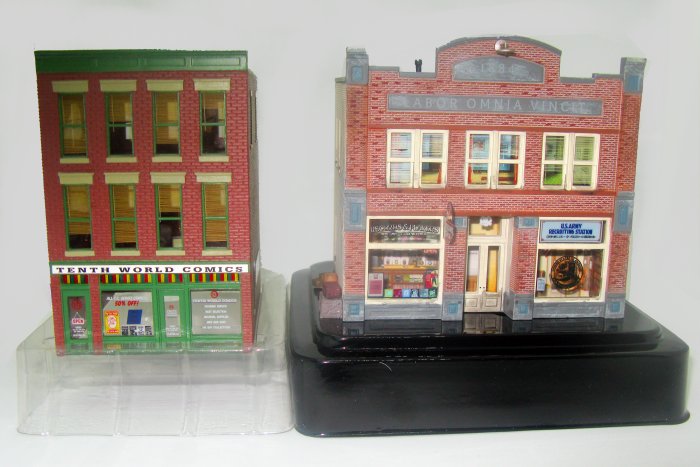